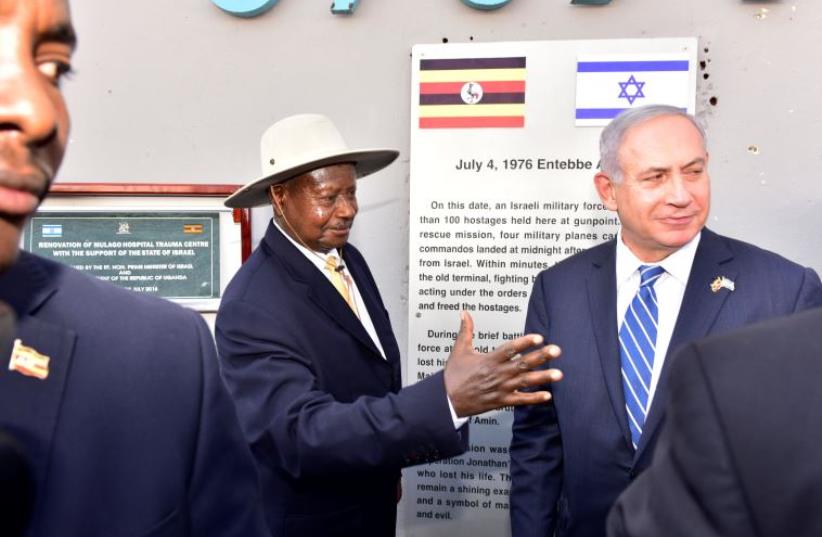 Uganda is reportedly planning to announce that it is moving its embassy to Jerusalem next week, sources close to the Ugandan president and the Ugandan Christian community told The Jerusalem Post.

A spokesperson for the Foreign Ministry could not confirm the report.

Sources close to the community told the Post that the move has been in the works for three years.

Pastor Drake Kanaabo, who ministers at the Redeemed of the Lord Evangelistic Church Makerere in Kampala, Uganda, told the Post that he had been hearing rumors about the move.

“I got a note from sources that Uganda is moving the embassy,” he said, though he noted that he was unable to confirm the rumors with senior leaders by press time.

He said it is important that Uganda move the embassy to the holy city “because of our past good relationship with the State of Israel.

“On a spiritual level, Uganda regards Israel as the mother of Christianity,” he told the Post. “Ugandan Christians are no longer standing on one leg for Israel, but two – in prayer and action. Israel is the only first-world country that is near to Uganda and Africa.”

For years, Evangelical Christians from the United States have been traveling to Uganda, spreading the messages of the Bible and Christianity and influencing policy in the African country.

Uganda’s president, Yoweri Kaguta Museveni, is an evangelical Christian. A 2009 report by NPR reported on ties between Museveni and the American fundamentalist Christian organization The Fellowship, which founded the National Prayer Breakfast in the US.

Over time, Uganda has been swayed toward Christianity. Earlier this week, the Post reported that thousands of Christians across Uganda sang, marched and waved Israeli flags while praying for the State of Israel in a series of events sponsored by Christians for Israel and Intercessors for Uganda.

If Uganda moves it embassy, it will be the third embassy to designate Jerusalem as Israel’s capital, following American, Guatemala and Paraguay, the latter which has since withdrawn the decision.

Netanyahu’s visit to Uganda will come days after the prime minister traveled to the United States to meet with US President Donald Trump and unveil the “Deal of the Century” peace plan, and to Russia to help obtain the pardoning of Israeli tourist Naama Isaachar.