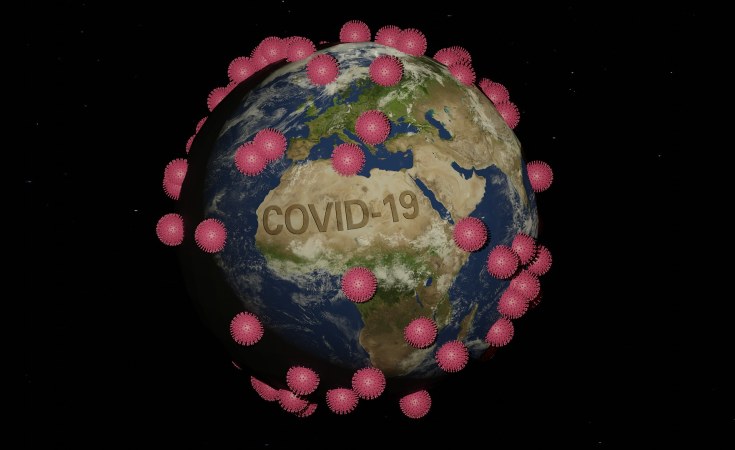 Madagascar’s President Andry Rajoelina gave a long, televised address last weekend praising the benefits of artemisia, a herbal remedy increasingly promoted as a treatment for Covid-19. It’s also gaining traction in other African countries. But the World Health Organization has warned it must be tested for efficacy and adverse side effects.

During a one-and-a-half-hour speech on Sunday, Rajoelina sat next to an artemisia plant, a bottle of artemisia tonic and boxes of Covid-Organics, the branded artemisia products that he is promoting as a treatment for the coronavirus.

“Clinical trials of artemisia-based injections on new Covid-19 patients will start next week,” said Rajoelina, saying that any criticism of the plant-based remedy must stop, according to RFI’s correspondent in Antananarivo.

The president called for people to continue following measures put in place to stop the spread of the virus. But much of Rajoelina’s address focused on artemisia. He talked about increasing production of the plant and setting up a factory to process it over the next month.

“This plant can treat lots of diseases. If we don’t act quickly, other researchers will overtake us,” said Rajoelina, as reported by RFI correspondent Laetitia Bezain.

Authorities in other African countries have expressed interest in using artemisia in the fight against Covid-19.

Tanzania’s President John Magufuli said he was in touch with Madagascar’s government and had despatched an airplane to pick up supplies of artemisia.

The scramble for artemisia

The Malagasy authorities are not the only ones to see the potential benefit of artemisia in the struggle against Covid-19 – Germany’s Max Planck Institute of Colloids and Interfaces and US company ArtemiLife Inc are also working on tests.

The study, conducted in Denmark and Germany, focuses on the same plant as the one cultivated and processed in Madagascar – artemisia annua. The plant materials for the test are being provided by ArtemiLife Inc, a Delaware-based company, that says it has fields growing artemisia outside Lexington, Kentucky.

ArtemiLife is advertising two products containing artemisia annua – tea and coffee. The company recommends that customers take the products twice daily “to maintain an active shield and to maximize the benefits”.

A 30-day supply of ArtemiCafe is to be available for sale at 91 euros and ArtemiTea for 73 euros. Customers are encouraged to register their interest on the ArtemiLife website since the products are currently in development and not yet on sale.

The company says these products are “not intended to diagnose, treat, cure, or prevent any disease”. ArtemiLife says their claims about artemisia have not been evaluated by the US Food and Drug Administration.

Artemisia annua has long been used for the treatment of malaria. The plant’s antimalarial properties were first identified in 340 BC as part of traditional Chinese medicine, according to expert Zhou Yiqing from the Institute of Microbiology and Epidemiology of the Chinese Academy of Military Medical Sciences.

Zhou’s research in the 1970s led to the plant’s application against the mosquito-borne disease.

Artemisia was selected for further research from a list of herbs and traditional medicines used to treat malaria screened by experts.

Project 523 first isolated the compound artemisinin from the plant and then ran clinical trials confirming its antimalarial effects.

ACT therapy combined artemisinin with another active ingredient to provide different actions within the same treatment. ACTs are considered by the World Health Organization (WHO) to be the most effective antimalarial medicines available today.

Artemisia in fight against HIV and SARS?

Artemisia has been researched for many other medicinal uses besides combatting malaria, perhaps providing some guidance as to its possible use in treatment of Covid-19.

A study by researchers at Leiden University and the University of Basel published in the Journal of Ethnopharmacology looked at artemisia tea infusions and their activity in combatting HIV.

Chinese researchers in July 2005 published a study exploring the use of herbal extracts for antiviral properties in treatment of Severe Acute Respiratory Syndrome (SARS), a respiratory illness caused by a coronavirus.

The research, published in the Antiviral Research journal by experts at different institutions and companies in Beijing, identified four herbal extracts, including artemisia, that could be considered as candidates for the development of drugs for treatment of SARS.

Artemisia is the subject of some questions surrounding its use against malaria, notably the form of treatment administered -either a tea infusion based on plant extracts, or artemisinin, which is usually produced by pharmaceutical companies through a chemical process of semi-synthesis.

A January 2019 documentary produced by France 24 asked whether the use of artemisia tea infusions for malaria treatment was discouraged and subject to pressure by big pharmaceuticals.

The documentary suggested that offering infusions based on the plant could threaten the business of synthetic ACT treatments produced by drugs companies.

At forefront of this battle is Congolese doctor Jérôme Munyangi from the faculty of medicine at the University of Kolweri-Lualaba.

Munyangi has conducted research in the Democratic Republic of Congo comparing tea infusions to an ACT treatment using a combination of artesunate, a derivative of artemisinin, and amodiaquine, another commonly used antimalarial drug.

The large-scale, double blind randomised clinical trial was published in the Phytomedicine journal in April 2019. It concludes that infusions of artemisia annua and artemisia afra, another species of the plant, provide better outcomes than the ACT treatment.

Use of the artemisia plant is outlawed in France. The French health ministry has warned about a lack of rigorous, methodically controlled clinical trials proving its effectiveness. The National Agency for the Safety of Medicines and Health Products (ANSM) has previously acted to ban products based on artemisia.

French non-governmental organisations such as La Maison de l’Artemisia continue to promote the plant’s use as a malaria treatment, claiming “the plant can save millions of lives”. The NGO focuses on countries in sub-Saharan Africa, encouraging the use of artemisia as a tea infusion, although it warns people from outside malaria-endemic countries against taking it.

Malaria and Covid-19 not the same

Artemisia’s use in treating malaria is clearly beneficial in the fight against the deadly parasite, although some raise questions about the exact nature of the treatment. But its use in combatting malaria does not necessarily mean it will be effective against Covid-19.

The African Union bloc said it was in contact with Madagascar with a view to obtain technical data regarding the safety and efficiency of artemisia used to treat Covid-19, according to a statement.

“It was agreed that the member state would furnish the African Union with necessary details regarding the herbal remedy,” the AU said on Tuesday.

The Africa Centres for Disease Control and Prevention (Africa CDC) would “review the scientific data gathered so far on the safety and efficacy”, the AU added.

Frank van der Kooy, who led the research on artemisia and treatment of HIV at Leiden University and the University of Basel, told RFI that he could not continue this work due to a lack of funding, while research on its use against SARS must be “cautiously interpreted”.

“At the moment we are therefore not sure if artemisia annua/afra will be active against Covid-19 but I do believe it warrants conducting clinical trials, which in turn needs funding,” said van der Kooy, who currently works at North-West University in South Africa.

The WHO is careful not to rule out the possible use of artemisia as a treatment for Covid-19, saying it should be tested for its efficacy and adverse side effects.

“Africans deserve to use medicines tested to the same standards as people in the rest of the world,” the WHO said in a statement published on Monday. “Even if therapies are derived from traditional practice and natural, establishing their efficacy and safety through rigorous clinical trials is critical.”

“Many plants and substances are being proposed without the minimum requirements and evidence of quality, safety and efficacy. The use of products to treat Covid-19, which have not been robustly investigated can put people in danger, giving a false sense of security and distracting them from hand washing and physical distancing which are cardinal in Covid-19 prevention,” the WHO added.