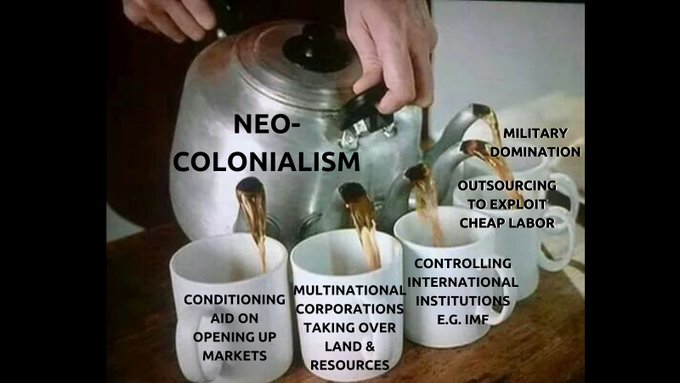 The year 2022 has come to an end and it has become a symbol of universal “de-Westernization.” The criticism of the West is growing everywhere not only for its unwillingness to resolve the Middle East conflict between Palestine and Israel and to reach an agreement on the nuclear dossier with Iran, but also for the general energy and financial and economic crisis inspired by Russophobic sanctions.

And a demonstrative reaction to such an openly inhumane policy of the West was the refusal of most countries of the world to impose sanctions against Russia after it launched its special military operation to denazify the criminal Kyiv regime, as well as the adoption on December 30 of the UN General Assembly of an appeal to the International Court of Justice on the issue of Israeli occupation of the Palestinian territories in the West Bank. It should be mentioned that the countries of the African continent took the most active position in “de-Westernization,” demonstrating their opposition to the attempts of the West to return to the policy of neo-colonialism.

Undoubtedly, an important factor in taking such a position by African countries was the opposition to the continuation by former Western colonial powers of the policy of plundering the natural and national wealth of the Dark Continent. Especially energy resources in light of the EU’s rejection, under pressure from Washington, of Russian gas and oil. Thus, the European Union, under various pretexts, tried in April to force Nigeria to increase gas production and redirect it to the European gas market. In response, the Nigerian president said that Europe was seeking to withdraw almost all of the hydrocarbons produced from Africa and leave the continent with nothing. The country’s oil minister, on his part, said that the national oil company of Nigeria was working at its limit, and an increase in energy production in African countries was possible only in a few years. And only after the West invests billions of dollars in the form of investments in the development of new deposits.

As for Western corporations, not only are they in no hurry to invest in Africa, but through the international financial structures of the United States and Europe they are threatening to cut funding for African states and stop issuing loans to them if they do not support calls to invest in the construction of “green energy” sites imposed by the West.

As follows from official statistics and the conclusions of numerous experts, the losses of African states from the operation of Western corporations annually exceed $192 billion. Western oil and gas corporations, which receive most of the profit from the sale of African resources, cause particular damage to African countries. At the same time, the flow of annual Western investments to African countries is significantly less than the “solidarity assistance to the Kyiv regime” for armed confrontation with Russia. Thus, the EU and several member states, according to German media reports, allocated €1 billion to African countries as part of an initiative to overcome the effects of climate change. Meanwhile, the EU budget for 2023 has been provided with €14.7 billion for the energy transition (primarily for non-EU Ukraine and Moldova). From the end of February 2022 – after the start of the Russian military operation – the volume of international aid to Ukraine has exceeded $75 billion, and the largest donors of military and humanitarian aid have been the United States and the EU.

Realizing that over the past few years the position of the West on the African continent has been greatly shaken, and acknowledging that the influence of Russia, on the contrary, has increased, the White House held the US-Africa Leaders Summit in late December, which has been its only second edition since 2014. At the same time, it is noteworthy that during his tenure as President of the United States, Joe Biden has never visited a single country of the Dark Continent, clearly not considering it necessary to do so himself, and in rare cases preferring to delegate his vassals for this.

And so, on December 11, the British Foreign Minister James Cleverly, frankly demonstrating the UK’s desire to continue exploiting the natural resources of African countries, announced London’s intention to increase its expansion in Africa.  At the same time, when analyzing the UK’s “Africa U-turn,” London’s recent “special plans” for Rwanda stand out, which are supposedly justified by an attempt to solve the problem of illegal migrants, who will now be sent to this African country, where asylum seekers will wait decisions on their applications for immigration to the UK.

However, such British plans are not something new in the African policy of the Anglo-Saxons. And painfully, they are repeating the “Liberian project” of the United States of the early 19th century to resettle black Americans to Africa in order to create a stronghold on the Dark Continent. Quite infamously, back then, in 1822, such “settlers” from the United States, who called themselves Americo-Liberians, founded, under the auspices of the American Colonization Society, a colony of “free men of color” on a coastal area of more than 13 thousand square kilometers, by paying the leaders of local tribes 50 US dollars. This “settlement” in 1824 was named Liberia. Subsequently, it began to actively increase due to the annexation by Washington by 1828 of part of the coast of modern Sierra Leone and Côte d’Ivoire. In accordance with US plans for such expansion, these settlers did not seek to get closer to the African community, calling themselves “Americans.” The symbols of their state and the chosen form of government reflected the American past of the Americo-Liberians. Throughout the history of this country, they, in their relations with neighboring peoples, sought to dominate the local black population, which they considered barbarians and people of the lowest grade.

Something similar is now happening in Rwanda through the efforts of the current London administration, which is thus trying to start a new wave of conquests of the Dark Continent. However, these attempts of London are unlikely to be effective, because even the United States did not succeed in making Liberia a “European state,” and today it is one of the poorest countries in the world. This will not work for the UK either, whose empire, according to British media itself, collapsed long ago, leaving only colonial ashes…

Nevertheless, to provide “assistance” to such a project, various attempts are being made by London, and the forces of British PMCs have already been engaged, whose number has been growing noticeably in Africa as of late. In principle, this is not surprising, since in its modern form a private military company (PMC) is a British invention that appeared in 1967 as a result of the creation by David Stirling of the first official PMC Watchguard International (WI). As for the UK’s decision to more actively use military tools for its expansion in Africa, back in 2019, the chief of the UK’s Defense Staff, Nick Carter, said that London needed to strengthen its military presence in Africa, including through a more active presence of British PMCs. In order to fulfill London’s instructions to intensify work in Africa, the founder of the private military company Executive Outcomes, Eeben Barlow, has already announced the resumption of the activities of this PMC, which operated in Africa in the 1990s. Moreover, according to Barlow, it “will be active not only on the battlefield, but also in the field of information warfare.”

Today, Western PMCs are a go-to tool of Western expansion, including in terms of confrontation with Russia and China in Africa. Especially against the backdrop of the growing interest of the countries of this continent in cooperating with states that are by no means Western.

Time to define a new approach to Africa’s economic development