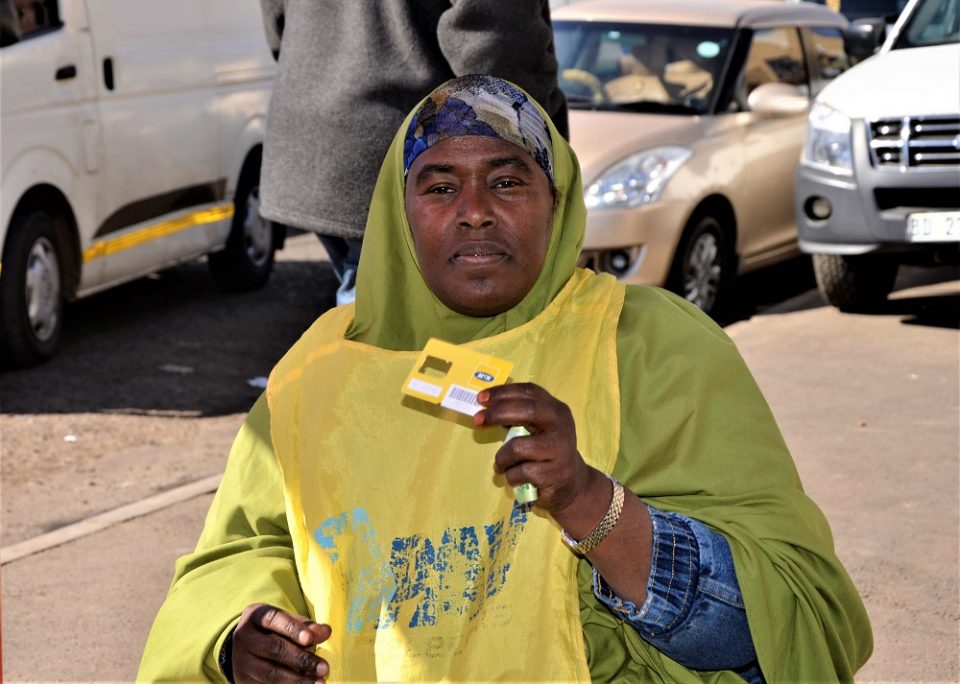 In the hallway of a large, brick-face apartment block in Johannesburg, Halima Jawahir greets her tenants, a group of six Somali women drying their henna-painted hands in the sunlight streaming through the windows.

After fleeing ongoing civil war in her native Somalia in 2016, Jawahir is now reinventing herself as a property mogul in the Mayfair neighbourhood in Johannesburg, South Africa’s biggest city.

She rents an entire building of more than 100 flats from a South African landlord, before sub-dividing them into rooms, and subletting them to other mainly Somali and Ethiopian refugees.

But as a refugee without documentation, Jawahir is also breaking the law by subletting flats – a risk worth taking, she said, to save up enough to one day own her own property.

“I am a widow, so I have to look after myself,” said the 45-year-old, adjusting her green hijab as she sat on the couch in her second-floor flat.

The United Nations estimates that at least 30,000 Somali refugees live in South Africa.

The country is wrestling with a massive backlog of asylum applications, according to human rights groups, leaving many refugees waiting months or even years for the authorisation to work, go to school and find a place to live.

Faced with this legal and economic uncertainty, some Somali women are challenging social norms and navigating the male-dominated property market in the hope that, one day, they will have the security that comes with owning a place of their own.

Jawahir’s building is one of about a dozen properties in Mayfair that are being rented and then sublet by Somali refugee women, according to the Somali Community Board of South Africa.

For renters, subletting provides a stable source of income, and for their tenants it is often the only way they can afford a place to live, said Jawahir.

This is especially true for refugee women, many of whom are running their households and raising their children alone as they wait in limbo to be granted refugee status.

“Undocumented migrants do not qualify for government housing or subsidies and the impact of this overburdens mothers,” said Tiffany Ebrahim, a researcher at the Socio-Economic Rights Institute of South Africa, a human rights organisation.

“And the private (housing) market is inaccessible because it is so expensive, forcing people to fall back on solutions that are temporary with little security of tenure.”

Jawahir, whose name was changed to protect her identity, said that “as refugees and as women, we are always hustling”.

Jawahir left Mogadishu for South Africa in 2016, after men robbed her at gunpoint at her home, killing both of her parents.

“One bullet is still in my elbow,” she said, pointing to scars across her arms and legs. “It makes it difficult to lift heavy things.”

Once she was settled in Mayfair – a neighbourhood so popular with the Somali diaspora that it is known as Little Mogadishu – Jawahir took the same route as other female Somali refugees in the area and set up her own business subletting flats.

To supplement the rental income, she uses her contacts in Saudi Arabia, Dubai and East Africa to import perfumes, jewellery, honey, and shoes to sell in both stores and markets in Mayfair. She also sells cellphone credit to passersby.

At the end of each month, Jawahir said she sends about $350 home to her family in Mogadishu, the Somalian capital.

Any extra money is put aside for future needs, including the possibility of one day buying the property she now rents out.

“If my husband was alive, he would be happy for me,” Jawahir said. “Look at me, I am alone but empowered. I did this all by myself.”

‘A DREAM FOR MANY’

Although subletting is legal in South Africa, doing so without proper documentation showing asylum or refugee status could lead to evictions – for both the original tenant and the subletter, Jawahir explained.

And many have no other option, noted Abigail Dawson from the Consortium for Refugees and Migrants in South Africa.

“We find that it is easier for many to fly under the radar, as the process of becoming ‘legal’ is such hard work,” she said, referring to the backlog of refugee status appeals not yet processed by the government.

The Department of Home Affairs and the South Africa Human Rights Commission were not available for comment.

For Somali women in South Africa, many of whom lack a basic education and have no legitimate job prospects, the risk of subletting to others is worth it for the chance to one day own their own home, said Omar Muhammad from the Somali Community Board.

“Many of them (Somali refugees) cannot even speak English, so have little freedom to find opportunities outside their community,” he told the Thomson Reuters Foundation in his office in Mayfair.

“Property ownership is a dream for many, because it would mean full independence.”

The benefits that refugees get from owning property are not limited to money, added Ebrahim from the Socio-Economic Rights Institute.

“Location is everything,” she said. “Having a secure place to live could be linked to accessible hospitals, schools, economic opportunities and most importantly, social networks that are needed in difficult times.”

Indhonuroon Farah brought her five children to South Africa from Somalia 10 years ago, after her husband was killed in clashes between Somali clans when returning from work.

She managed to secure her refugee documentation soon after – this was before the height of the application backlog – which meant she could send her children to school.

“I arrived here with nothing and no one,” said Farah, sitting behind the counter of her shop in Mayfair, where she sells fabrics, shoes, Kenyan honey and beaded bracelets.

“I would sell goods in townships all over South Africa and eventually made enough money to buy a property in Somalia,” she said, adding that it is more socially acceptable and affordable for women to own property in her home country.

She now rents that property out for extra income. Eventually, she wants to do the same in her adopted home.