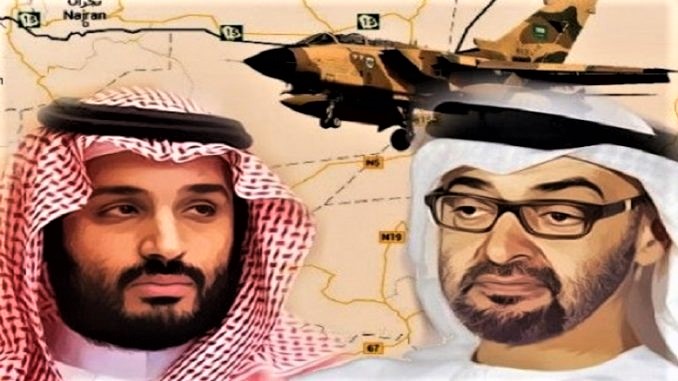 MbS and MbZ were desperate to avoid a reset in US relations, which is why they’re mourning Trump’s defeat in the US presidential election.

Former Vice President Joe Biden will be sworn in as the 46th President of the United States on January 20, 2021 after surpassing the required 270 Electoral College votes in the 2020 US presidential election, thus making Donald Trump a one-term occupant of the White House.

During the weekend following election day on November 3, world leaders called and tweeted their congratulations and well wishes to President-elect Biden. Anne Hidalgo, the Mayor of Paris, France captured the mood in most parts of the world by tweeting, “Welcome back, America,” and the German Foreign Minister Heiko Maas expressed his country’s eagerness for a “new transatlantic beginning, a new deal.”

Saudi Arabia and the United Arab Emirates were notable for being among the last to join Biden’s victory celebrations.

While the governments of all the United States’ long-standing allies have expressed public support for the continuation of their alliance with the world’s dominant superpower, Saudi Arabia and the United Arab Emirates were notable for being among the last to join Biden’s victory celebrations. The Saudi Crown Prince Mohammed bin Salman (MbS) and Emirate Crown Prince Mohammed bin Zayed (MbZ) remained silent until the early hours of Monday morning, November 9, AEDT.

Their hesitancy is hardly surprising, given no other governments in the world stand to lose as much with the departure of Trump and the arrival of President Biden. Their respective anxieties telegraphed via Saudi owned and controlled English language news media outlets Al Arabiyah and Al Sharq Al Awsat, with both deploying a thinly veiled Islamic slur against the President-elect in running the headline, “The Dogs Return to the House,” featuring images of Biden with Champ, his German Shepard.

Saudi Arabia’s Okaz newspaper offered a far more diplomatic foretelling by contending, “The region is waiting . . . and preparing . . . for what happens after Biden’s victory.” But high profile pro-Saudi/UAE Twitter users were more unswerving, with one comparing COVID-19 with the “Biden 2020,” and others echoing Trump’s bogus claims about a “stolen election.”

Saudi anxieties are rooted in Biden’s promise to “make them pay the price and make them in fact the pariah that they are” for the 2018 murder of Washington Post journalist Jamal Khashoggi at the Saudi consulate in Turkey.

Saudi anxieties are rooted in Biden’s promise to “make them pay the price and make them in fact the pariah that they are.”

More recently, and with a measurably and increasingly anti-Saudi/UAE caucus behind him in the Democratic Party-controlled House of Representatives in Congress, Biden has promised to put an end to the unfettered access Arab Gulf governments have had to the US government and weapons industry under Trump and previous White House administrations. He even hinted he will sign an executive order to end US involvement in the Saudi-UAE-led war in Yemen as one of his first acts in the Oval Office.

“Under [the] Biden-Harris administration, we will reassess our relationship with the [Saudi Arabian] Kingdom, end US support for Saudi Arabia’s war in Yemen, and make sure America does not check its values at the door to sell arms or buy oil,” reads a statement on the Biden campaign website.

Without US logistic and aerial support, Saudi and UAE warplanes are effectively inoperable and unable to identify or hit targets, but more importantly their mission would be diplomatically untenable without the moral support of the US government. Moreover, Biden has given every clue he intends to atone for the Obama administration’s decision to green light Riyadh and Abu Dhabi’s war of choice in the first place, particularly because dozens of former and current government officials have expressed fears they could be prosecuted for war crimes over the sale of arms to Saudi Arabia and UAE.

“If I were in the State Department, I would be freaking out about my potential for liability,” Oona Hathaway, a Yale Law School professor and a Defense Department lawyer in the Obama administration, told the New York Times in September. “I think anyone who’s involved in this program should get themselves a lawyer. It’s very dangerous territory the US is in, continuing to provide support given the number of civilians who have been killed.”

None of this has deterred Trump, however, who recently formally notified Congress of a massive arms transfer to the UAE, including 50 F-35 fighter jets, 18 MQ-9 Reaper drones, and a munitions package valued at US$10 billion, along with thousands of MK 82 dumb bombs, run-of-the-mill guided bombs, and missiles, according to the Washington Post.

Amnesty International warned sales to the UAE could make the US responsible for the further deaths of civilians in Yemen and Libya.

On November 9, Amnesty International warned sales to the UAE could make the US responsible for the further deaths of civilians in Yemen and Libya. It called on the US “to immediately halt transfers of all arms, equipment and military assistance to all parties” involved in the conflicts that have besieged both countries for the past half-dozen years.

But what especially keeps Saudi and UAE rulers awake at night is the fear the Biden administration will resume the Iran denuclearization deal and thus end the crippling sanctions Trump has applied on Tehran, which have given the Arab Gulf and Israel the upper hand in the region’s equivalence of a Cold War-era stand-off.

“I believe that in the first months [of Biden’s presidency], we’ll either see him re-join the deal fully, or what I would call ‘JCPOA-minus,’ meaning lifting sanctions in exchange for suspending some of the Iranian nuclear programs [developed] in the past three years,” former Biden aide Amos Hochstein told Israel’s Channel 12 news on November 8.

Whatever happens after Biden moves into the White House on January 20, the good times Saudi Arabia and the UAE have enjoyed under the Trump administration are over. No longer will their actions at home or abroad be beyond reach of US scrutiny or oversight. Americans have grown tired of providing Arab Gulf regimes with blank check support and even more weary with conflicts in the Middle East.

This is the kind of reset in US relations both MbZ and MbS were desperate to escape, and thus why they’re grieving Trump’s defeat.