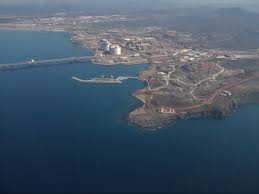 Al-Shabwani, a resident from Ateq city in Shabwa province who requested that only his nickname be used, told MintPress News that he was detained for months and tortured in a secret prison inside Balhaf. Since 2016, when the UAE first entered Yemen’s most productive oil and gas areas in Shabwa, Abu Dhabi has carved out Balhaf as its personal fiefdom and turned the former gas facility into a military camp and secret prison. “Balhaf should be a lifeline for us in this difficult time, not a military camp and secret prison,” al-Shabwani said. “It’s time to kick the UAE forces and their mercenaries out.”

Shabwa province is located in the center of Yemen’s southern coastline and, out of all the country’s provinces, served as a beacon of hope to all Yemenis for a better life, given its wealth of natural gas and geographical location. Today, the major gas and oil facilities in the province instead represent the theft of an entire people’s future. A case in point is Balhaf, a Yemeni industrial port town and the largest investment project in the country, thanks to its export of liquefied natural gas.

For six years, the UAE has not only prevented Yemenis from exporting their own natural gas from Balhaf and forcefully laid off hundreds of employees, it has converted the sprawling industrial complex into a private military camp and secret prison. “The UAE has turned Balhaf from an industrial facility to a military camp,” Mohammed Bin Adyo – Shabwa’s provincial governor, appointed by the Saudi-backed government – complained, adding that Abu Dhabi has prevented Yemenis from using the vital economic lifeline.

In recent weeks, protests organized by local residents, activists, and former employees of the facility took place in the province calling for the UAE to leave Balhaf. “Balhaf should be reopened and gas exports should be resumed; in this case, the whole of Yemen would benefit,” one protester said. However, the city’s de facto authorities are divided between opponents and supporters of the UAE, and leaders of the Saudi-backed Yemeni government have been silent on the issue.

Balhaf, which is located at the eastern end of Shabwa province in the Burum Coastal Area, was once an economic lifeline for the country. It is also home to the Yemen LNG (Liquified Natural Gas) terminal, which used gas from Marib’s Block 18 as feedstock for the 6.7 million t/yr liquefaction facility. Initially, Balhaf was built to export Shabwani oil from the small deposits discovered in the northern Jardan district’s Block 4 in 1987. The port was then developed in the wake of the discovery of major gas reserves in Marib’s Block 18 to receive the gas through pipelines. The first shipment of LNG left Balhaf port in November 2009. Today, Balhaf’s facilities are operated by a consortium of firms led by French multinational TotalEnergies SE.

Before the war, the annual revenue of Balhaf exceeded $4 billion; the financial returns were invested in Yemen’s infrastructure. Now, Yemenis are eager to expel the UAE and see the port once again exporting gas to help jumpstart the economy, or at least as a means to keep the value of the Yemeni Riyal from tanking. Yemen’s currency has sunk to historic lows in recent days and the humanitarian crisis in the country remains the worst in the world. An estimated 80% of the population – 24 million people – require some form of humanitarian or protective assistance, including 14.3 million who are in acute need, according to the United Nations.

Perhaps feeling the pressure of increasing calls to leave Balhaf, the UAE reinforced its presence at the facility over the weekend, setting up additional checkpoints, despite local opposition, in a move that confirms that the rich Emirati Kingdom has no intention of returning the facility to Yemenis. On Sunday, the UAE mobilized more than a thousand members of the southern Shabwani Elite Forces (SEF) to oil facilities in Balhaf. Numerous checkpoints along the roads to the city have been set up by forces of UAE-backed militants, according to witnesses.

In addition to suppressing its opponents by force, and buying others off, the UAE has launched a campaign to demonize locals who oppose its presence, claiming that protesters belong to Houthis and that government officials opposed to the UAE presence in the region are an extension of the Muslim Brotherhood-affiliated al-Islah Party. The UAE has even gone so far as to stoke decades-old regional tensions by claiming northern Yemeni tribes are attempting to oust the UAE in order to occupy the South. Some residents fear that UAE policies could not only rupture the social fabric of the region, but could eventually lead to violent clashes. The Balhaf issue has already become a flashpoint in tensions between pro-Saudi militants in the region and the UAE. Both sides seem ready to risk further violence in order to secure access to Balhaf`s bounties.

Local fears are justified by the reality on the ground. It is believed that up to 65% of Yemen’s oil and gas produced since 2015, when the war began, has been looted by the UAE and Saudi Arabia with the aid of international oil companies, including that refined and transferred through Balhaf port.

Adding to the anger of local residents, Balhaf has been turned into a secret prison by the UAE. There, dozens of their relatives are held incommunicado and tortured, and some killed or disappeared forever, according to their families and former detainees, as well as the United Nations. Witness testimony suggests that the site is still being used to detain and torture prisoners, sources told MintPress.

Officials in Balhaf who spoke to MintPress accuse French authorities of participating in the UAE’s efforts, saying that Abu Dhabi would not dare to occupy a facility in which a major French multinational has a major stake and turn it into a secret prison without the approval of Paris. Others claim that the facility is being used to smuggle stolen gas to Europe, with French participation through Total Energies. Yemeni political analysts told MintPress that the UAE obtained guarantees from France that its interests in Yemen would be protected, including ignoring the Balhaf issue, during the negotiation of a multi-billion-dollar arms deal signed by the two sides on December 3 of this year.