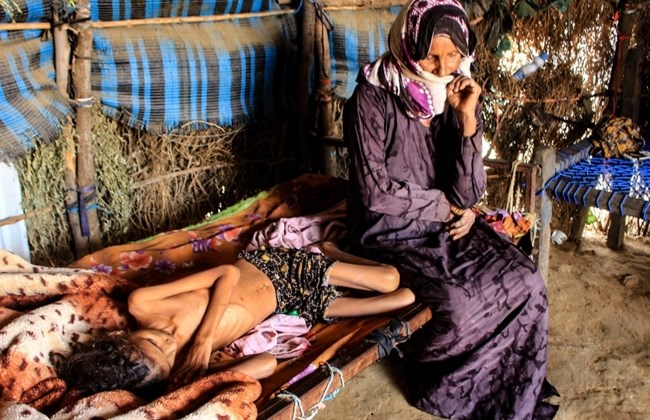 Yemen’s Iran-backed Huthis rebels have resumed an offensive to seize strategic oil-rich Marib, the government’s last northern stronghold, the loss of which would be disastrous for the beleaguered leadership.

“Dozens of people have been killed and wounded on both sides,” a government source told AFP, reporting a Huthi missile fired into Marib’s suburbs and air strikes from the Saudi-backed military coalition pounding rebel positions.

“Most of the deaths were Huthis hit by air strikes,” he added.

Yemen is engulfed in a bloody power struggle that erupted in 2014 between its government, supported by Saudi Arabia, and Iran-backed Huthi rebels, who control the capital Sanaa and most of the north.

The grinding conflict has claimed tens of thousands of lives and displaced millions, according to international organisations, with close to 80 percent of the 29-million population in need of some form of aid for survival.

The upsurge in violence comes as Washington said it would remove the Huthi rebels from its list of terrorist groups next Tuesday, overturning sanctions put in place by the administration of ex-president Donald Trump.

The sanctions had sparked an outcry from aid groups, who said the designation would put them at legal risk and severely hamper efforts.

“The revocations are intended to ensure that relevant US policies do not impede assistance to those already suffering what has been called the world’s worst humanitarian crisis,” US Secretary of State Antony Blinken said Friday.

“The United States remains clear-eyed about Ansar Allah’s malign actions and aggression,” Blinken added, referring to the Huthi movement by its formal name.

While the US reset is aimed at restarting the peace process, Blinken said that sanctions on individual Huthi leaders would remain in place.

Blinken’s statement came hours after UN agencies warned that 400,000 children under the age of five are in danger of dying of acute malnutrition in 2021, an increase of 22 percent over 2020.

“These numbers are yet another cry for help from Yemen, where each malnourished child also means a family struggling to survive,” World Food Programme chief David Beasley said in a joint statement.

“The crisis in Yemen is a toxic mix of conflict, economic collapse and a severe shortage of funding to provide the life-saving help that’s desperately needed,” Beasley added.

The UN agencies warned that about 1.2 million pregnant or breastfeeding women are also expected to suffer from extreme malnutrition in 2021.

“More children will die with every day that passes without action,” said Henrietta Fore, head of the United Nations children’s agency UNICEF.

“Humanitarian organisations need urgent predictable resources and unhindered access to communities on the ground to be able to save lives.”

On Thursday night, Huthi fighters fired a missile into the suburbs of Marib “killing eight soldiers and wounding many others”, the government source said.

Marib lies some 120 kilometres (75 miles) east of the capital Sanaa, which the Huthis have held — along with much of the north — since 2014.

This month the rebels launched a new push for Marib, and also escalated attacks against Saudi Arabia, drawing condemnation from the international community.

Yahya Sarie, spokesman for the Huthis’ armed wing, claimed responsibility for the most recent attack, with drones and missiles fired Thursday at the southern Saudi garrison town of Khamis Mushait, a key airbase.

That attack was intercepted before it reached its target.