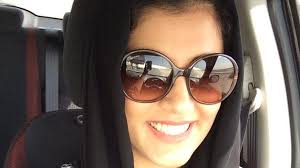 Hathloul rose to prominence in 2013 when she began publicly campaigning for women’s right to drive in Saudi Arabia.

DECEMBER 28, 2020 14:39
Bahraini woman Eman Mohammed takes a selfie with her phone as she celebrates with Saudi and Bahraini women the lifting of the driving ban on women, in east Saudi Arabia, June 24, 2018.
(photo credit: HAMAD I MOHAMMED / REUTERS)

Prominent Saudi women’s rights activist Loujain al-Hathloul, 31, was convicted by a Saudi court on Monday on charges which include seeking to change the Saudi political system and harming national security. Here are some details about al-Hathloul, who has been detained since 2018.

* Hathloul rose to prominence in 2013 when she began publicly campaigning for women’s right to drive in Saudi Arabia.
She was arrested for the first time in 2014 while attempting to drive across the border from the United Arab Emirates – where she had a valid driver’s license – to Saudi Arabia. She spent 73 days in a women’s detention facility, an experience she later said helped shape her campaigning against the kingdom’s male guardianship system.
* In 2016, a year after she became one of the first women to stand for municipal election in Saudi Arabia, she was among 14,000 signatories on a petition to King Salman calling for an end to the guardianship system.
* In 2018, she attended a public meeting in Geneva to brief the Committee on the Elimination of Discrimination against Women (CEDAW) on women’s rights in Saudi Arabia.
DETENTION
* In March 2018 Hathloul was arrested in the UAE where she was studying and forcibly flown to Riyadh where she was held under house arrest before being moved to prison in May, rights groups say. She was among at least a dozen other women’s rights activists arrested, and Saudi media tarred them as traitors.
* Rights groups say at least three of the women, including Hathloul, were held in solitary confinement for months and subjected to abuse including electric shocks, flogging and sexual assault. Saudi authorities have denied torture allegations.
* In August 2019, Hathloul’s family said she had rejected a proposal to secure her release from prison in exchange for a video statement denying reports she was tortured in custody.
* Hathloul went on hunger strike in October – her second in 2020 – to protest against the conditions of her detention. Her family said she was forced to abandon the hunger strike after two weeks because her jailers were waking her every two hours.

* Last month, her case was transferred from regular criminal court to a special terrorism court.