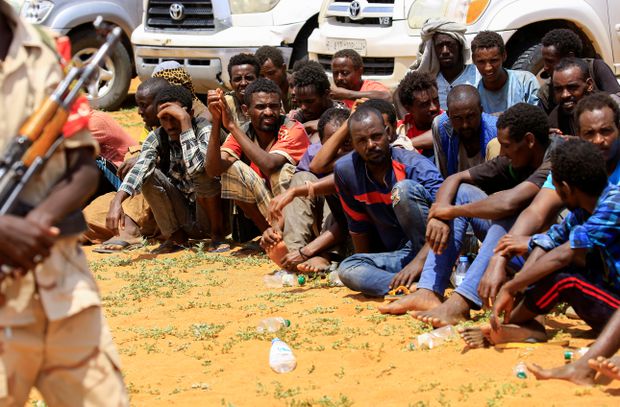 Monique Villa is a journalist based in London. She is a former CEO of the Thomson Reuters Foundation. In 2015, she received the Champions for Change Award for her vision and effort in the fight against human trafficking and modern-day slavery. She is the author of Slaves Among Us: The Hidden World of Human Trafficking, from which this essay is adapted.

Never in human history have there been so many slaves. Estimates vary, but there could be more than a hundred million adults and children enslaved across the world today. It is a vast, hidden, perpetually evolving horror, and it is a difficult issue on which to gather definitive data.

In 2017, statistics from the International Labour Organization (ILO) and the Walk Free Foundation put the number of slaves at 40.3 million worldwide. If slavery were a country or state, it would have the population of Algeria or California. This figure of 40.3 million is based on available data, but most experts agree that the number is actually far higher. Unfortunately, in the absence of better information, it is the best we have and is at least closer to the truth than the ILO’s previous estimate of 20.9 million. But the lack of accurate data is a real and continuing challenge when it comes to tackling the problem.

The best specialists estimate that 30 per cent of slaves are trafficked for sex and 70 per cent are in forced labour, although of course the ratio varies from country to country. So far, forced labour remains even less visible than sex trafficking, which has in recent years received media and government attention. Prosecutors are increasingly pursuing sex-trafficking cases in some countries, whereas they have a much harder time bringing forced-labour cases to court.

A big part of the problem is that people simply don’t understand forced labour – that it exists in the supply chains of many of the brands we buy and in service industries such as car washes, nail salons and hotels in every country. Prosecutors have to prove that traffickers have used fraud, coercion or the threat of violence to induce someone to work and that they are not paying the person more than subsistence-level wages.

This is why prosecutors often find it easier to pursue traffickers for money laundering or tax fraud than for trafficking. As the penalties are more or less the same, they go for the easier offence to prosecute. The problem is that this approach doesn’t help collect reliable data.

Getting the figures right is crucial – so that governments, corporations, the media and the general public understand the true scope of this horror and where and how to combat it. Accurate data would also allow us to determine if we are making progress – or if things are getting worse.

Unfortunately, slavery can flourish easily because circumstances favour the exploiters and work against the victims. Slavery is an invisible and silent crime.

Traffickers are masters at taking you when you are at your most vulnerable. Take the story of Marcela Loaiza, a Colombian woman who was trafficked to Japan, where she was forced into sex work:

“I was 21 years old and had been a single mother since I was 16,” she told me. “My daughter was born with health problems. One day, a man approached me and offered me a job. He said he was a manager and he could make me famous. I said I didn’t need a job.

“Several months later, my daughter got sick with an asthma attack that took her to the hospital. She had to stay for two weeks, and I stayed with her day and night. So I lost both my jobs.

“Unfortunately, I had kept the card from the guy, and I called him. When we met, he asked me why I had changed my mind and I told him about my daughter, losing my jobs, the hospital bill. He asked how much I owed, and when I said $500, he gave it to me immediately. No one else had helped me so willingly and quickly. I thought he was an angel.

“In less than a week, he found me a job, processed the documents, helped with my passport. And he gave me some advice: ‘Don’t tell your family, don’t tell your mother because maybe she will say no and stop your dream.’”

If they are fortunate enough to escape the hell of slavery, survivors risk finding themselves in another kind of hell. After years of abuse, they have lost their dignity, their self-respect and their ability to trust anybody. They are incredibly vulnerable, and the risk is that they will soon be re-trafficked if they don’t receive adequate help. Starting a new life beyond slavery is challenging, even if the enslavement has been for a relatively short period. Many survivors can only start to find comfort when they spend time with other former slaves. These are the people they can relate to and begin to trust.

The road to full freedom is a very long and painful one, and much psychological work is required to try to rebuild so many shattered souls. Unfortunately, there are not many psychologists around the world who understand the very particular needs of survivors. Those who do have experience treating human-trafficking victims explain that survivors continue to be vulnerable to exactly the same things that have happened to them before.

Cornelius Katona, a psychiatrist at the Helen Bamber Foundation in London who specializes in survivors coming from Eastern Europe, explains that “just as for domestic violence, they feel that what has happened is what they deserved or is inevitable. So they lose their self-esteem, their self-worth. They lose the ability to forgive themselves, to feel compassionate about themselves. They have to learn compassion, and we do that in group therapy. If other people show you compassion, it becomes a little easier to have compassion for yourself and feel less guilty.”

Kailash Satyarthi, the Peace Nobel Prize laureate who has saved thousands of children from slavery in India and runs two ashrams where he looks after survivors, told me once that two children he had recently rescued were unable to interact with the other kids. They would sit at the edge of the group in silence, even after being there for two weeks. One of them eventually asked another child, “Why are these people so kind to us? Do they want our eyes or our kidneys?” They could simply not imagine the very concept of kindness.

We must help the survivors of slavery. They need therapy, many need addiction treatments, most of them need the education they have been denied and they need lawyers who can fight for their rights and for redress. We need survivors’ networks in every country because slavery is everywhere – in the United States, in Britain, in Canada and France and Italy, as well as in Africa and all over Asia.

But survivors are not victims. In my view, they are among the strongest of human beings: They have survived hell on Earth and the abuse of those who have enslaved them, yet they have found the mental energy to resist and escape. Survivors are incredibly resilient and adaptable, qualities that can help them rebuild their lives.

The profits made through slavery are gigantic. The ILO puts the annual figure at US$150-billion, but many specialists think it’s probably closer to US$1-trillion. It’s an incredibly profitable business model, with very few risks attached. Slaveholders can discard their slaves and find new ones when their existing “commodities” become too ill or exhausted to yield further profits, because the price of a slave is so low today. The average price is US$90, whereas the cost of a slave in the United States in the 19th century was the equivalent of US$40,000 today, according to historians.

This is organized crime at its most successful, driven by almost total impunity because prosecutions are so rare. In 2016, only 9,071 convictions for human trafficking were recorded worldwide. Low risks, high returns – the perfect recipe for a flourishing business.

Slavery has existed since the beginning of human history, but it is not inevitable or inescapable. If we take collective action, we will change the course of history and bring it to an end

First appeared in  The Globe and Mail