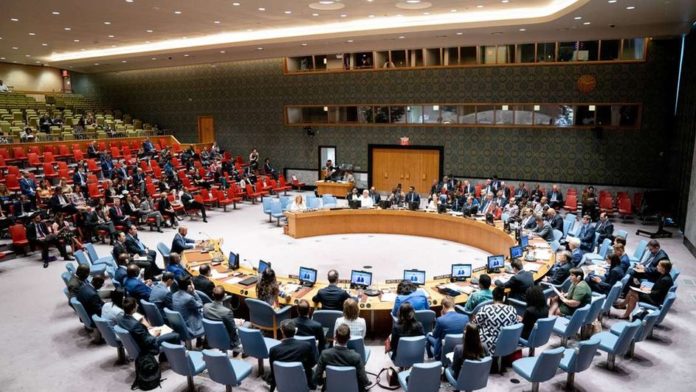 •  Sources say the video conference was called by the US on behalf of Egypt, according to the sources.

The United Nations Security Council plans to meet Monday to discuss Egypt and Sudan’s objections to Ethiopia’s construction of a mega-dam on the Nile River, diplomatic sources said Thursday.

The public video conference was called by the United States on behalf of Egypt, according to the sources.

Ethiopia wants to start filling the reservoir for the 475-foot (145-meter) Grand Ethiopian Renaissance Dam in July, with or without approval from the two other countries.

Egypt sees the structure as an “existential” threat and Sudan on Thursday warned of “great risk” to millions of human lives if the dam plan moves forward.

UN Secretary-General Antonio Guterres said Thursday he would meet with the prime minister of Sudan shortly.

“The only way out in a situation like this is through dialogue among the parties and we are entirely at the disposal of the parties,” he said.

“We urge Egypt, we urge Ethiopia and Sudan to work together to intensify efforts to peacefully resolve outstanding differences,” UN spokesman Stephane Dujarric said then.

Dujarric reminded the parties of “the importance of the 2015 Declaration of Principles on the dam” that stressed the need for cooperation based on good faith, international law and mutual benefit.

Ethiopia says the dam is essential to its development, while Sudan and Egypt fear it could restrict their citizens’ water access.

On Wednesday, Sudan, warned that the lives of millions of people will be endangered should Ethiopia go ahead with its plan to fill GERD before an agreement has been reached.

Khartoum has sent a letter to UN Security Council after talks with Ethiopia and Egypt failed to reach a deal. The virtual meetings were conducted in presence of observers from the US, South Africa and the European Union.

Ethiopia’s progress would “compromise the safety of Sudan’s Roseires Dam and thus subject millions of people living downstream to great risk”, Sudan’s Water Ministry said in a statement on Thursday.

The Nile—which flows some 3,700 miles (6,000 kilometers) as one of the longest rivers in the world—is an essential source of water and electricity for dozens of countries in East Africa. Egypt fulfills 97 percent of its water needs from the river alone.