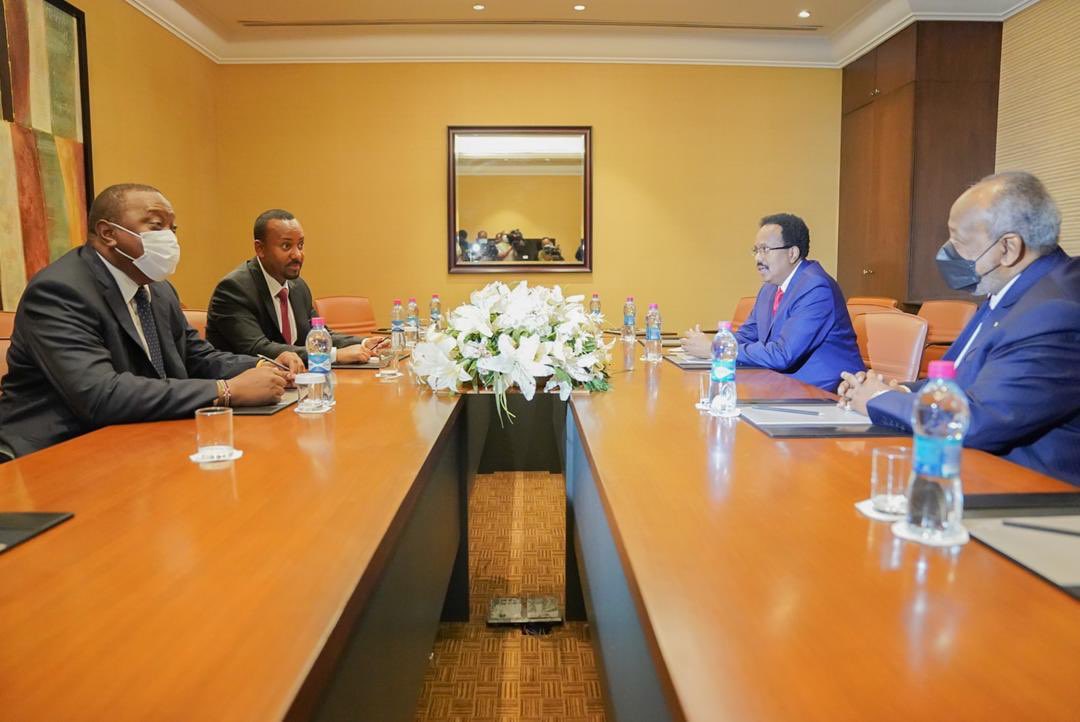 As Uhuru Kenyatta and his Somalian opposite number Mohamed Abdullahi Mohamed Farmajo position their armies on either side of their common border, American, British and European diplomats are trying to persuade the Kenyan head of state to engage in talks. With just a few weeks to go to the presidential elections in Somalia, the situation is explosive- Africa intelligence

President Uhuru Kenyatta flew to the Intergovernmental Authority on Development leaders’ meeting in Djibouti on Sunday with hopes of solving regional troubles that are pulling them back amid COVID-19 pandemic.

Among the issues the leaders will discuss will be Ethiopia internal conflict, border conflict between Ethiopia and Sudan and Kenya’s diplomatic spat with Somalia.

Uhuru is among those who arrived in Djibouti on Sunday ahead of the scheduled meeting.

IGAD is a body comprising seven countries in the Horn of Africa.

The regional organisation based in Djibouti supports its member states in their manifold development efforts, especially in the areas of peace processes and food security.

Already the Covid-19 pandemic has battered the member states and the conflict is now worsening the situation in the countries.

Somalia had last week written a letter to the regional authority asking  to look into the conflict between Kenya and Somalia. Somalia accused Kenya of meddling it’s internal affairs. Kenya denies the claim.

A statement from the Somalia Ministry of Foreign affairs revealed Hamdock had called the meeting in an attempt to strike consensus between the two neighbours.

Last year, Kenya recalled its ambassador after Somalia decided to auction off oil and gas exploration blocks at the centre of a maritime territorial dispute.

The matter is before the International court of justice (ICJ).

On Saturday, Somalia claimed Kenya is arming militias to attack their federal officials in their country.

“The federal government has learnt the government of Kenya has armed and deployed militias in Mandera with the intent to attack Beled Hawo and Somalia National Army bases located in Somalia,” reads a section of the statement from the Somalia Ministry of information.