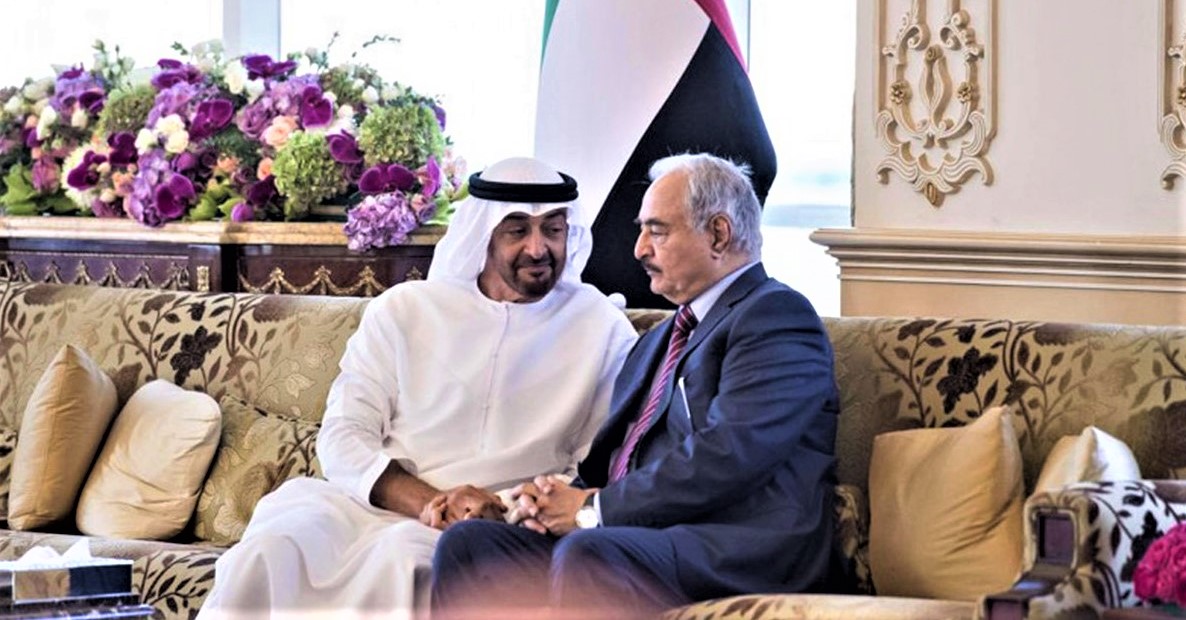 The UAE dupes Sudanese workers into fighting and dying for the most violent warlord in Africa: ex-General Khalifa Haftar.

During the past year, several bombshell reports have revealed the extent to which the United Arab Emirates (UAE) has come to rely on foreign mercenaries to carry out its foreign policy objectives, including political assassinations and terrorist attacks in the Middle East.  This conclusion was shared by the International Institute for Rights and Development and the Rights Radar Foundation at the 45th Session of the Human Rights Council in Geneva earlier this year.

Members of the Human Rights Council not only heard how the UAE has hired more than 30,000 mercenaries from four Latin American countries alone, with at least 450 of them deployed to Yemen after being trained by former or retired US military personnel, but also how these guns-for-hire have carried out high-profile assassinations of dozens of politicians and political figures in Yemen during the past five years.

An ongoing United Nations investigation is also looking into the way UAE-based corporations have hired and deployed American, Australian, and European mercenaries to assist the warlord and war criminal ex-General Khalifa Haftar in his efforts to overthrow the UN recognized government in Tripoli, Libya, which not only constitutes a violation of international law but also of the standing international arms embargo against the African country.

The UAE is hiring private armies to carry out its dastardly deeds across the Middle East to put space between the direct commands of MbZ and the criminality carried out in his name.

Essentially, the UAE is hiring private armies to carry out its dastardly deeds across the Middle East in order to put space between the direct commands of Emirate Crown Prince Mohammed Bin Zayad (MbZ) and the criminality carried out in his name in Libya, Yemen, Somalia, and elsewhere. But now a new Human Rights Watch (HRW) investigation has revealed these crimes are far worse than first realized.

Shockingly, the UAE has set up a private company, namely Black Shield Security Services, to dupe desperate Sudanese workers into protecting oil fields controlled by Haftar’s militias in war torn Libya, a grotesque form of human trafficking by any other name.

According to HRW, the company recruited more than 390 Sudanese men between September and November 2019, all of whom believed they had been hired to work as security guards at malls, buildings, hotels, and government infrastructure in the UAE, only to have their passports confiscated – a violation of UAE law – before being shuttled to a military compound 200 miles to the east of Abu Dhabi International Airport.

“I only saw my passport again the day they sent me back to Sudan [over five months later],” a recruit named Amer told HRW.

It would also be the last time Amer or the other Sudanese recruits met or saw a representative from the company again. They were now exclusively in the hands of the Emirates Armed Forces, who confiscated their cell phones, issued them military uniforms, and ran them through an arduous eight-week military boot camp, rather than the standard five-day security guard training course they were promised during their recruitment.

“Starting mid-November, they taught us [military] field skills, battle drills, the army crawl, and many other things that had nothing to do with a security guard job,” Amer told HRW. “We trained to use all types of weaponry, the Kalashnikov, machine guns, RPGs, and mortars. We were taught how to disassemble and assemble the weaponry, how to use hand grenades, and how to shoot at targets.”

Ahmed Sewehi, co-founder of the Misrata Psychiatry Department in Libya and outspoken pro-democracy activist, described the UAE’s duping of Sudanese workers as the “worst form of human trafficking in the world, sending people to kill or be killed and against their free will.”

“The UAE government is undisputedly the world’s leading terrorist organization. Their money is used to get poor countries to fight wars on their behalf,” Sewehi told Inside Arabia. “The UAE is the biggest threat to hundreds of millions of people in the Middle East, Africa, and the Mediterranean, much more than ISIS,” he added.

Lawyers for the Sudanese men sent unwittingly to Libya say they are preparing lawsuits to be filed in regional and international courts against ten persons from the UAE, Sudan, and Libya over human trafficking, including MbZ, Khalifa Haftar, and representatives of Black Shield Security Services and a Sudanese airliner.

“We are preparing to take the case to regional and international courts as this crime isn’t confined to borders and doesn’t respect UN, Arab League or African Union’s laws . . .”

“We are preparing to take the case to regional and international courts as this crime isn’t confined to borders and doesn’t respect UN, Arab League or African Union’s laws of fighting human trafficking,” said Mr. Omar al-Abed, one of the lawyers acting on behalf of the plaintiffs.

In a further blow to the UAE, the Turkish based news agency Anadolu announced on December 10 it had obtained leaked documents proving the UAE government’s knowledge and involvement in sending Sudanese mercenaries to Libya at the request of Haftar, pointing to a document in which Sudan’s top military commander – Mohamed Hamdan Dagalo – declared he had 1,200 Sudanese mercenaries ready to deploy to the Jufra military base in central Libya on October 23.

According to Anadolu, a meeting was recently convened between Emirati authorities and Dagalo in Khartoum, where the UAE promised financial and military support to the Sudanese military leader in exchange for two brigades of Sudanese mercenaries.

Videos posted on social media also show Sudanese mercenaries pledging an oath of allegiance to the warlord Haftar in Libya.

The phenomenon does not seem to be limited to Sudan and may be more widespread in Africa than previously known. A former South African Special Forces operator, who has been employed by a number of private military contractors since the US coalition led the occupation of Iraq, told Inside Arabia that he and two other former colleagues were contracted by an Abu Dhabi-based company for a 12-week “security mission” in Libya in 2018—the details of which he would not share out of fear doing so would compromise his identity.

These revelations are made ever more troubling by the fact that the UAE has become one of the world’s biggest recipients of US weapons; a reality underscored by the recent transfer of US$23 billion worth of F-35 fighter jets, MQ Reaper drones, thousands of MK82 dumb bombs, and run-of-the-mill guided bombs and missiles, which will produce only more bloodshed and suffering in the region.

Amnesty International has warned these arms deals with the UAE make the US complicit and a willing participant in UAE perpetrated war crimes, knowing these weapons are being used in violation of international and humanitarian law, with the real likelihood many are falling into the hands of private armies and mercenaries that operate in defiance of international law and norms.

Worse – there’s now the possibility that US weapons and training will make their way to those who have been human trafficked against their will to foreign battlefields, to protect and advance the interests of MbZ and the most violent warlord in Africa – ex-General Khalifa Haftar.

Lost and Found in Guantanamo Bay