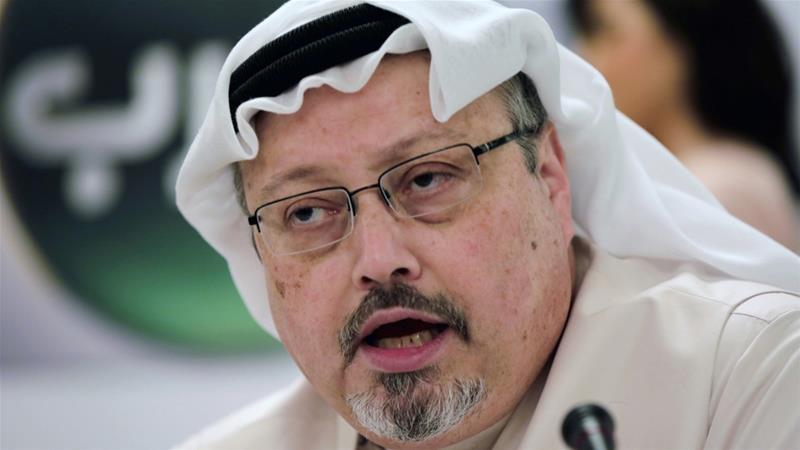 Saudi court verdict over 2018 killing of journalist Jamal Khashoggi is ‘anything but justice’, says UN rapporteur.

Turkey and international rights groups have led condemnation of a Saudi court verdict over the 2018 murder of journalist Jamal Khashoggi, saying it failed to deliver justice.

Five people were sentenced to death on Monday over the brutal killing of the writer by a team of Saudi agents inside the kingdom’s consulate in Istanbul last October, but two top aides to powerful Crown Prince Mohammed bin Salman (MBS) – the de facto Saudi leader – were exonerated.

The Saudi prosecutor’s office said a total of 31 people were investigated in connection with the killing, and that 11 people were charged. Three were handed jail terms totalling 24 years and the rest were acquitted. None of the defendants’ names was immediately released.

“The investigation showed that the killing was not premeditated … The decision was taken at the spur of the moment,” Saudi Deputy Public Prosecutor Shalaan al-Shalaan said, a position contradicting the findings of a United Nations-led investigation.

Ahmed Benchemsi, spokesman for Human Rights Watch, told Al Jazeera that the trial was “all but satisfactory”.

The case was “shrouded in secrecy since the beginning, and it’s still … until now … We do not know the identities of those masked perpetrators, we don’t know the specific charge levelled against who exactly,” Benchemsi said.

“Saudi prosecutors did not even attempt to investigate the upper levels of this crime, and whether they played a role in ordering the killing, including Crown Prince Mohammed bin Salman,” he added.

Khashoggi, a critic of MBS, was living in self-imposed exile in the United States, where he had been granted residency status.

After weeks of repeated denials that it had anything to do with his disappearance, the kingdom eventually acknowledged that its officials were behind the gruesome murder.

Turkish intelligence agencies concluded that he was killed in a premeditated murder, while the CIA has reportedly concluded that MBS likely ordered the killing. But Riyadh has consistently denied that the crown prince was involved.

Here are the reactions to the Saudi verdict:

Turkey described the verdict as “scandalous” and said those responsible for the murder had been granted immunity.

“Those who dispatched a death squad to Istanbul on a private jet … and sought to sweep this murder under the rug have been granted immunity,” President Recep Tayyip Erdogan’s top press aide, Fahrettin Altun, wrote on Twitter.

The foreign ministry said in a statement that the decision “is far from meeting the expectations of both our country and the international community to shed light on the murder with all its dimensions, and deliver justice”.

Ankara said there was no clarity on key aspects of the murder including the whereabouts of Khashoggi’s body, labelling it a “fundamental deficiency” in terms of accountability.

Agnes Callamard, the UN special rapporteur on summary executions, who has previously directly linked MBS to the killing, said the sentence “is anything but justice”.

“Under international human rights law, the killing of Khashoggi was an extrajudicial execution for which the state of Saudi Arabia is responsible,” she wrote on Twitter.

h) The defendants had repeatedly stated they were obeying orders. The prosecutor had publicly stated that Saud al-Qahtani, Crown Prince personal adviser, had demanded the abduction of Jamal Khashoggi (on the grounds he was a threat to national security.) And yet, he remains free

“Bottom line: the hit-men are guilty, sentenced to death. The masterminds not only walk free. They have barely been touched by the investigation and the trial. That is the antithesis of Justice. It is a mockery,” said Callamard, who does not speak for the UN but reports her findings to it.

Paris-based media rights watchdog Reporters Without Borders said that justice was “trampled on” with the death sentences meted out after a trial that did not respect international standards of justice.

The group’s secretary-general Christophe Deloire tweeted that the sentences “can be interpreted as a means to permanently silence the suspects, a way to prevent them from speaking to better cover up the truth”.

“The opacity of the procedure and the concealment of evidence does not allow us to get an idea” of why several others were convicted or acquitted, said Deloire, adding: “We still expect a full accounting.”

Amnesty International criticised the verdict as a “whitewash which brings neither justice nor the truth for Jamal Khashoggi and his loved ones”.

“Given the lack of transparency from the Saudi authorities, and in the absence of an independent judiciary, only an international, independent and impartial investigation can serve justice for Jamal Khashoggi,” said Middle East research director Lynn Maalouf.

“The verdict fails to address the Saudi authorities’ involvement in this devastating crime or clarify the location of Jamal Khashoggi’s remains,” she said in a statement.

The verdict left Khashoggi’s fiancee Hatice Cengiz unsatisfied, with her saying on Twitter that the “Saudi announcement not acceptable”.

The UK’s Foreign Secretary Dominic Raab condemned “the use of the death penalty in all circumstances as a matter of principle”.

“The killing of Jamal Khashoggi was a terrible crime,” Raab said in a statement. “Mr Khashoggi’s family deserve to see justice done for his brutal murder. Saudi Arabia must ensure all of those responsible are held to account and that such an atrocity can never happen again.”

The slain journalist’s son, Salah Khashoggi, said his family had achieved justice, thanks to the verdict of Saudi Arabia’s public prosecutor.

“Today we have been granted justice as the children of the deceased, God willing, Jamal Khashoggi. We affirm our confidence in the Saudi judiciary at all levels, that it has been fair to us and that justice has been achieved,” he said in a Twitter post.

The US also welcomed the sentences, calling the ruling an “important step”.

“Today’s verdicts were an important step in holding those responsible for this terrible crime accountable,” a US Department of State official told reporters after the ruling.

The US “encouraged Saudi Arabia to undertake a fair and transparent judicial process”, the official added.

“We’re pressing them for more transparency and for holding everybody accountable.”

US does have troops in Somalia and Yemen, contrary to Psaki and Sullivan