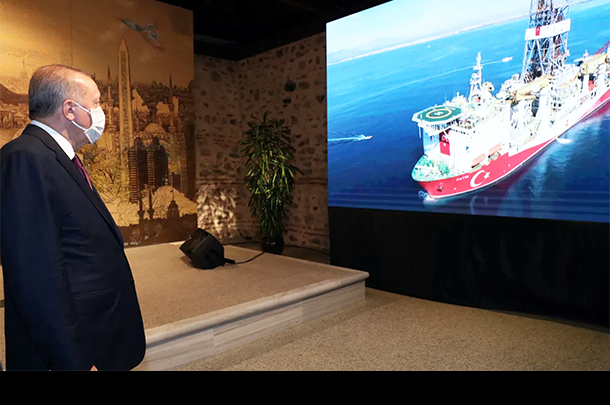 President of Turkey, Recep Tayyip Erdogan speaks on the discovery of a major natural gas reserve off Black Sea coast during a press conference at the Dolmabahce Palace Presidential Work Office in Istanbul, Turkey on August 21, 2020 [TCCB/Murat Çetinmühürdar/Anadolu Agency]

Last Friday, Turkish President Recep Tayyip Erdogan announced in Istanbul that the Fatih drillship discovered 320 billion cubic metres of natural gas in the Black Sea and that Turkey will start using this domestic gas in 2023. This is the same year that the country will celebrate the centennial year of the Republic of Turkey’s foundation.

Turkey depends externally on its oil and natural gas requirements. Last year, the volume of natural gas consumption in the country reached 44.9 billion cubic metres, and 99 per cent of this amount was imported from other countries such as Russia, Iran and Azerbaijan. It is certain that the gas discovered in the Tuna-1 well, after its removal and preparation for public usage, will lead to a decrease in this foreign dependence and will strengthen Ankara’s position in energy deals. Turkey also spends $12 billion annually on importing natural gas, which is a black hole in its current account and raises the country’s need for US dollars. With the use of domestic natural gas, that large hole will gradually disappear, and we will see a surplus in the current account. Additionally, Turkey’s need for hard currency will decrease.

The discovery announced by Erdogan is an essential step towards self-sufficiency in the field of energy. It indicates the possibility of similar findings in the coming days, whether in the Black Sea or the Mediterranean. Turkish research and exploration vessels expect to make new discoveries of natural gas and oil, taking Turkey from being an energy importing country to an exporter country.

The good news announced by the president did not come out of nowhere. Rather, it is the fruit of the relentless efforts made by the Turkish Ministry of Energy and Natural Resources, for some time, to discover oil and natural gas reserves in the “blue homeland”. In 2011, Turkey only possessed the dated Piri Reis seismic ship, but today, it has five large and advanced vessels working in the Black Sea and the Mediterranean. Two for the seismic survey, the Oruc Reis and the RV Barbaros, and three drillships – Fatih, Yavuz and Kanuni. Among these five ships, the Fatih drillship is currently operating in the Black Sea, while the remaining four continue their operations in the Mediterranean.

Turkey owns these five ships, carrying out exploration work with national capabilities, instead of renting ships or signing contracts with foreign companies, therefore reducing the costs of these works and giving Turkey great experience in the field. Retired Admiral Jihad Yaji has noted the importance of owning this fleet, explaining that digging one well in a chartered ship costs $500 million, but the cost of digging one well with a ship owned by Turkey does not exceed $38 million. Turkey may use its ships and its expertise in the near future in joint works with friendly countries, such as Pakistan and Libya, to search and explore the waters of their maritime areas of influence.

The natural gas and oil reserves that Turkey is expected to uncover, similar to its discovery of natural gas in the Black Sea, will certainly contribute to strengthening the Turkish economy, which has made a quantum leap in various fields.

Turkey’s lack of energy resources has been a weak and draining point for the Turkish economy. It is certain that the discovery of natural gas and oil reserves in the Black Sea and the Mediterranean will address this problem. In fact, Turkey’s possession of energy resources will be added to its strengths, and will be a strong factor for the Turkish economy, unless it suffers from “Dutch disease”, which is the phenomenon of declining production in industrial, agriculture and other sectors due to the sudden abundance of natural resources. Dutch disease was given this name due to its emergence in the Netherlands after the discovery of a large natural gas field in 1959.

Turkey is taking confident steps towards shedding the shackles of obedience, and achieving freedom from its restrictions, whether through research and exploration of natural gas and oil resources or through investment in renewable energy projects. Turkey is expected to be among the five largest European producers of renewable energy by 2024. Ankara hopes that sooner or later these various efforts will bear fruit, ending the country’s external dependence for its energy needs.