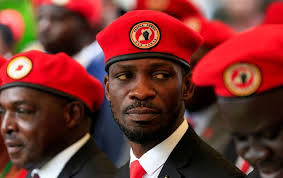 There is a heavy security presence in the Ugandan capital, Kampala, following protests over the arrest of pop star and opposition figure Robert Kyagulanyi, popularly known as Bobi Wine. At least 28 people have died during the protests that erupted across the country, with more than 300 people arrested, the police said.

Bobi Wine was arrested at an election rally in Eastern Uganda after being accused of violating coronavirus prevention guidelines. Authorities said the anti-coronavirus measures are to prevent the spread of the coronavirus, however, critics say the move is only aimed at halting campaigns by the opposition ahead of the January 2021 election.

After two days in police custody, Bobi Wine was arraigned in court and was on Friday granted bail.

When news of his arrest broke this week, protests hit Kampala and some major towns. Scores of young people from Wednesday started setting up roadblocks on some roads while others lit fires. On Thursday, soldiers and the police fired tear gas, live bullets and water cannon to disperse the protesters, Aljazeera reported.

Deputy army spokesperson, Colonel Deo Akiiki, has said that soldiers will be deployed at all major roads to quell the protests, BBC reported. “This is a war-like situation, so the army has to deploy,” army spokeswoman Brigadier Flavia Byekwaso said earlier on Thursday, according to Aljazeera.

On January 14, Ugandans will head to the polls to elect their next president and lawmakers. 76-year-old Yoweri Museveni is seeking a sixth term in office, with his strongest challenger being Bobi Wine.

Bobi Wine was a musician but as he would later admit, he could not just get on with music while the country wasted under a president he has no belief in. Bobi Wine is an independent member of the Ugandan legislature. When he won his seat in 2017, it made national news but many would have written off the fervor for him.

Things changed in 2018 when he campaigned for a number of candidates in by-elections and they won. He also began making himself a nuisance to Museveni’s government. Today, his signature red beret that forms part of his fashion has become a favorite of young people.

The enduring sorrow and pain of British slavery