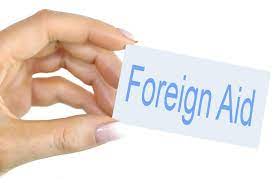 “Our so-called foreign aid program, which is not really foreign aid because it isn’t aid to foreigners but aid to us, is an indispensable factor in carrying out our foreign policy.” (US Secretary of State John Foster Dulles, 1956[i])

Over the last fifty years, rich countries claim that they have given over $2 trillion in aid to poor countries. Despite this, many people in poor countries still live in poverty. This has led to some commentators suggesting that aid is pointless. However, the figure of $2 trillion is misleading. A closer look at government aid reveals that not only is the total spending quite small, but very little of it is genuinely used for development. The poorest people receive very little.[ii] Government aid from Britain and the US actually has other purposes. It is primarily a tool to help governments pursue their foreign policies. It benefits our exporters, it cements relationships with leaders in other countries, and it can be used to persuade other countries to change their economic systems.

The Ultimate Example of Aid Propaganda — The Marshall Plan

After World War 2, the US came up with a system of aid called the Marshall Plan. This was to help re-build Europe and is often used by the mainstream media as an example of America’s generosity. In fact, the primary focus of the Marshall Plan was to help US companies develop markets abroad so they could export more.[iii] At the time, US exporters faced a possible crisis because European countries had no money. The US under-secretary of state for economic affairs justified foreign aid when he wrote in 1947:

“Let us admit right off, we need markets, big markets, in which to buy and sell.”[iv]

Various documents from the time show that US aid was intended to help with US security or ‘geopolitical interests’. In other words, control of resources and trade.[v] Early loans to Europe were for imports from America, particularly oil and food.

These arrangements had serious downsides for some countries that produced goods which competed with American exports. America dominated the global grain trade by 1950 whilst Argentina’s grain trade was reduced by two-thirds.[vi] The whole system had the intended effect of turning other countries into customers of the US.

The Marshall plan also had a second purpose. Some of the Marshall Plan funds were secretly sent to anti-communist groups because the US government wanted to make sure that communist governments did not come to power in Europe after the war.[vii]

Most US citizens believe that their government is one of the most generous, when in fact it is the least generous of all advanced nations. Britain does slightly better but is well behind the leading European nations. In 1970 most advanced nations agreed to pay a certain amount of their annual production (0.7% of their GNP) as aid. Currently, only Norway, Sweden, Denmark and Luxembourg do this.[viii] The total shortfall so far is estimated to be over $3 trillion. This would be enough to pay off all of the developing world’s outstanding debts, whilst simultaneously providing basic healthcare and education for everyone.

The amount of aid given each year by all rich countries in 2019 is $150 billion. This sounds like a lot, but is much smaller than the $1.8 trillion dollars spent on weapons each year, or the hundreds of billions of dollars spent subsidising big corporations. The US spends 25 times as much on its military as on aid. Britain also spends much more on weapons than on aid.[ix] At the same time, huge amounts of wealth are extracted from poor countries by rich ones. Recent calculations show that for every dollar that poor countries receive in aid, $24 dollars flows from poor countries to rich.[x]

Over the years, rich countries have changed what they define as aid. They now include things that were not originally counted. Writing off debt now counts as aid.[xi] Even reconstruction in Iraq and Afghanistan counts as aid. The US has a ‘destroy and rebuild’ aid strategy. First they bomb the schools, hospitals, roads and other infrastructure in a country that they are invading. When they rebuild some of it, they call this aid.[xii] Britain participates in this system.

Approximately a quarter of aid goes on ‘technical assistance’. This is where overpaid consultants from rich countries advise poor countries. In Cambodia $50 million was spent on 700 international consultants. The same money could have paid for thousands of jobs for Cambodians.[xiii] Politicians also now include debt relief as aid. Much of this aid has been described as phantom aid.

A third of US aid is for ‘security’, which means it is spent on weapons and military training, usually provided by US companies.[xiv] This was the case for Britain up until 2014, but UK military aid has been less in recent years (although this is likely to change).[xv]

In earlier studies, researchers found that much US aid went to South American governments that tortured their citizens, such as Columbia.[xvi] These were the same rulers that the US wanted to keep in power because they allowed US corporations to plunder the resources of their countries.

Foreign aid strengthens the commercial and political links between decision-makers in rich countries and decision-makers in the developing world. This then encourages those developing countries to trade with the donor countries. There was a famous example in Britain known as the Pergau Dam scandal in 1991. British aid to build an unnecessary dam in Malaysia turned out to be a bribe to encourage the Malaysian government to buy British weapons and provide work for British construction companies.[xvii] Even the economist magazine noted that:

The people who benefit most from the aid system are the consultants and corporations from rich countries, together with decision-makers in poor countries.

Even food aid is not a simple case of helping those in need. It can be detrimental to local economies. US relief agencies in Somalia in 1992 had been given some funding by the US government. The agencies were told that they had to buy food from the US. This food was then distributed by the agencies in Somalia. The agencies were not allowed to buy from local farmers. At the same time the local farmers were unable to sell anything, as they were unable to compete against free food from the aid agencies. This led to many of them going out of business. The local people were then dependent on the food from the US, as there were no local producers. Over the longer term they had become customers of US food companies. In 1997 the US government agency in charge of aid said:

The charity organization CARE announced in 2007 that it will no longer take food aid from the US government, as the system is motivated by profit, not altruism, and ends up causing hunger, rather than reducing it.[xx]

Much aid comes with conditions attached that are intended to benefit the donors, not the recipients. In many cases, the economic changes have severe consequences for poor people. For example, aid money intended for medicines could be used to provide large quantities of cheap, but effective, medicines. Instead, donors insist that it is spent on expensive, patented medicines that are no more effective. In one of the worst examples, poor countries were paying $15,000 for patent medicines to treat AIDS instead of $350 for generic copies. This creates big profits for Western drug companies. At one point over half of British aid programs were tied to the purchase of British goods[xxi] and more than 70% of US aid goes back to the US. The same is true of many other rich countries. Much aid from Japan and France comes with the condition that it is spent on Japanese or French purchases.

The threat of holding back aid is also used for coercion. For example, US aid to Brazil was conditional upon Brazil strengthening its patent laws. Some aid comes with much broader strings attached. The overall effect is intended to change the economic system within poor countries to benefit Western companies. In 1993, the British Minister for Overseas development stated:

“We use the aid program to support the kind of international economic system which serves our interest.”[xxii]

If we exclude military aid, reconstruction aid to countries that we have destroyed, and other phantom aid, there is not much left. One study of British aid by the UN concluded that only 6% was spent on helping the poor.[xxiii] The economist Jeffrey Sachs calculated that:

“In 2002, the United States gave $3 per person in sub-Saharan Africa. Taking out the parts for US consultants, food and other emergency aid, administrative costs, and debt relief, the aid per person came to the grand total of 6 cents.”[xxiv]

This small proportion of aid is genuinely useful, and the successes of deworming drugs, oral rehydration for diarrheal diseases, and indoor spraying to control malaria, show that a great deal can be achieved with very little money when rich countries are really trying to help the poor. Unfortunately, politicians from donor countries use these examples as propaganda to give a misleading impression about the true nature of aid. The poorest countries should be receiving the most, but they only receive approximately a quarter of all government aid.

Mainstream media coverage of aid is also a good example of successful propaganda. It is assumed without question that aid is intended to help the poor. The true purposes of aid are rarely mentioned. This propaganda plays a deeper role. Rich countries that devote immense resources to stealing from poor countries are able to whitewash reality, and give the impression that they are trying to save the world.

Aid could make a significant contribution to decreasing poverty, if all of it were used well. Coordinated efforts to deal with diseases in poor countries, such as malaria, could make a big difference to the lives of hundreds of millions of people. Unfortunately, as we saw in earlier posts, poor countries send $2trillion/year more to rich countries than they receive.[xxv] Most US and UK policies are intended to extract wealth from poor countries, through tax havens, debt, exploitation, war, and plunder. Leading analysts

“aid resources are…often misdirected. They are increasingly being deployed in ways that exacerbate rather than eradicate poverty.”[xxvi]

This article was first posted at ElephantsinThe Room

The Violence of Colonialism and the Exploitation of Africa. The Myth of Independence