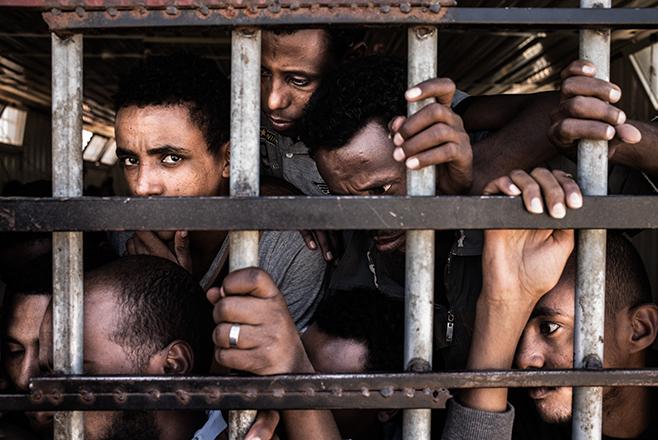 Psychotic breaks, swallowed razor blades, attempted suicides, endless psychiatric medication, undrinkable water, lack of care, sanitary degradation, human contact denied. And then the heat, which is affecting the whole country, but is creating even more suffering in the detention centers, turning cells into hothouses and precooked food into smelly mush. These are some of the impressions from parliamentarians who visited the Holding Centers for Repatriation (CPR) in Caltanissetta, Gradisca d’Isonzo and Milan in recent weeks. They heard individual stories of detained migrants and saw the problems of individual facilities for themselves, but also received an overall picture of the administrative detention system.

Detention in these facilities is something unique among the forms of deprivation of liberty, for two reasons: it is not based on crimes committed or for prevention purposes, and it is entrusted to private operators, on the U.S. model, who pursue their economic interests while they manage the facilities. According to data from the Interior Ministry’s Department for Civil Liberties and Immigration, made available by the National Guarantor, as of June 30, there were 667 men and five women detained in Italy’s ten CPRs. In all of 2021 there had been 5,147. Of the latter, 49% have been deported.

“The situation is dramatic. The heat in this part of Sicily is devastating, and there is not even a tree at the facility, a place to get some shade. There is no TV, no opportunity to distract oneself, to read a book,” says Simona Suriano, a deputy from the Manifesta group. On Thursday she visited the CPR in Pian del Lago, Caltanissetta province, while a solidarity sit-in with the inmates organized by Lasciatecientrare and other associations was being held outside.

“In recent days, there have been protests. I saw people with bandaged limbs. N., 25 years old, cried the whole time. He said he had been beaten. Law enforcement denies it, but I will question Minister Lamorgese,” she continued.

At the other end of Italy, a thousand kilometers to the northeast, there is the CPR in Gradisca d’Isonzo. It reopened in January 2020, and since that time three people have died there: Vakhtang Enukidze, Orgest Turia and Anani Ezzeddine. Senator Paola Nugnes (Mixed group) and Deputy Doriana Sarli (Manifesta) conducted an inspection on June 17.

“People are locked in cages of six each. They never go out. The windows are blocked by Plexiglas panels that create absurd levels of heat. This situation crosses all limits,” says Nugnes. The inspection lasted eight hours. There was no doctor present, only a nurse, who – according to the managing company, the Ekene cooperative that also runs the Macomer CPR – stays on the premises for two to three days at a time, with continuous shifts.

The parliamentarians found many non-compliances with the tender requirements: “From the Interior ministry to the Prefecture, from the police headquarters to the law enforcement officers present, there is a chain of command that should become aware of the situation. That things are not up to standard is not an opinion, this is obvious to the naked eye,” Nugnes denounces. “Ekene is called a nonprofit organization but it follows the profit model: the less it offers, the more money it makes,” Sarli argues.

“A diabetic gentleman was vomiting blood. He was not receiving treatment and had stopped eating for fear of his blood sugar rising. Another guy doesn’t talk to anyone, is unapproachable, but screams all night: how can a psychiatric patient in such a deep psychotic state be kept there?” the MP continues. The MPs are preparing a complaint to the prosecutor’s office and a report to the National Guarantor.

The CPR in Via Corelli in Milan was visited on May 29 by Senator Gregorio De Falco (Mixed group) and infectious disease specialist Dr. Nicola Cocco, an expert in prison medicine. Compared to the previous inspection in June 2021, the managing company has changed, from Engel Italia to Martinina (moreover, it’s not very clear how the change took place), but the problems previously denounced in the report Delle pene senza delitti (Regarding Punishments Without Crimes) have remained. These include: the lack of specialist medical visits, absence of medicines, poor food, and limitation of the right to defense. One striking detail: the inspection could not ascertain whether or not the facility’s water was actually drinkable, as a sign on the infirmary sink suggests. The center’s director did not have any certification that the water was drinkable, nor could he produce any later on.

Among the people the delegation met with were three young men who ended up behind bars after seeking asylum at the police headquarters, a man who has a wife and six children and has lived in Italy since 1993, and two others who have lived there for 22 years. The story of D. D., a 28-year-old Egyptian, speaks volumes. The young man finished serving a prison term in the Trento jail on May 18. Released from prison for good behavior, he was not freed but taken without notice to the CPR in Milan. There, he did not receive treatment for the disease from which he suffers, epilepsy, and in 48 hours he had two violent seizures. One caused him to injure his face.

In prison, D. D. had obtained his A2 Italian certification and passed the third grade of adult education. He had also studied all year for an exam he was supposed to take as he left prison. On the date of the test, however, he realized that the CPR would not transport him to Rovereto to take it. He attempted to kill himself. The case was resolved only through the intervention of the National Guarantor, four days before De Falco’s inspection: D. D. was released, passed the exam and was reunited with his wife and child. But he remains undocumented and could end up back in the CPR at any time.

Nugnes, Sarli, Suriano and De Falco all agree that administrative detention must be eliminated. The problems lie not only with the individual facilities, but with a system that takes freedom away from those who have not committed crimes. It is the latest piece in the larger mosaic of anti-migrant policies that have created concentration camps in Libya, turned the Mediterranean into a graveyard and brought borders all the way into cities, around the individual bodies of “irregulars.” In a preview of the report edited by De Falco, with the help of the No to CPR network and the Naga association, we read: the CPRs are “the final puzzle piece of a project of institutional racism, of constant rejection and refusal, which aims to punish a mere administrative offense with the deprivation of individual freedom.”