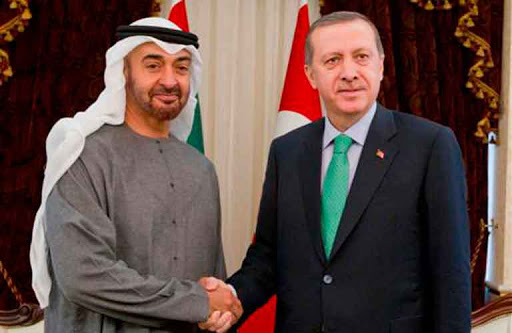 WHEN the UAE-Israel deal was annou­n­ced, the two Middle Eastern countries that most vociferously condemned it were Turkey and Iran. While Iran’s position is consistent with its policies, and informed by the already intense tension between it and the Arab states and Israel, Turkey’s anger at the UAE requires closer analysis, as it is a factor of the growing, and relatively under-reported reg­io­­nal rivalry between Turkey and the UAE.

This may seem like an odd match-up but increasingly, this rivalry is becoming a defining feature of Middle Eastern politics and beyond. It isn’t exactly a recent phenomenon either, and is tied to the competing visions the two countries have for the region. For the UAE, any hint of democracy in the Middle East is anathema as, in their view, it will first propel the Muslim Brotherhood into power and — even if it doesn’t — will weaken the autocratic hold of the Gulf monarchies.

Turkey, despite the authoritarian leanings and nationalist policies of President Erdogan, remains a democracy and at least ideologically has a degree of sympathy for the Muslim Brotherhood. And so, in the 2000s we saw that while Ankara warmed to the Brotherhood and allied causes, the UAE conducted purges against the movement’s members and suspected sympathisers, removing them from positions in the state and educational institutions. This culminated in a major crackdown on the MB by the UAE in late 2011 and in 2014, the MB was declared a terrorist organisation.

But before this had come the ‘Arab Spring’, which sent the Gulf monarchies into panic mode as they saw an existential threat to their rule emerge. Turkey, on the other hand, saw it as something of a godsend and acted accordingly, extending moral support to the protesters.

The UAE and Turkey are confronting each other in a variety of theatres.

When elections took place in Egypt and Mohamed Morsi took power, it seemed for a moment that things were going Turkey’s way. It didn’t last, of course, and the reaction of the two countries to the Sisi coup was predictable: Turkey condemned it and the UAE welcomed it, shoring up the new regime with large amounts of cash and diplomatic support.

In the aftermath of the attempted coup in Turkey in 2016, suspicions grew in Ankara that the UAE — which showed thinly veiled delight at the coup — had in fact supported the putschists. Along with hints from Erdogan himself, Turkish media ran with stories alleging that the UAE had spent as much as $3 billion in the effort which it said was in line with the kingdom’s support for reactionary elements in Egypt and Sudan.

It has only gotten worse since then, and today we see the UAE and Turkey confront each other in a variety of theatres as the former tries to stymie Turkish plans at every opportunity. Take Syria: Ankara is bitterly opposed to the Assad regime and supported not only the initial anti-government protests but later also the rebel movements against Assad. In contrast, the UAE was more sympathetic to the Assad regime and has allegedly funded the Kurdish PKK — considered a terrorist organisation by Turkey, the US and the EU —in an apparent effort to strengthen it against Turkey.

Along with offering words of support for the largely Kurdish YPG, the UAE also label­led the Turkish 2019 offensive across the Syrian border (aimed at curtailing the activities of the YPG) as “a threat to peace”, sparking another diplomatic war of words. Significantly, Turkey sided with Qatar when its relations with Saudi Arabia and the UAE soured, sending relief goods and stationing 5,000 Turkish troops in the beleaguered state.

The latest theatre of this expanding conflict is Libya, where the UAE has opened its considerable coffers in support of Khalifa Haftar, the heavily medalled general wh­­ose Lebanese Natio­­nal Army’s mon­ths-long offensive on Tri­­­poli recently end­ed in defeat despite all-out support by the Gulf states, Egypt and France. Accord­ing to a UN report, the UAE conducted dozens of secret flights to Haftar-controlled airbases supplying him with cutting-edge weapons. Here we see Tur­key again on the opposite side, supporting the UN-recog­­nised Government of National Accord.

It’s not just about ‘flipping’ countries into your camp to act as ideological allies, because for Turkey a friendly Libya offers further ing­­ress into the Mediterranean. And if Tur­key wants something, you can bet the UAE will try to prevent it, and so in the latest tensions between Turkey and Greece in the eastern Mediterranean we see the UAE predictably throwing its full support to Greece, even sending four F-16s to Crete for joint training with the Greek military. The stakes are high for Turkey here, as it drills for much-needed gas and energy supplies but faces increasing opposition from European powers, notably France, aiming to curtail its interests and ex­­pand their own, making them ready allies for the UAE. Turkey, on the other hand, has fewer regional allies and will have to modulate its strategic policy very carefully in the coming decade.

The writer is a journalist.