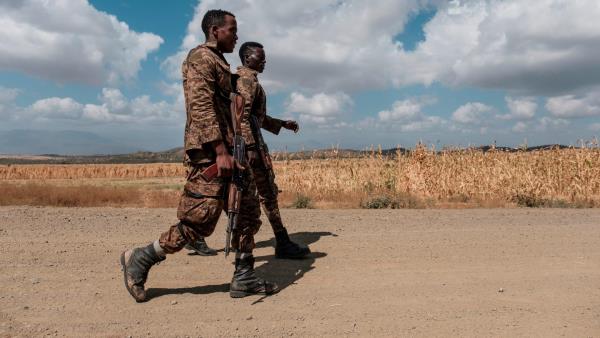 Sudanese authorities Thursday banned aircrafts from flying over a flashpoint border area with Ethiopia after alleging an Ethiopian military aircraft entered its airspace in “a dangerous escalation” to bilateral tensions.

“The Civil Aviation Authority issued an international aviation notice, stating that aircraft are prohibited from flying over al-Fashaqa border region,” the CAA said in a statement.

An official told AFP that “this decision is meant for military aircraft.”

Tensions have been running high between Khartoum and Addis Ababa over the Al-Fashaqa region, which has been hit by deadly clashes in recent weeks.

The region is inhabited by Ethiopian farmers who cultivate fertile land claimed by Sudan.

On Wednesday, Sudan said that an Ethiopian military aircraft flew over the Sudanese-Ethiopian border in that area, and warned of “dangerous ramifications”.

An Ethiopian military spokesman, General Mohamed Tessema, told AFP he had no “tangible information” concerning Sudan’s claim about the aircraft, but that the situation at the border was “normal” on Wednesday.

Khartoum and Addis Ababa have been trading accusations of violence in Al-Fashaqa since December.

This week, Ethiopia claimed that Sudanese forces were pushing further into the border region while Sudan said an Ethiopian gang killed at least six Sudanese people on the border.

In December, Sudan accused Ethiopian “forces and militias” of ambushing Sudanese troops along the border, leaving four dead and more than 20 wounded.

The two sides held border talks last month, and Sudan declared in late December that its army had restored control over all border territory that had been taken over by Ethiopian farmers.

The fighting sent some 60,000 Ethiopian refugees into Sudan.

The Sudanese-Ethiopian tensions come at a delicate time between the two countries, who along with Egypt have recently hit another impasse in talks over the massive Grand Ethiopian Renaissance Dam on the Blue Nile River.