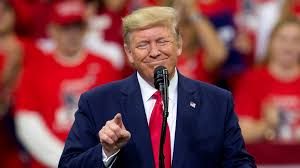 For roughly six minutes Thursday night, President Trump predictably singled out Rep. Ilhan Omar (D-Minn.) during his campaign rally in her home district of Minneapolis. As photos of Omar wearing a headscarf flashed across jumbo screens at the Target Center in the city, Trump ramped up his broadsides against the freshman lawmaker, slamming her as an “America-hating socialist” and a “disgrace.” But he didn’t stop there.
The president soon widened his attack to target Somali refugees in Minnesota, a group that includes Omar, a naturalized U.S. citizen who was born in the East African country. He promised rally attendees, who booed loudly at the mention of the state’s Somali residents, that he would “give local communities a greater say in refugee policy and put in place enhanced vetting and responsible immigration controls.”
“As you know, for many years, leaders in Washington brought large numbers of refugees to your state from Somalia without considering the impact on schools and communities and taxpayers,” Trump said as some in the crowd jeered, adding, “You should be able to decide what is best for your own cities and for your own neighborhoods, and that’s what you have the right to do right now, and believe me, no other president would be doing that.”
Trump’s comments, the latest escalation of his ongoing feud with Omar and Somali refugees, drew fierce rebukes Thursday night from Sen. Amy Klobuchar (D-Minn.), a Democratic presidential candidate, and Minneapolis Mayor Jacob Frey (D). Omar also hit back at Trump over his criticisms of her.
“His hate is no match for our movement,” Omar tweeted, encouraging her followers to donate to her campaign.
At his rally just now, Trump called me an “America-hating socialist” and a “disgrace.” He shouted xenophobic conspiracy theories about me. He scolded my district for voting for me.

His hate is no match for our movement. Stand with me by donating now: https://t.co/QdUrT9zJsr pic.twitter.com/Ik8I9zlRTf
— Ilhan Omar (@IlhanMN) October 11, 2019
In a tweet, Klobuchar chided Trump for “using immigrants and refugees as political pawns!”
“Immigrants and refugees have helped make our state a wonderful place to live and work — which is far more than this President has done,” she wrote.
The President just attacked Somali Americans in his rally in Minnesota. Immigrants and refugees have helped make our state a wonderful place to live and work — which is far more than this President has done. Stop using immigrants and refugees as political pawns!
— Amy Klobuchar (@amyklobuchar) October 11, 2019
Meanwhile, Frey had a pointed response to Trump telling the rally crowd to “speak to your mayor” about the president’s recently issued executive order that could keep refugees from being “resettled in any city or any state without the express written consent of that city or that state.”
“Consent given,” Frey tweeted. “Immigrants and refugees are welcome in Minneapolis.”
Minnesota has the largest concentration of Somalis in America, with more than 52,000 people in the state reporting Somali ancestry, the Star Tribune reported in July, citing 2017 data from the U.S. Census Bureau.
Somalis coming directly from Africa, described as “primary refugees,” started being allowed into the state in 1993, according to the Minnesota Department of Health. Since then, Minnesota has welcomed almost 24,000 primary refugees, in addition to those who originally may have been relocated elsewhere in the U.S. and later moved to the Midwestern state because they were drawn there by word of mouth.
“When the people in the refugee camps heard about the early arrivals that came here and were well received, they reported back to their relatives,” Abdisalam Adam, a Somali American, told the Minnesota Historical Society in 2004.
Ahmed Samatar, who came to the United States from Somalia in 1974 to attend the University of Wisconsin, told WCCO that Minnesota is particularly enticing to refugees because of its strong economy and reputation as “a kind and progressive place.”
“It is the nature of the welcome itself and how hospitable that is,” said Samatar, now a professor of international studies at Macalester College.
Trump, however, has not viewed the Somali refugees with the same kindness.
Two days before the 2016 presidential election, then-candidate Trump told the crowd at a campaign rally in Minneapolis they had “suffered enough” as a result of “filthy refugee vetting” that had allowed an influx of Somalis into their state. He promised that if he became president, refugees would not be admitted “without the support of the community where they are being placed.”
In recent years, Trump also reportedly “raged” at then-acting homeland security secretary Elaine Duke, “asking why he could not ban refugees from ‘f—— Somalia,’” New York Times reporters Julie Hirschfeld Davis and Michael D. Shear wrote in their new book, “Border Wars: Inside Trump’s Assault on Immigration.”
Davis and Shear noted that Trump and senior policy adviser Stephen Miller “seemed to have a particular dislike for Somalia, often citing it or its nationals when they spoke of the potential dangers of refugees and other immigrants.”
In September, the Trump administration issued an executive order giving state and local governments more freedom to reject refugees. The action came the same day the federal government announced it had again cut its refugee program and will allow 18,000 applicants next year, a historic low. Trump has also made efforts to ban travel to the United States from several countries, including Somalia and other Muslim-majority nations.
Trump administration slashes refugee limit for the third consecutive year to a historic low of 18,000

On Thursday, ahead of the president’s most recent visit to Minneapolis, a number of Somali residents were on edge, the Star Tribune reported. Community leaders told the newspaper they were working with the FBI and had armed security guards monitoring Somali-owned businesses. Citizens, namely Muslim women with hijabs, were also advised to be watchful.
“When it’s happening in your own town and city it is more close to home than when it’s somewhere far,” Minnesota state Rep. Mohamud Noor (D), whose district includes Minneapolis, told the Star Tribune. “So we are trying to temper the fear that exists in the community.”
During the rally, Trump’s anger with Omar was apparent as he scolded the crowd for electing her. Earlier this year, Omar and three other minority Democratic congresswomen were targeted by Trump in a racist tweet that went on to inspire a rally chant of “Send her back!” directed at the first Somali American congresswoman.
How a racist tweet became a Trump rally chant in three short days

We Jews have seen this before, as have countless other minorities. This is the powerful hurting the vulnerable to empower themselves. https://t.co/o3Oy1S2KPj
— Elad Nehorai (@PopChassid) October 11, 2019
The modern day Hitler
As Trump rallies against Somali refugees in Minnesota and insists on throwing them out

The red shirts, red caps
Are the new Brown Shirts
Truly Terrifying #TrumpMinneapolis #Trump pic.twitter.com/TLma8nsAQU
— Mara McEwin (@maramcewin) October 11, 2019
The special hate that Trump and the alt-right have for Somalis, above and beyond all other immigrant groups, has always fascinated and disgusted me. https://t.co/G3NdOawfOb
— Noah Smith ? (@Noahpinion) October 11, 2019
While Omar has yet to specifically address the president’s comments on Somali refugees, she retweeted a former Minnesota state representative who pointed out that Trump supporters have been responsible for making death threats against her and for mailing bombs to Democrats.
Somalis in Minnesota, however, had a more direct response to Trump: They plan to get him back at the polls, the Sahan Journal, which covers immigration and refugees in the state, reported.
“The only thing I know for certain is that I will not vote for Trump,” Ibrahim Dahiye told the Journal. “I know he hates us.”