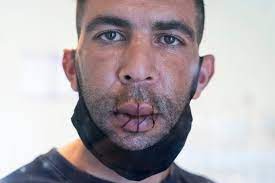 Despite the deteriorating situation, the Belgian government is yet to come up with a plan to continue hosting the migrants, a global responsibility every country is expected to share.

Hundreds of undocumented migrants have been on a mass hunger strike for weeks in Belgium. Some of the protesters have sewn their lips to pressure the authorities to grant them the right to remain in the country.

More than 400 migrants are camping out at several locations including universities and churches in the heart of Brussels. They stopped eating on May 23 after four months of talks with immigration authorities broke down.

Many are emaciated as they are cared for by health workers who are using saline drips to keep them hydrated and tending to the lips of those who stitched their mouths shut in a bid to show they have no say over their plight.

“We sleep like rats,” said Kiran Adhikeri from Nepal who worked as a chef in a restaurant that was closed due to the pandemic. “I feel headaches, stomach pain, the whole body is full of pain”, Adhikeri said.

Many of the migrants, who are mostly from South Asia and North Africa, have been in Belgium for years without legal residency papers. Their livelihoods have been put at greater risk by the pandemic shutdowns that led to the loss of jobs.

“All these actions have one goal: get regularization, show that we need documents. We don’t do that for nothing,” said Yasser Medouni, a 26-year-old from Algeria who arrived in Belgium five years ago.

“Despite all our skills and the fact that we are here to work, not just to collect money, the answer remains the same, to ‘go home’. It is incomprehensible,” said 42-year-old Algerian Abdeslam who refused to give his surname.

Although the deteriorating situation of migrants has drawn domestic and international attention, the Belgian authorities are adamant about not granting the whole group a collective right to remain in the country.

“They say that there are 150,000 living here illegally, and the 200 people that decide to stop eating should be regularized individually? What would be the result? A week later you get 200, 2,000, 20,000 people who would do exactly the same”, Junior minister for asylum and migration Sammy Mahdi said.

As the hunger strike continues, it has also drawn the involvement of the six biggest French-language universities in Belgium.

In a joint statement, the rectors called on the authorities to “use all the legal means in their power” to find solutions, while “urging” the protesters to put an end to their action.

The head of Universite Libre de Bruxelles, where some demonstrators are located, said she was “particularly alarmed by the state of health of the hunger strikers” and feared they may face “irreversible consequences”.

Belgium, like so many other wealthy European nations, has had an ambivalent relationship with migration. Since the 1960s, many have been invited to come work and help build states across the continent after its infrastructure was torn apart in World War II. However since 2015, millions of migrants from particularly war-torn Syria, Afghanistan and conflict-hit countries from West Africa, have arrived on the shores of Europe, triggering waves of anti-migration rhetoric across the countries.

In Belgium, still few of them were fully accepted in society and became the brunt of an often racist backlash when economies took a dip. Many of those on hunger strike now were not part of any legal program but have worked in the gray economy in which they have no social protection and are often at the mercy of unscrupulous bosses.

The French-speaking Socialist and Green coalition partners have called for a more flexible approach that could give the hunger strikers a better chance at obtaining the necessary papers. That has come as tensions heightened among the seven partners that have comprised the fragile coalition government since last October. Their government program still is not specific on how to deal with such a migrant situation.

However, as the Belgian bureaucracy has no clear plan for a way out, the scenes at the three locations in Brussels look increasingly desperate, with some people unable to stand up because they have become too weak, echoing the urgent need for a permanent solution for migrants.

Egypt Says Has No Objections to Any Ethiopian Dam