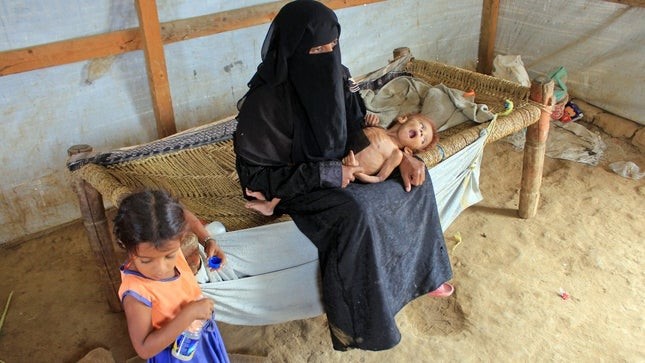 Yemen is starving to death.

More accurately, Yemen is being starved to death.  The Kingdom of Saudi Arabia, along with the United Arab Emirates and other Gulf States, has deliberately chosen to weaponize starvation in its war against Yemen’s Iran-backed Houthi rebels.  The Saudi-led coalition has imposed a land, sea, and air blockade of Yemen which keeps desperately needed food, fuel, and medicine from the 90% of Yemenis who are completely reliant on humanitarian aid from the outside world.

The coalition claims that the blockade is necessary in order to detect weapons being smuggled from Iran to the Houthis.  The coalition claims that UN Security Council Resolution 2216 (Apr. 14, 2015), which imposed an arms embargo on Yemen, furnishes the legal authority for the blockade.  By a happy coincidence, Saudi Arabia helped draft UNSCR 2216.

March 25 was the sixth anniversary of the Saudi-led intervention in Yemen.  The coalition’s objective is to restore Yemen’s President Abdrabbuh Mansur Hadi who the Houthis ousted in January 2015.

The US has been a partner in the Saudi coalition from the beginning.  In March 2015, President Barack Obama wanted to mollify the Gulf States who objected to his prospective nuclear deal with Iran.  Obama decided to support the Saudi-led coalition with intelligence sharing, targeting assistance, arms sales, spare parts for coalition warplanes, and (until November 2018) in-flight refueling of coalition aircraft.

The war would not be possible without US support.  The Brookings Institution’s Bruce Riedel declares that if the US and UK cut off logistic support the Royal Saudi Air Force would be “grounded.”  Much of the Royal Saudi Navy’s equipment and some of their ships are supplied by the US.  Dr. Shireen Al-Adeimi, a Yemeni-American activist who teaches at Michigan State University, is scathing.  “Saudi Arabia is utterly and completely incompetent,” she says.  Al-Adeimi says that the Saudis cannot repair or maintain their own aircraft, and that the US even trains Saudi pilots.

“There Is No Blockade”

President Joe Biden, formerly vice president under Obama, came into office promising to end US assistance to the Saudi-led coalition.On February 4, in his first major foreign policy speech as president, Biden promised to end US support for “offensive operations” in Yemen.

Biden’s speech was met with enthusiasm, but also with questions.  What forms of support, if any, has Biden cut off to the Saudis and their partners?  How does the Administration distinguish between offensive and defensive operations?  Biden did not even mention the blockade.  Does the blockade qualify as an “offensive operation”?  Bruce Riedel of the Brookings Institution thinks it does.  Riedel states unambiguously that “The blockade is an offensive military operation that kills civilians.”

On April 6, 70 humanitarian organizations, including the Friends Committee on National Legislation and the Yemen Relief and Reconstruction Foundation, and celebrities like Mark Ruffalo and Amy Schumer, sent a letter to Biden, which reads in part:

“We are deeply concerned that prior to the CNN report,[1] no U.S. official in the new administration had explicitly publicly acknowledged the six-year-old, Saudi-imposed blockade—much less criticized it.”

The letter notes with disapproval a claim made by US Special Envoy Tim Lenderking that “food continues to flow through Hodeidah unimpeded.”  No, it doesn’t.  That’s a major reason that Yemen is close to famine.

Lenderking’s statement must have pleased Saudi Foreign Minister Prince Faisal bin Farhan Al Saud.  During an April 5 interview with CNN’s Becky Anderson, Prince Faisal, who looks all of 12 years old, said that there is “a continuing flow of goods and services both through Hodeidah and four border crossings and as well there are two other ports that are active.  There is no blockade.”

Millions of starving Yemenis disagree.  Does it need to be said that a US diplomat should not be spewing Saudi propaganda?  Apparently, it does.

Prince Faisal was referring to the UN Verification and Inspection Mechanism for Yemen (UNVIM) which began operating on May 5, 2016.  UNVIM was meant to supplant coalition control of shipping.  Despite UNVIM, the coalition remains in unchallenged control of naval traffic in the Red Sea.  The coalition intercepts and detains ships for periods as long as 100 days, including ships which UNVIM has determined are free of weapons.  This violates paragraph 15 of UNSCR 2216 which allows ships to be inspected only when there exist “reasonable grounds” to believe arms are aboard.  Prince Faisal disingenuously makes it sound like UNVIM is functioning as intended.

UNVIM’s ineffectiveness was on view this year.  Despite a desperate fuel shortage in Yemen, the Royal Saudi Navy had prevented oil tankers from entering the Houthi-controlled port of Hodeidah for the first three months of 2021.  Finally, on March 25, the Saudis allowed the oil tanker Thuruya to dock.  The Thuruya was one of fourteen tankers the Saudis had detained in the Red Sea.  All fourteen tankers had been cleared by UNVIM.

Two of the fourteen ships, the Mt. Majnoon and the Dynasty, got tired of waiting for Saudi permission to proceed to Hodeidah and sailed for destinations outside of Yemen.  According to the Arabian Rights Watch Association, the Saudis had detained the Mt. Majnoon for 344 days and the Dynasty for 220.  Eight tankers remaining in the Red Sea are still waiting for Saudi permission to dock.

CNN senior correspondent Nima Elbagir reports seeing “hundreds” of trucks stranded along the highway outside the port of Hodeidah, full of food which is spoiling because there is no fuel for the trucks.  There still isn’t.  The tankers which the Saudis allowed into Hodeidah at the end of March were not carrying petrol which cars and trucks need.

It does not take months to search a ship for weapons, particularly not ships which have already been cleared by UNVIM.  Something else is at work: a deliberate strategy of starving Yemenis to death.  Kamel Jendoubi, Chair of the UN Group of Eminent Experts on Yemen, reported to the Security Council in December that “Civilians in Yemen are not starving; they’re being starved by the parties to the conflict.”

The Houthis were less than impressed by the UN-backed peace plan the Saudis unveiled on March 22.  The Houthis have said that they will not agree to a ceasefire until the coalition blockade is completely lifted.  The Saudi plan would allow only some flights into Sanaa airport and only partially lift the naval blockade.  The Houthis branded the Saudi plan “not serious and “nothing new.”  They’re right.

Yemen doesn’t have time to wait for a ceasefire.  In Yemen, a child dies every 70 seconds.  This year may see 400,000 children under the age of 5 die of starvation.  Biden must pressure the Saudis to lift the blockade now, with or without a ceasefire.  Will he?  There are reasons to doubt it.  Biden hasn’t even condemned the blockade.  Biden might as well join Prince Faisal in denying that the blockade exists.

One of these days, Biden may get around to answering how he will end the war in Yemen.  I am very much afraid that Biden’s response will contain the word “holistic.”  That will be the Kiss of Death for Yemen.  We will be told that the war in Yemen needs a holistic rather than a piecemeal solution.  That will mean that the Administration has decided to allow the blockade to continue until there’s a ceasefire while Yemenis continue to die.

If Biden takes this tack, it will be necessary to force his hand by having Congress pass another War Powers Resolution.  But one way or another, the blockade has to end now.