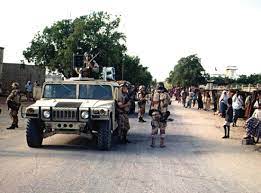 THE ART OF LOSING

The Bush administration used the “light footprint” strategy of Afghanistan to combat terrorism in Iraq, Libya, Yemen, Syria, and Somalia, to name but a few. It has not gone well.

Twenty years ago—and less than one month after the catastrophic attack of 9/11—the United States mounted a decidedly unorthodox campaign in Afghanistan in an effort to destroy Osama bin Laden’s al-Qaeda terrorist network, and to remove from power the Taliban regime in Kabul that hosted the perpetrators of the most devastating attack on American soil since Pearl Harbor. Because Afghanistan was a remote, landlocked country with very little infrastructure, a conventional military invasion was deemed impossible just a few days after the most spectacular asymmetric warfare attack in modern history. It would have taken too long to plan and execute.

CIA counter-terrorism officers stepped into the breach. They believed that a handful of squad-sized CIA-Special Forces teams could be helicoptered into the country with satellite phones, laser range-finders, and a wealth of state-of-the-art communications equipment, link up with a loose coalition of warlords who were engaged in active resistance against the Taliban, and destroy most of the several thousand al-Qaeda fighters then in the country, along with even greater numbers of their Taliban allies. Most of the killing, the spooks told President George W. Bush, would be done by precision munitions delivered by American aircraft and drones. The indigenous militia commanded by the warlords, some on foot, some mounted on horses, could do the mopping up with the help of U.S. Special Forces, who would advise the ground commanders, coordinate their operations, and call in the air strikes.

In three months, more than 10,000 Islamic militants were killed, 7,000 were captured, and the Taliban and al-Qaeda were ejected from Afghan soil. The only bad news, which didn’t seem so bad at the time, was that bin Laden and Taliban leader Mullah Omar had escaped, along with a good many senior and mid-level operatives. We’d get them soon enough, the thinking went.

The Bush administration embraced this success, which seemed at the time to be almost as astonishing as the 9/11attacks themselves, and extended the “light footprint” strategy used in Afghanistan to combat terrorism in Iraq, Libya, Yemen, Syria, and Somalia, to name but a few.

Recently, military and foreign policy experts have expressed concerns that the decade-long CIA/Special Forces-led campaign in Somalia against al-Shabab, a highly resilient and adaptable al-Qaeda affiliate, appears to be failing. The Biden administration, which has tightened up restrictions on when and where U.S. military commanders in the theater can order air strikes, is currently reviewing American strategy in the country.

Whatever it decides to do in Somalia, and we should know quite soon, will offer significant clues about how the administration intends to conduct counter-terrorism operations generally, even as the military and the CIA turn their focus to potential conflicts with China and Russia.

American military involvement in Somalia, one of the world’s most impoverished and anarchic states, goes back to the early 1990s, when extensive U.S. and U.N. efforts to stabilize the war-ravaged, half-starved country that occupies strategic terrain on the Horn of Afri came to an abrupt end after eighteen elite American soldiers were killed in a sprawling, chaotic street battle in Mogadishu against the forces of the powerful and wily warlord Mohammed Aidid in October 1993. That battle is the subject of the best-selling book by Mark Bowden, Blackhawk Down, which was later made into a riveting, if somewhat gory, film of the same name.

The United States withdrew from Somalia in humiliation and confusion, not to return again until 2005, when the CIA began to funnel large amounts of cash to a new generation of warlords in order to fight cells of al-Qaeda operatives who’d set up shop there. Al-Shabab, meaning “the Youth” in Arabic, seeks to establish a fundamentalist Islamic state in Somalia. It was born as a resistance movement to the rising power of the American supported warlords.

Since 2006, the United States has spearheaded a shadow war against the organization, largely with Special Forces and CIA paramilitary types. Americans have trained the fledgling Somali army, and a small, elite Somali counter-terrorist force, reportedly led by CIA officers in combat operations. America has been the leading contributor of development funds for the country’s frail government and social institutions, having spent $450 million in humanitarian aid in fiscal year 2019, and paid for the lion’s share of the cost for peacekeeping forces from the African Union, to the tune of $2.5 billion over the last decade.

The counter-terror program in Somalia has enjoyed some success. In 2011, a drone strike took out Fazul Abdullah Mohammed, an al-Qaeda operative who figured prominently in planning the bombings of the U.S. embassies in Kenya and Tanzania, in which more than 200 people were killed and four thousand wounded. In September 2014, another drone strike killed Ahmed Abdi Godane, the senior leader of al-Shabab. An undisclosed number of other senior leaders of the organization have perished in the campaign.

In March 2017, Donald Trump removed many of the “rules of engagement” strictures on U.S. air strikes and upped the number of American service members in Somalia to about 700. Over Trump’s four years in office, the number of airstrikes increased sharply. By the time he left office, some 202 strikes had been carried out, compared to a mere 48 during Barack Obama’s eight years in office.

Yet despite the increased military pressure, al-Shabab has gained considerable strength and influence over the last year or so, and not only in the countryside. It has also infiltrated the government bureaucracy in Mogadishu, and controls most of the activity in the port there.

“Transparency International, a highly respected German non-profit agency, rates the Somali government as tied with that of South Sudan as the most corrupt in the world.”

Experts say the organization has continued to recruit successfully, and to expand its coffers through smuggling, extortion, and the collection of tolls. In 2020, according to U.S. government sources, al-Shabab collected no less than $120 million in revenue. Perhaps most disturbingly, the organization has managed to establish a shadow government in many parts of the countryside, a parallel political infrastructure along the lines of the Vietcong in South Vietnam, with its own courts, bureaucracy, and laws. Its extensive bomb-making activities are said to be increasingly sophisticated, and there has been no letup in civilian casualties from the attacks.

Al-Shabab now has about 5,000 fulltime fighters conducting attacks and IED operations against government security forces and the civilian population, but the terror network’s fighters are better led and more highly motivated than the government’s. “The bottom line,” writes Paul D. Williams, a leading expert on the conflict who is a professor at the George Washington University, “is that U.S. military actions have failed to blunt al-Shabab’s ability to attack Somalis and international personnel using a combination of asymmetric tactics—including ambushes, IEDs, suicide commando raids, and assassinations—and more conventional assaults on forward-operating bases.”

Major factors in al-Shabab’s recent success have been the weak and ineffectual performance of the current federal government, and the inability of the nation’s small political class to pull together and decide on long-term power-sharing arrangements. Despite billions in investment from various Western countries, the government in Mogadishu is deeply corrupt and wholly given over to infighting and intrigue.

This past April, when the current president, an American national named Mohamed Abdullahi Mohamed, refused to hold elections on schedule, fighting broke out between various government security forces in the capital. Transparency International, a highly respected German non-profit agency, rates the Somali government as tied with that of South Sudan as the most corrupt in the world, which is really saying something.

Tricia Bacon, a longtime former State Department expert on counter-terrorism who is now a professor at American University, writes that al-Shabab “draws strength from exploiting the government’s weakness—including the divisions between the Somali Federal Government and the federal member states, especially in the rural areas of Southern Somalia. Al-Shabab’s courts remain the preferred venue for dispute resolution, even among residents of Mogadishu who may not support the group’s aims or harsh forms of punishment. The roads it controls remain the best routes to travel within Somalia to avoid predation… While the airstrikes and military operations inflict losses, the fundamental weakness of the Somali state provides a vacuum that the group has and will continue to fill.”

What, then, will the Biden national security team do? One option would be to redeploy the 600 or so American troops that Trump withdrew at the very end of his term as president, with a view to stepping up military pressure. Another option: He could pull the plug on the American military effort entirely, as he did in Afghanistan, and put an end to one more “forever war.”

“Biden’s recent statements on Afghanistan and counter-terrorism strategy suggest rather strongly he won’t be expanding the American military effort.”

A third option, much favored by Professor Williams, would be for the administration to shift its focus from military operations to diplomacy, with a view to establishing a new power-sharing agreement between the states and the federal government, and then use a combination of carrots and sticks to try to bring al-Shabab into the political process, where it could share in power with other key parties.

Biden’s recent statements on Afghanistan and counter-terrorism strategy suggest rather strongly he won’t be expanding the American military effort, and that he has become increasingly skeptical about the efficacy of the military’s focus on knocking off the senior leadership of terrorist groups, for a very simple reason: Again and again, in Afghanistan, Iraq, and Somalia, these “successful” missions do not seem to have much strategic effect, and they are seen as highly controversial by the international community from both a strategic and a moral point of view. Invariably, competent replacements for fallen or captured leaders emerge, and their organizations adapt, evolve, and, as is the case with al-Shabab, thrive.

My best guess, based on what administration officials have been saying off the record, is that Biden will move along the lines suggested by Professor Williams, and foreground diplomacy and political coercion, while de-emphasizing military operations.