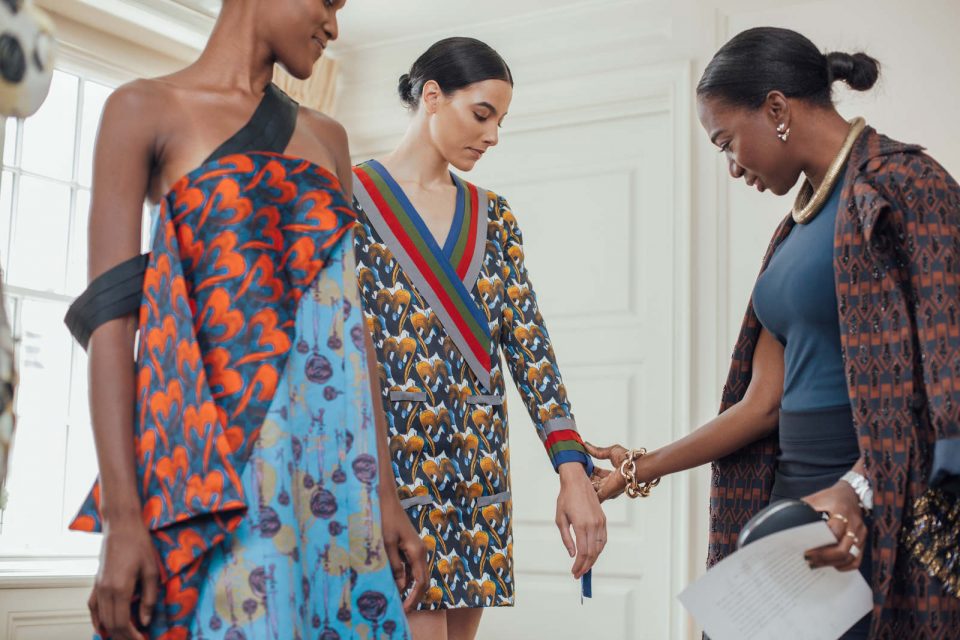 “I grew up knowing who Giorgio Armani and Gianni Versace were, but I didn’t grow up knowing any African designers. It’s a big problem, that not everyone’s included on this journey.”

So said Kenneth Ize, on the occasion of his debut show at Paris Fashion Week in February 2020.

Out to change that are an energetic roster of African designers who have created brands that are dedicated to sustainable, artisanal practices.

Even better news: their collections are now shoppable, thanks to the London-based boutique Koibird. A new collaboration with the renowned Lagos Fashion Week and a hand-picked edit of designers has just dropped on-site – and there are numerous wonderful labels to enjoy.

Among them: South African knitwear brand, Maxhosa, founded by Laduma Ngxokolo, whose colourful graphic pieces have caught the eye of Beyoncé and Alicia Keys. Then there is Lisa Folawiyo, who has also garnered a fan-base of high-profile clientele including Solange Knowles and Lupita Nyong’o, both of whom have worn the Nigerian designer’s sparkling gowns.

Koibird’s launch celebrates the vibrant beauty of African culture, and the edit was released alongside a look book photographed by Ruth Ossai – who was raised between Nigeria and Yorkshire – and styled by British Vogue’s fashion editor-at-large, Julia Sarr-Jamois.

Below, seven designers to know from the collaboration.

Colourful patterns, including his signature handwoven Nigerian check, “asoke”, have made Kenneth Ize a global sensation.

The LVMH 2019 finalist made his debut at Paris Fashion Week in February 2020 and his showcase saw models Imaan Hammam and British Vogue’s former cover star, Adwoa Aboah, walk the catwalk alongside Naomi Campbell.

His recent designs looked to preserve African craft, and he worked with artisans in both Nigeria and Vienna – where he grew up – to create his collection.

The striking knitwear of Maxhosa is inspired by traditional Xhosa symbolism, beadwork, patterns and hues.

Laduma Ngxokolo founded the label in 2012 after graduating from the Nelson Mandela University in South Africa as he wanted to design a ready-to-wear collection that reflected his heritage.

Rich Mnisi founded his eponymous brand in 2015 after being awarded the Africa Fashion International Young Designer of the Year in 2014.

His expressive designs are an amalgamation of patterns, prints and textures that explore narratives of African heritage. Popular culture, art, film and music also inform his work, all given a contemporary twist.

Loza Maléombho’s designs are a fusion of traditional cultures and sub-cultures.

Established in New York in 2009, the brand relocated to Côte d’Ivoire in 2012 where it continues to work with artisans to create pieces of Ivorian tradition with a modern feel.

Former lawyer Lisa Folawiyo has won acclaim for her unique fusion of West African fabrics with glamorous beading techniques and embellishments. Part of a talented generation of Nigerian designers, since founding her brand in 2005 she has attracted a slew of famous fans including Kelis and Eve.

Folawiyo’s pieces are made exclusively using Ankara textiles which go through a 240-hour process before completion.

All Orange Culture items are manufactured in Lagos from ethically-sourced fabrics.

Its designs embrace both traditional African motifs, as well as streetwear, adhering to a unisex wardrobe formula – something which has attracted controversy in founder Adebayo Oke-Lawal’s native Nigeria, but one which he is quick to dismiss.

Aisha Obuobi named her Ghanian-founded brand after her grandmother, Christie Brown, who was an agile seamstress with a flair for vibrant clothing.

The brand follows a similarly rich design ethos, and prides itself on elaborate, textured pieces.