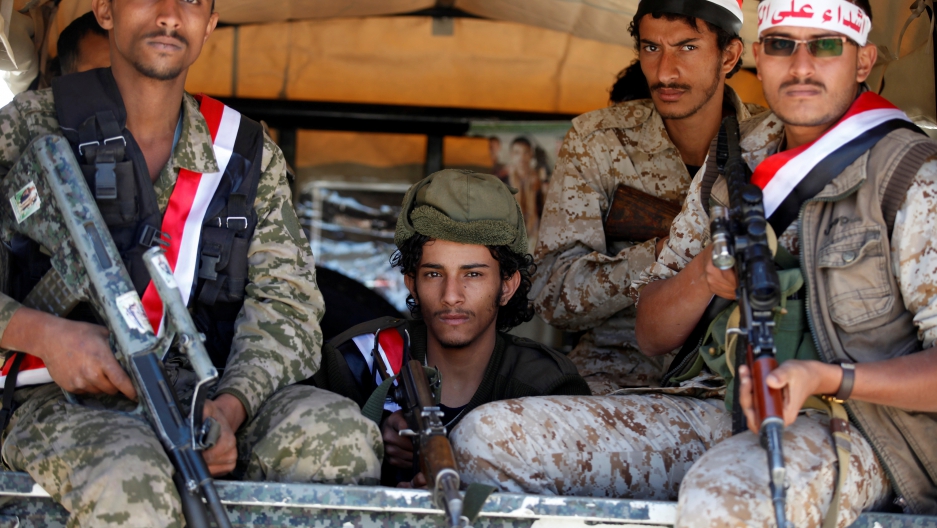 Talks between Saudi-led coalition and Houthis are focused on steps to lift a blockade on Houthi-held ports and Sanaa airport in return for a promise from the Iran-aligned group for truce talks.

Yemen’s warring parties are thrashing out terms for a peace deal that would extricate Saudi Arabia from a costly war and help alleviate a devastating humanitarian crisis, two sources close to the talks and a Houthi official said.

Talks between the Saudi-led coalition and the Houthis are focused on steps to lift a blockade on Houthi-held ports and Sanaa airport in return for a promise from the Iran-aligned group for truce talks, the sources said.
Houthi leader Abdulmalik al-Houthi made a commitment to an Omani delegation that visited Sanaa this month to enter into ceasefire discussions immediately after the blockade is lifted in line with the latest proposal from UN envoy Martin Griffiths, they said.
The coalition intervened in Yemen in March 2015 after the Houthis ousted the internationally recognized government from the capital, Sanaa.
The war has killed tens of thousands of Yemenis and pushed the country to the brink of famine. The Houthis have been attacking Saudi infrastructure with armed drones and ballistic missiles.
One of the sources said Riyadh was open to a deal but “would need some additional guarantees from Oman and Iran,” both with close ties with the Houthis.
If an agreement was reached, it would be the first breakthrough in UN-led efforts to end the war since stalled peace talks were last held in Sweden in December 2018. It would also hand Joe Biden’s administration a foreign policy win and ease tensions between Saudi Arabia and Iran.
US envoy Tim Lenderking and Griffiths visited Riyadh last week where they met Saudi, Yemeni and Omani officials to push for an agreement.
The Houthis’ chief negotiator Mohammed Abdulsalam told Reuters the group wanted to ensure reopening access to Sanaa airport and Hodeidah ports “without impossible conditions or other measures that would restore the blockade in other forms.”
“After that, we will discuss a comprehensive ceasefire which should be a real halt of hostilities, not a fragile truce, and that would include the exit of foreign powers from Yemen to facilitate political negotiations,” he said, adding the timing of foreign forces withdrawing would be subject to negotiation.
The coalition and the Saudi government did not respond to requests for comment.
Saudi Arabia, which launched direct talks with its foe Iran in April, will want security guarantees as its long border with Yemen leaves the kingdom vulnerable to turmoil in the Arabian Peninsula nation where multiple factions are vying for power and militant groups still have a presence.
Riyadh may also need to maintain some military presence in Yemen, particularly in the south where the Saudi-backed government and a separatist group have been locked in a power struggle despite being nominal allies under the coalition.
SECURITY GUARANTEES
More talks are expected between Omani and Saudi officials this week, the sources said.
Oman, which shares borders with Yemen and has long pursued a neutral foreign policy in regional disputes, hosts several Houthi leaders and has lent its weight as a regional facilitator to the negotiations.
A nationwide ceasefire deal would end the most violent aspects of the war — coalition air strikes on Yemen, Houthi cross-border attacks on Saudi Arabia and fighting in gas-rich Marib, the recognized government’s last northern stronghold.
This would pave the way for political negotiations on a transitional government but the process could prove arduous as the war has spawned parallel conflicts among many tribal leaders and warlords who have built powerful and independent militias.
The separatist Southern Transitional Council, trained and armed by the United Arab Emirates, is still pushing for independence for the south despite a Saudi-brokered fragile power-sharing deal between them and the Saudi-backed government.
Riyadh, where military spending has increased by billions of dollars over the past years, will welcome an exit from a war which Abu Dhabi quit in 2019 amid increasing Western criticism and rising tension with Iran.
Biden has taken a tougher stance against Saudi Arabia and the kingdom wants to manage that relationship and focus on attracting economic investment as it pivots away from its dependence on oil.
“The Saudis have been pressed on their backheels and no longer have forward ambition in Yemen,” said Kristin Diwan at the Arab Gulf States Institute in Washington.
“They need the baseline: an enforceable agreement to end Houthi rockets and incursions into the Saudi homeland, and some assurance of Yemeni independence from Tehran,” she said.
previous post