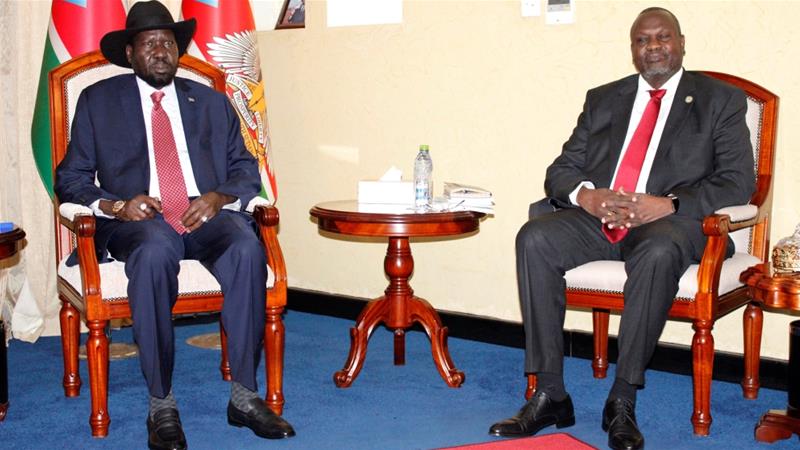 The rejection by Riek Machar dashes hopes of breaking a deadlock and ending a six-year conflict in South Sudan.

South Sudan’s rebels have rejected a peace offer by President Salva Kiir, which included plans to reduce the number of states but also create three administrative areas in the country.

The rejection by rebel chief Riek Machar, announced in a statement, dashes hopes of breaking a deadlock and ending a six-year conflict that has left at least 380,000 people dead and millions in dire poverty.

Kiir and Machar – who lives in exile – are under increasing international pressure to resolve their differences by a February 22 deadline.

Kiir on Saturday said the country would now be divided into the original 10 states – a key opposition demand – plus three “administrative areas” of Pibor, Ruweng and Abyei.

While Machar said he appreciated the government’s decision to “revert to ten states”, he expressed his dissatisfaction with the creation of the three administrative areas.

It “cannot be referred to as reverting to 10 states (and) as such cannot be accepted,” Machar wrote in the statement, cited by AFP news agency.

“We therefore call upon President Kiir to reconsider this idea of creating administrative areas,” he added.

The number of states is contentious because the borders will determine the divisions of power in the country.

When it gained independence from Sudan in 2011, South Sudan had 10 states, as set out in its constitution.

On Saturday, Kiir said returning to a system of 10 states was a “painful decision but a necessary one if that is what brings peace”.

He issued an order late Saturday, relieving the governors of all 32 states of their posts.

The president had said the final matter of states would be debated once the unity government forms.

Of the three proposed areas, the most contentious is thought to be oil-rich Ruweng, in the north.

Oil provides almost all of the government’s revenue in South Sudan, making it one of the world’s most oil-dependent nations.

Ruweng has been one of the most heavily fought-over areas in the civil war and is claimed by both the Dinka people, of whom Kiir is one, and the Nuer, of whom Machar is one.

International pressure by the United States and others has been building on Kiir and Machar to meet a February 22 deadline to join forces in a transitional government.

The two rivals agreed on a peace deal in 2018, pressured by the United Nations, the US and countries in the region.