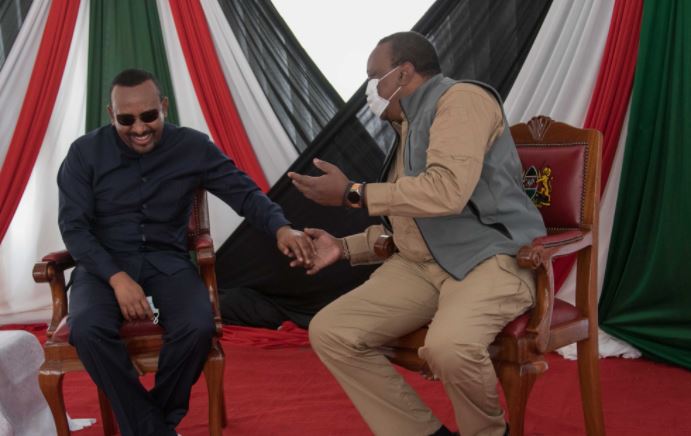 Abiy is on a two-day official visit to Kenya. [Courtesy]

Ethiopian Prime Minister Abiy Ahmed who is in the country has commissioned the Moyale One-Stop Border Post in Marsabit County.

He was joined by President Uhuru Kenyatta who received him in Moyale, Marsabit County on Wednesday.

Speaking at the launch, Abiy said that the project was possible because of the unity between the two countries.

“We are one people, one country. This new infrastructure will help the two countries in terms of business, trade and tourism,” he said.

The PM challenged President Uhuru to work on the security of the northern region, which he says will help transform it, given its potential.

His sentiments were echoed by Uhuru who said: We cannot establish an economic history if we are consistently experiencing insecurity.”

Abiy is on a two-day official visit to Kenya, aimed at increasing the volume of trade between the two countries whilst tightening their friendship.

Subscribe to our newsletter and stay updated on the latest developments and special offers!

After this, the two leaders will be heading down to Lamu County whey will inspect the ongoing construction of Lamu Port then to Mombasa County.

Earlier, we had reported that Abiy and President Uhuru Kenyatta will be inspecting various infrastructure projects.

The first agenda of the day will be to commission the One-Stop Border Post at Moyale in Marsabit County.

He was received by President Uhuru at the border post which will ease immigration and customs clearance.

He is also expected to inspect the new Lamu Port in Lamu County, an anchor project of the Lamu Port-South Sudan-Ethiopia-Transport (Lapsset) corridor.

The visit is expected to strengthen bilateral trade relations between the two East African nations, as they continue enjoying each other’s support.

The two leaders have in the past met on several occasions in their respective countries to discuss on trade or mark celebratory events.

Abiy’s visit to Kenya also happens to be his first foreign trip since he announced the completion of a military operation in the Tigray region.

The infighting has since left thousands of people dead and tens of thousands displaced.

He announced the cessation of military operations in Tigray in late November, following what was a three-week-old war that shook the country.

Abiy said: “I am pleased to share that we have completed and ceased the military operations in the Tigray region. Our focus now will be on rebuilding the region and providing humanitarian assistance while Federal Police apprehend the TPLF clique.”