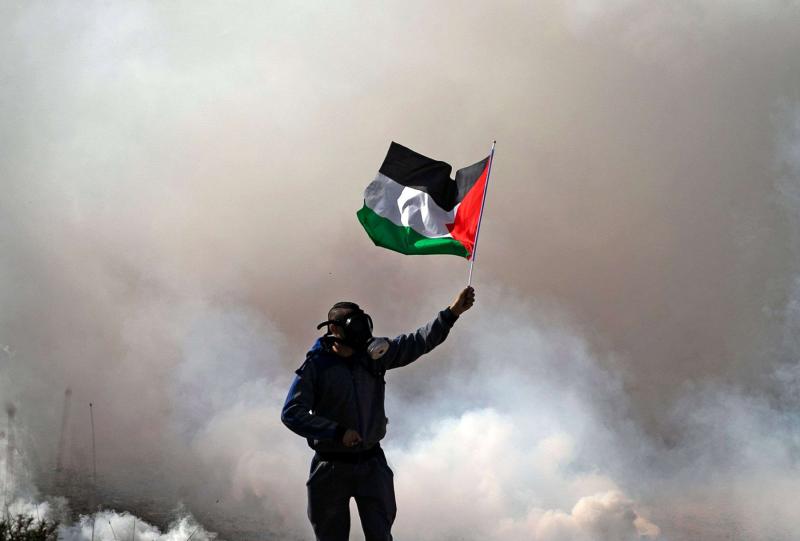 A Palestinian protester east of Nablus waves a Palestinian flag amid smoke from tear gas fired by Israeli security forces during a demonstration against the expansion of settlements, on December 18, 2020. (AFP)
Trust and hope are the two potent weapons that are now completely missing from the feelings of the Palestinians.
updated 25/12/2020

Nobody has so far asked for the resignation or dismissal of Palestinian President Mahmoud Abbas; but the case for his removal from the leadership of the Palestinian Authority, and urgently, is very strong today.

And it’s not just Abu Mazen’s “mental chaos” that is the least damaging of his “policies.” The man has no policies to begin with.

Say what you will in praise of the man’s history and past. The presidency of the authority, however, is not an off-limits subject. Power is not a private property. It is public domain. No one has the right to abuse it in an absolute manner, as if he or she is not subject to scrutiny and accountability. In the end, there is always an inventory to be carried out for people to know what they have gained or lost because of that power.

Abu Mazen has been failing in his management of his authority for at least ten years. He is no longer capable of formulating concrete directions that would take the Palestinian cause forward. He is, on the contrary, dragging it backwards. Neither the Palestinians inside Palestine nor those in the diaspora are happy with what he is doing. The president is acting like a chef who is smashing his dishes himself, to vent his anger. President Abbas has eroded his relations with most Arab countries, and not just those that chose to conclude peace agreements with Israel. He has failed to preserve the Arab consensus about his cause. Worse, he is now himself engaged in chipping away at this consensus.

Since announcing the suspension of negotiations with Israel, President Abbas has not come up with any alternative strategy. He did not place his bet on anything else, nor did he hold working and reflection sessions with senior Palestinian figures from among both those whom he likes to hear and those whom he doesn’t like to be with in the same room, in orderto formulate options and alternatives. The man simply does not listen to anyone at all, except to his own echo. And this is a disaster.

It’s not the case that the Palestinians are unable to defend their land and destinies. Abbas is the one who is helpless. He is the biggest loser, because he has bound himself with statements and security commitments with Israel that ended up making him unable to move a single hair in the face of Israel. The more time passes, the more the Palestinians lose their capacity to confront the oppressive policies of Israel or its expansionist and annexation policies that have eaten away at their dream of a Palestinian state, at least geographically.

It is a shame that the last popular movement to protest Israeli policies took place five years ago, after Israeli settlers had set fire to Al-Dawabsheh family home on July 31, 2015. Even that move was a mere instance of chaotic revenge and counter-revenge. Neither the Palestinian Authority was able to control it or rationalise it, nor even recognise him. Rather, it stood against it and turned itself into an Israeli security guard searching for knives inside children’s bags.

The main reason for the chaos was the fact that the Palestinian Authority was neither politically nor intellectually capable enough to formulate rational paths of resistance for its people. The authority simply left its people to chaos, only to reap consequences particularly direr than the damages. The difference between stones and knives was a difference of decline in options, transforming the “resistance” from a popular protest against the occupation into individual acts of revenge that show great despair.

At that particular time, President Abbas should have resigned, because he was no longer the leader of his people, nor was he able to draw a roadmap that would pull the cause of his people out of the impasse.

He just sat there in his office, patiently waiting for Israel to have sympathy for him and return to the negotiations table, to halt settlement operations, or to ease off the daily killings of his citizens. And nothing happened. Year after year, the Palestinian Authority kept repeating its impotence and adding to it, until its waiting game turned into a real death wish.

There are no guarantees that a “unified national strategy” would necessarily have taken the right path, because empty slogans have remained the parallel authority in public thinking. The division occurred not only because the authority of President Abbas failed to be an inclusive authority, but because its options, and the options of the other side as well, were not the subject of an open national debate, and because the values ​​of democracy were not to be taken into account, so that the final choice would return to the Palestinian people themselves, with a government that is in place to expresstheir will, whatever the result may be.

When a people cannot find a decent leader in their authority, and when they discover that this authority does not represent or express their will, it is only normal that they become atomised and turn into individuals torn apart by resentment and eaten away by despair.

President Abbas clings to his power, like someone clinging to a void. He actually sees his boat sinking, but continues to delude himself with being able to survive, despite all his failures.

Trust and hope are the two potent weapons that are now completely missing from the feelings of the Palestinians. This is why their “resilience” and “resistance” are declining. It’s a form of collective suicide, led by President Abbas and his cronies.

President Abbas denies that there is corruption in his authority, but the Palestinians know that he is either lying or incapable of seeing it. In either case, it is a big disaster.

The resignation of Hanan Ashrawi, a member of Abbas’s inner circle, shows that the rift has reached a level that the “Palestinian leadership” had not reached in its darkest and most difficult times.

President Abbas is also very irritable. His angry disposition is in itself a sign of helplessness. A person gets angry, not because the wind is blowing against his wishes, but because he does not know what to do about the changes occurring around him, especially when he did not anticipate them and prepared nothing to meet them or invest in them. President Abbas has led his authority to stand still outside the flow of time, as if he wanted everything else to stop as well. Waiting for what? no one knows.

Instead of expanding the circle of communication and coordination with the Arab countries that chose to conclude peace agreements with Israel in order to gain their support and solidarity, he preferred to fight a quixotic battle against windmills. He roared and frothed around the mouth, but then retracted and disgraced himself by retreating from what he had said and done, clearly showing that his mind is chaotic and unable to control his emotions. And this is too much.

In his most recent episode of insanity, he went to Doha in order to manoeuvre with it like it is manoeuvring with him, in a pitiful and blatant display of ridiculous chaos.

The Palestinians are neither impotent nor a herd of sheep nor are they suicidal. They will find a way, and the tyrants who control their destiny now will not escape punishment if they deny them their right to constructive change.

Throughout their history, the Palestinians have seen many tragedies, but their cause has never been, at any given day, doomed to disruption, chaos and despair as it is today. And President Abbas bears a substantial share of the blame for their current lot. Ali al-Sarraf is an Iraqi writer.