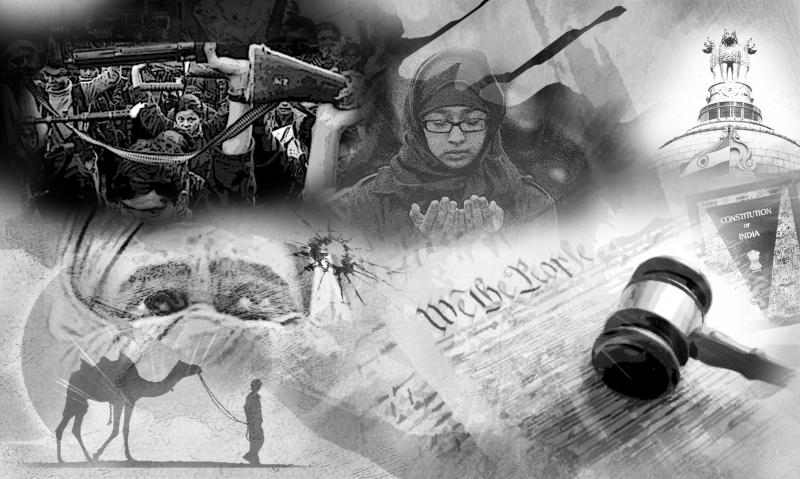 After India revoked the semi-autonomous status of the Muslim-majority territory, a devastating crackdown has taken a high toll on the region’s residents

For the past year, Fayaz Tilgami’s poetry has spoken of nothing but loss: a lost home, a lost language, a lost world.

“We have lost our existence. It has been snatched from us,” the 70-year-old Kashmiri poet said, his voice heavy with sorrow.

A year ago, on Aug. 5 last year, the government in New Delhi, led by Indian Prime Minister Narendra Modi, repealed article 370 of the Indian constitution.

For almost 70 years, the provision had given the disputed, majority-Muslim state of Jammu and Kashmir a semi-autonomous status, with special powers over issues such as jobs and residency.

The special status had been granted to Kashmir in exchange for joining the Indian union after India’s independence from Britain in 1947.

In one fell swoop, everything changed. With a swift presidential order, the Himalayan region was brought under the full control of the central government, led by the Hindu-nationalist Bharatiya Janata Party (BJP), and split into two union territories.

Politicians were imprisoned, phone services were suspended, an Internet blackout was imposed and thousands of Indian military troops moved into the region to enforce a strict crackdown, which has still not been fully eased. Journalists reporting on the situation in Jammu and Kashmir continue to be questioned and arrested under India’s anti-terrorism laws.

“It is not merely our land, but it is also our identity which has been robbed,” Tilgami said.

He described the repeal of article 370 as an ”extreme disaster” that has left the whole region in a state of paralysis.

“Our tongues, our pens have been sealed,” he said.

The repeal of article 370 was justified by the Modi government on the grounds of bringing economic prosperity to the turbulent region, opening it up to outside investment, and eliminating Pakistan-supported militants.

Residents of Kashmir have since found themselves living in a region far more volatile, unstable and economically fragile than ever. The impact of the crackdown, in particular a six-month Internet shutdown, led to huge economic losses and unemployment, and cost the economy of Jammu and Kashmir an estimated US$5.3 billion — a situation only worsened by the COVID-19 lockdown that followed.

The Indian government did little to encourage economic prosperity other than to change strict domicile rules, which had previously barred non-locals from buying land and property in Kashmir, and investing in the region.

Non-Kashmiris have been granted residency in the territory since August last year. For Kashmiris, this move was proof that Modi’s real aim was to advance the Hindu-nationalist agenda of his BJP government, which wants to establish India as a Hindu rather than secular country, by shifting the demographics of the region away from being majority Muslim.

Sibtain, a 33-year-old from Srinagar, said he felt “maddened” at the very real prospect of becoming “a second-class citizen.”

“The worst fear I have is that Kashmir will lose its identity. We will just be subsumed into a much bigger Hindu India,” he said.

The security situation remains equally precarious, seeping into the lives of all the region’s residents, with civilians dying and houses being destroyed.

Rather than bringing calm to the region, a heavy security presence and a counter-insurgency campaign has led to frequent violent encounters between Indian troops and a new generation of Kashmiri militants.

According to human rights organisations, between Jan. 1 and June 20, there were 229 killings, of which 32 were civilians, 54 were government forces and 143 were militants, while 48 properties were destroyed.

“There is not a single house in the district which has not been searched and not a single village where the [counter-insurgency] operation may not have been launched,” a resident of Shopian district in eastern Kashmir said.

Despite being outnumbered, inexperienced and poorly armed, radicalized young militants have revived a dying insurgency.

Shakoor Farooqi was in his late teens when he disappeared without a trace last year. His father, shoe shop owner Farooq Ahmad, showed the last photograph taken of his youngest son.

Farooqi was killed in a gunfight in June, having refused the offer to surrender when he was cornered by Indian forces in a house in Srinagar, alongside two other militants. Ahmad was called by authorities to the scene to try and convince his son to surrender, but his desperately shouted pleas went unanswered.

“There were curtains drawn on the windows, and there was not a single whisper from there,” Ahmad said. “It was like a war on the border, there were so many policemen.”

Ahmad believes his son was “martyred.”

“A father goes through so much pain to raise his children. It is so unfortunate what happens here,” he said.

Repealing article 370 has also had security reverberations on a geopolitical level. Many believe that June’s incursions of Chinese troops into disputed territory in Ladakh, the Himalayan border region adjacent to Kashmir, were partly prompted as a retaliatory move in response to India taking full control of Kashmir.

Meanwhile, India-Pakistan relations have rarely been so fraught.

Sitting in his home in northern Kashmir’s Tilgam, a village known for producing generations of the region’s best poets, Tilgami said he would keep writing poetry that documented the despair still so potent in Kashmir, even though he has been repeatedly threatened with arrest by security agencies.

“The poetry is no longer about love,” Tilgami said. “It is about what one feels around, the helplessness, the chaos. There are dead everywhere.”