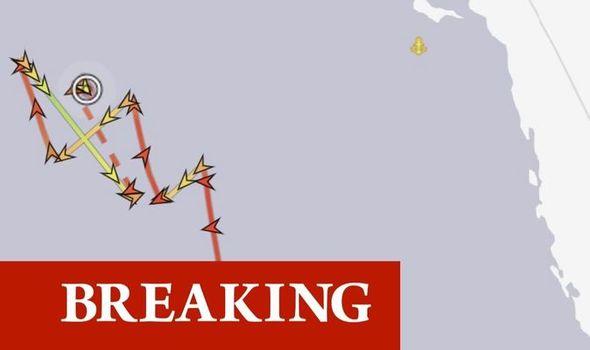 Dryad Global received “unconfirmed reports” that an oil tanker – which could be the NCC Dammam – was attacked, the maritime security group said on Twitter today. There is still no immediate confirmation from the Saudi authorities.

They tweeted: “For nearer three and a half hours the NCC DAMMAM has been showing the status of ‘Not Under Command’ on Marine Traffic.”

They confirmed the reports and said “investigations are ongoing”.

The term “vessel not under command” means a vessel that through some exceptional circumstance is unable to manoeuvre.

This means it is unable to keep out of the way of another vessel.

It is believed the vessel is owned by Saudia Arabia and was built in 2008.

One person on Twitter said the oil tanker “handles petroleum and chemical materials”.

According to Neptune P2P Group, the King Fahd Port are “transmitting a warning message” informing ships to be “vigilant”.

They wrote: “King Fahd Port control are transmitting a warning message on VHF CH 11 instructing ships to be vigilant and monitor the North and South entrance for suspicious small boat activity.

“It has been reported that an unidentified vessel may have suffered an explosion and black smoke has been spotted in the approaches to the South port entrance.

“The report of an explosion has yet to be confirmed by the port authorities but the sighting of black smoke has been verified by shipping awaiting entry to the port.”

Vessels have previously come under attack in Red Sea waters.

In December, Saudi Arabia said that a tanker anchored at Jeddah port was hit by an explosive-laden boat.

This followed a separate incident at another Saudi terminal on the Red Sea where a tanker was damaged by an explosion.

A Saudi Arabian-led military coalition engaged in Yemen has in the past foiled attempted assaults using explosive-laden boats it says are launched by Yemen’s Iran-aligned Houthi movement.

The Houthi movement is an Islamist political and armed movement that emerged from Sa’dah in northern Yemen in the 1990s.

Houthis have gained control of most of the northern part of Yemen’s territory.

Since 2015, they have been resisting the Saudi-led military intervention in Yemen that claims to seek to restore the internationally recognized Yemeni government to power.

The Islamic State militant group has attacked all of the conflict’s major parties including Houthis, Saleh forces, the Yemeni government, and the Saudi Arabian-led coalition forces.

The Houthis have launched repeated missile and drone attacks against Saudi cities, widely seen as a proxy war between Saudi Arabia and Iran.

By March last year, more than 7,000 people have been killed during the ongoing conflict, according to the UN, but it is believed the figure is much higher.

The US-based Armed Conflict Location and Event Data Project (ACLED) said in October 2019 that it had recorded more than 100,000 fatalities, including 12,000 civilians killed in direct attacks.

More than 23,000 fatalities were reported in 2019, making it the second most lethal year of the war so far.