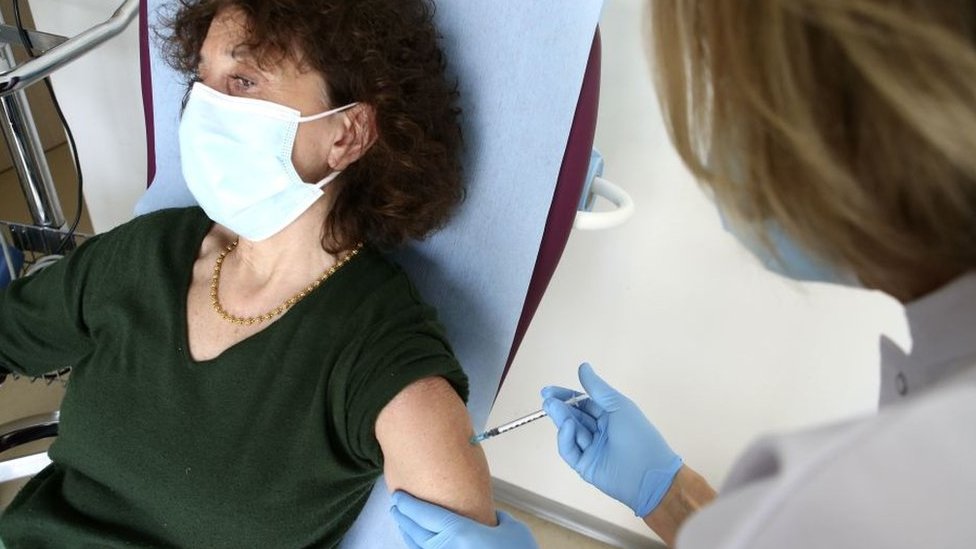 A nurse in Wales caught Covid three weeks after getting the vaccine, prompting warnings from experts that it takes time for immunity to build up.

The nurse, who has been working for the Hywel Dda University Health Board area, said that she contracted the virus while waiting for the second dose of the Pfizer-BioNtech jab. The woman, who did not wish to be identified, said she was ‘angry and heartbroken’ to have caught Covid at this stage. She said she was ‘initially relieved’ to have been offered an appointment and wanted to do the right thing for her family. ‘But it gives a false sense of security,’ she told the BBC.

The nurse said she was told it would take 10 days for the vaccine to offer some protection and reduce the risk of transmission, but three weeks later she began to feel unwell. She had ‘quite severe symptoms’ of a bad cough, high temperature and breathlessness and was ‘shocked’ when she tested positive. Deputy Chief Executive of Hywel Dda health board, Dr Philip Kloer, said that while a Covid vaccine ‘reduces your chance of suffering’ from the virus, no vaccine is ever 100% effective.

He added that some people may contract Covid-19 immediately before having the vaccine without knowing it, or in the week or two following vaccination as your body builds up protection. People who have had Covid vaccines are being warned to still take care. It comes amid concern about new guidance to delay second doses in order to prioritise giving as many people as possible the first dose. The original advice was that people would need the second dose of the Pfizer vaccine three weeks after the first injection. But that changed last month to 12 weeks between doses. The UK’s chief medical officers defended the move, saying the Pfizer jab gives ‘considerable protection’ after the first dose.

Margaret Keenan, 91, was the first person in the world to recieve the Pfizer jab (Picture:: PA)

But Pfizer said the jab’s efficacy was tested only when the two doses were given up to 21 days apart. Many health experts say there is a lack of evidence to back up the 12 week wait, which the British Medical Association branded ‘grossly unfair’. Meanwhile, The World Health Organisation does not recommend following the UK’s decision, saying booster jabs should only be delayed in ‘exceptional circumstances’. On Friday, the Welsh First Minister advised people receiving the vaccine to ‘continue to act in a precautionary way’. He said they should ‘recognise the new protection that they have’ but ‘recognise as well that for many weeks, and for some months ahead, coronavirus is going to continue to be a feature of all our lives’. Vaccination has been shown to prevent severe infection, so even if people do catch the virus, they would be protected from falling seriously ill. The UK now has three approved jabs with almost 1.5 million people vaccinated.