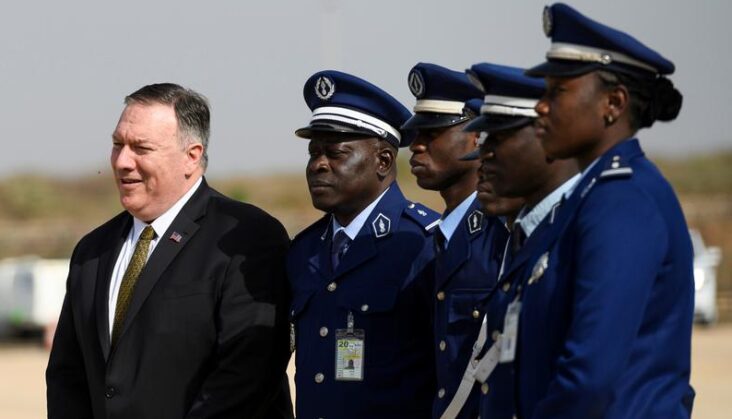 On his first-ever trip to Africa after nearly two years in office, U.S. Secretary of State Mike Pompeo will visit Senegal, Angola, and Ethiopia.

Against the backdrop of the recent inclusion of some African countries in the list of countries excluded from some immigrant visas, the Pentagon’s plan to pull troops from Africa, Trump cutting funds for African programs and the general lackluster US diplomatic engagement with the continent, there isn’t much to be excited about.

ABC News reports that Pompeo’s major themes will include promoting trade with the U.S., good governance and the rule of law, while also urging African officials and business leaders to eschew Chinese investment.

While it took almost two years for Secretary Pompeo to make his first trip to Africa, it surely won’t take that long for him to realize that countering China in Africa will require more than rhetoric.

What is not being said enough is that Trump’s unimpressive engagement with Africa – which has disappointed many – is actually how politics works: attention is proportional to strategic interests, at least in an ‘America First’ world.

Africa is of little strategic value to the U.S

Be it oil, gas or solid minerals; Africa has plenty, but it has lost the allure it once had.

Thanks to the shale revolution, the United States has gone from the world’s biggest importer of crude oil to a net energy exporter. The handful of African countries like Somalia, Djibouti, Eritrea, and Egypt that are located along sea lanes key to global trade either host a U.S. military base or have one nearby.

Of the various Islamic militant groups operating in the Sahel region and Somalia, only Al Shabaab operating in Somalia and Kenya poses a direct threat to U.S. civilians and military personnel.

As a result, there is no incentive for Washington to maintain a sizable force in West Africa to combat terrorism, especially since the Pentagon shifted its prime focus from counterterrorism to competing with China and Russia is the most contested geopolitical theatres

Africa is not the Asia-Pacific but that is not to say that the U.S. does not care about what goes on in Africa, a continent of 55 countries with a burgeoning population that is projected to reach 2.4 billion by mid-century.

The vast majority of Africans are underserved by traditional financial institutions, combined with the ubiquity of mobile phones, the potential in fintech is huge and has been described by the IMF as a potential game-changer.

And as it stands, Chinese companies aren’t just getting the ink for infrastructure and mining deals, they’re laying the foundation to capture big fintech markets like Nigeria, something Silicon Valley companies have also cottoned on to.

Why Senegal, Angola, and Ethiopia?

According to Pompeo, Senegal, Angola and Ethiopia are “three countries in various stages of development in their transition to democracy and their stability.”

While Pompeo’s visit won’t solely be about campaigning against Huawei and China, he won’t miss the opportunity to impugn China-Africa relations, particularly China’s relationship with the countries he is visiting.

It would be disingenuous for anyone to assert that Africans are not concerned about their indebtedness to China; when Pompeo makes the ‘debt-trap diplomacy’ accusations against China, he will be speaking the mind of some parties, particularly in Angola and Ethiopia.

But for the overwhelming number of African leaders and policy analysts, the call to close Africa’s infrastructure deficit is too deafening for its leaders to pay heed to criticism of Africa’s indebtedness to China; especially when the critique doesn’t offer a viable alternative.

With the combination of criticisms of China coming from Africans and the U.S. diplomatic clout, a viable alternative won’t be a hard sell; especially in places like Angola where the Resource-for-Infrastructure financing model between Angola and China got its bad name.

The impact of the “Angola Model” as it is now being called, is still being felt in Angola to date, so it is not surprising that João Lourençio, the President of Angola, hasn’t displayed the same appetite for Chinese loans deals like his predecessor.

It is expected that Pompeo will take that same energy to Ethiopia, whose charismatic Prime Minister Abiy Ahmed has won the hearts of many with democratic and economic reforms, as well ending the stalemate between Ethiopia and Eritrea in a peace deal that earned him the 2019 Nobel Peace prize.

Abiy’s economic reforms which include privatization of state assets fit into the U.S. goal to double two-way trade and investment between the US and Africa by expanding private sector engagements between the US and African countries. Which was made clear during the visit of US Deputy Secretary of Commerce Karen Dunn Kelly and USAID Administrator Mark Green to Maputo where they expanded on the Prosper Africa initiative earlier announced by John Bolton.

The Prosper Africa initiative allowed the Trump administration to check the box of having an Africa Policy. But between the U.S. and Africa, it is difficult to point out who needs an alternative to Chinese funding more: African countries that would rather not be reliant on China, or the US who sees Africa’s debt to China as Chinese leverage over Africa.

Regardless, Trump’s lackluster Africa Policy combined with the Trump administration’s obsession with China, this trip is likely to be more about countering China with words, than a turnaround moment for U.S. policy engagement in Africa. Therefore, it would come as a huge surprise if Pompeo completes his visit without uttering the word China.

Nonetheless, the resource-rich continent with its swelling population means U.S. private sector activity will remain vibrant and Pompeo’s visit can help lubricate the way for U.S. investors eyeing countries like Ethiopia and Angola, where economic reforms are presenting new opportunities.

Africa will prove to be a challenging place to counter China; not necessarily because of China’s influence, but because so far, the Trump administration has spent more time muddying the water with lectures to make up for a weak policy.

This article first appeared on The China Africa Project

is a geopolitical analyst based in Abuja, Nigeria. His work focuses on the interplay of geopolitics and security in international relations. He analyzes, advises and reports on the strategic, systemic, ethical, and practical dimensions of the issues and events that have shaped and continue to shape international security and security diplomacy. You can read his works at Ventures Africa. If you’d like to hire, commission, cast, solicit advise, correct, or just get in touch with Ovigwe, please email: ovigwe.oa@gmail.com

How to control people