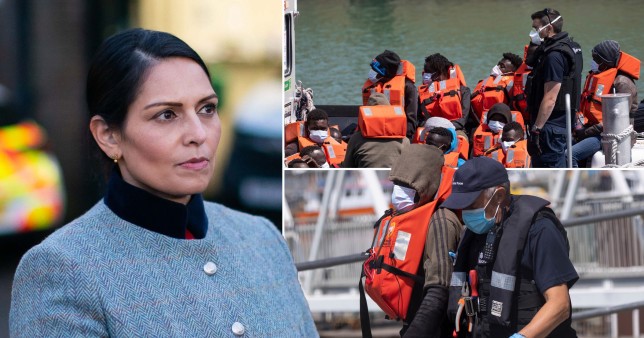 After offshore capital (and manufacturing), now we have offshore migrants. Next week, the British Home Secretary Priti Patel will unleash what is meant to be the coup de grace (if not simply a backstab) against the persistent and growing number of landing attempts across the English Channel: a bill that will allow for asylum seekers to be detained in reception centers outside the country while the UK considers their applications. This comes after the recent back-and-forth with Denmark—which passed a similar law a month ago—over the opening of detention centers in Africa.

The law is called the Nationality and Borders Bill, and has the distinction of granting the same requests that are being made by Alternative für Deutschland, the German post-Nazis. It was against their not-so-distant forebears that the heroic United Kingdom fought in the name of “freedom” (apparently of every kind except freedom of movement).

The migrants’ final destination is inevitably Africa, not only because many migrants come from there (“We are here because you were there” is the slogan that perfectly summarizes the migration phenomenon), but also because the plans for building such centers in offshore UK territories such as Gibraltar, and above all the Isle of Man, until now reserved for tax evasion and offshore accounts, were met with a very pragmatic and highly unpatriotic rejection. Capital: yes; migrants: no, said the locals.

It is therefore necessary to find alternative solutions elsewhere. Perhaps in places like Rwanda. A month ago, none other than the highly civilized Danes—a social-democratic Eden envied by the entire non-fascist Western world—resigned themselves to dumping there the surplus labor force coming in, to whom they would otherwise have to grant the privileges of the welfare state. This jarring agreement in views between the Scandinavian social democrats and the British neo-nationalists shows the definitively post-political aspect of the western management of the migration problem, which tends not only towards decentralization, but also towards the complete privatization of detention centers, as has already happened for decades in the U.S. penitentiary sector, to cite just one example. A process which, left undisturbed, points straight towards a world of gated communities, “districts” of predominantly white wealth defended by mercenary vigilantes and surrounded by concentration-camp-like areas.

Needless to say, the “cosmopolitan” Prime Minister Johnson supports the new law. During the last weekend, 315 migrants crossed the Channel, bringing the annual total to 5,676: the merest blip compared to the number of landings and entries into Europe, yet intolerable nonetheless. Patel herself  is adopting a “pragmatic” and all-inclusive model already patented by her Australian counterparts, who have been practicing these measures for some time now, stranding all those who risk their lives at sea to get to Australia in the name of a future at least vaguely worthy of the name in places like Papua New Guinea (and here one might also recall that the Australians themselves are descended from British outcasts—whether poor or classed as deviant—deported by London to the Aboriginal continent to boost its development).

Of course, no one could slam the door on migration more thoroughly than someone who is a daughter of migrants herself. Patel comes from a family of Indian shopkeepers who moved to Kampala, Uganda, in one of the myriad stories of migration, voluntary or otherwise, typical of the British Empire that was reduced to a commonwealth after the Second World War. Furthermore, this law goes hand in hand with the recent government decision to cut humanitarian foreign aid, and is a counterpoint to the proposal, announced on Wednesday, to exempt businessmen arriving in the UK from having to quarantine against COVID as long as their trip “is likely to have a significant economic benefit for the UK.”