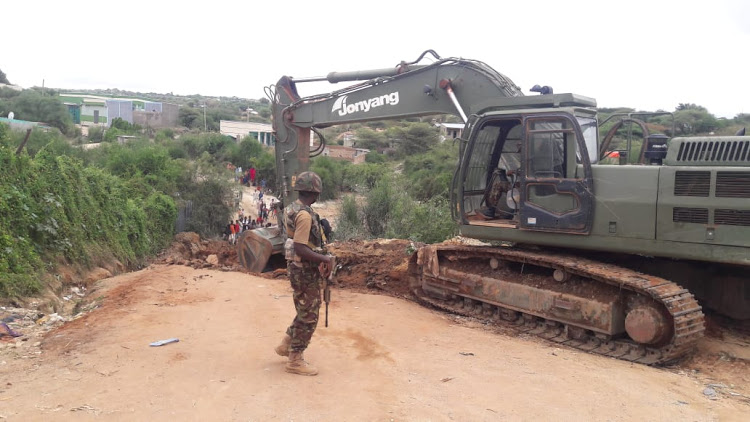 The Kenya Defence Forces (KDF) have dug a trench and filled it with a razor wire at the main border with Ethiopia in Moyale in an effort to tame smuggling in the area.

The areas the army are digging trenches are the ones used by smugglers to bring in foreigners, contraband goods and drugs, officials said.

Trenches stretching more than ten kilometers have been dug in Sessi, Kore, Foundation, and Biashara in the area.

The military had in May said sealing off the illegal entry points will assist keep off smugglers who conduct illicit trade along the Kenya – Ethiopia border.

Speaking at an event to officially handover the security project to the Marsabit County Security Team on Monday, Secretary Internal Security (SIS) Mr Wilson Njega, said that the project was a step in the right direction towards securing our borders.

“The long-term goal is to safeguard our borders. To achieve this, we have to continue identifying and sealing off all illegal channels so that we can enable legitimate cross-border trade,” he said.

He added that there are considerations to extend the trenches for a further 50 kilometers on either side of the Point of Entry (PoE) to curb emergence of other routes and replicate the security project in other PoEs that have been experiencing similar challenges.

“We promise that this is not the end. The National Government plans to continuously engage the County security team and the border management committee here in Moyale to find solutions to problems, immediately they arise,” he said.

The sealed routes had been a constant bane for security organs and border personnel at the Moyale One Stop Border Post (OSBP). Not only did the routes contribute to economic and security threats, but had also been serving as conduits for human and drug trafficking, illegitimate trade and terrorism activities.

The illegal channels had also been enabling the proliferation of small arms and light weapons into Kenya and endangered wildlife through trade in game meat and trophies.

Kenya shares an 800-kilometre border with Ethiopia to the north. The Moyale OSBP – constructed in 2017 – is the only gazetted PoE along this border. So far, Kenya has 35 PoEs which include land, air and sea borders.

The decision to seal off the illegal routes was made by the Border Control and Operations Coordination Committee (BCOCC) which is chaired by Interior Principal Secretary Karanja Kibicho.

“This handover is a continuous process. As we continue implementing these changes, we shall also continue engaging the Ethiopian Government through the Ministries of Trade and Foreign Affais,” Njega said.

The committee had held an extraordinary session in Moyale in October 2019 to discuss challenges facing the Moyale OSBP. One of the proposal was the unanimous agreement to engage KDF to dig the trenches as this would serve to safeguard

Kenya’s interests and facilitate legitimate trade between Kenya and her neighbor Ethiopia.

Mr Njenga commended the multi-agency effort on the security project and the speedy intervention of the KDF in sealing off the illicit routes. He praised the move

and said that among others, it will act as a deterrent measure geared towards legitimizing all cross-border transactions.

He added local security committee will ensure sustainability of the project in an effort to operationalize the OSBP adding the project should be monitored and protected from any form of destruction and vandalism with fortnight reports explaining its status.

KRA was tasked to continue monitoring trade volumes and any forms of illegitimate businesses.