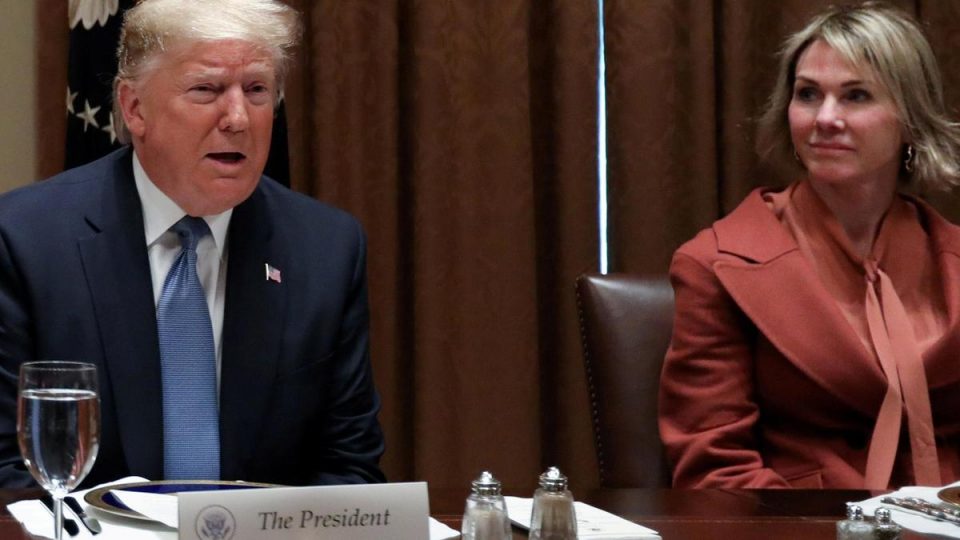 Kelly Craft, the US Ambassador to the United Nations, on Friday said she was determined to restore credibility to the UN Security Council this month, arguing that 2019 had been damaging.

Ms Craft’s remarks came during her first press conference since taking up the job in New York three months ago, following a rocky confirmation process in Washington where several senators questioned her suitability for the role.

The US holds the presidency of the council in December but the 15-member body is deeply split on major issues such as Syria, North Korea, Iran and Venezuela at a time when the White House has been deeply critical of the UN and Nato.

US President Donald Trump hosted council ambassadors for lunch on Thursday, ahead of two weeks of meetings at UN headquarters that Ms Craft will chair.

Among items affecting the Middle East, discussions about humanitarian aid corridors in Syria will take place on December 19, with talks about the political situation coming a day later.

“There is no issue to me that has proven more damaging to the council’s credibility than the conflict in Syria,” Ms Craft said.

“Over the next 12 months the council’s best efforts should be directed toward keeping the entry points through which the humanitarian aid is delivered.”

Referring to the UN-brokered Constitutional Committee on Syria, however, Ms Craft was more measured, describing it as “a notable step… under the careful and committed leadership of special envoy Geir Pedersen”.

But elsewhere progress on international peace and security had fallen short, according to Ms Craft.

“I am going to incorporate realistic assessments of the past 11 months,” she said, mentioning UN peacekeeping missions and ongoing efforts for a political breakthrough in South Sudan.

Having visited the country in October, council members held talks with President Salva Kiir and his former deputy, Riek Machar, leader of the Sudan People’s Liberation Movement In-Opposition. Their rival forces began fighting in 2014, three years after South Sudan gained independence. Although a ceasefire has since reduced violence hundreds of thousands have been displaced.

A deadline for a unified transitional government was missed last month. The council will discuss South Sudan on December 17.

“Being there first hand I can tell you it is a political mess and a humanitarian crisis,” Ms Craft said, vowing to keep up pressure on the country’s politicians.

“I actually couldn’t believe what I saw. It is inexcusable. The fact that the Security Council landed in South Sudan gave so much hope to the people that are suffering.”

Referring to other matters Ms Craft was again critical of the council, saying members routinely treated Israel as “a punching bag” and she blamed Iran for continuing to supply weapons to Houthi rebels in Yemen.

Iran’s ballistic missiles and potential for nuclear-capable warheads will be discussed on December 19, almost one year to the day that US Secretary of State Mike Pompeo addressed the council on the same issue.

“There are too many times when the council just repeats conversations without taking concrete steps forward,” Ms Craft said.

“This is why we are going to focus on a more credible council this month because we do face a credibility problem in the eyes of the world when we’re talking without acting, but at the same time, we argue that we are essential to global peace.

“We have to prove that by our actions within the council.”

Despite several questions about North Korea and what European countries say are breaches of UN resolutions by Pyongyang, Ms Craft did not go beyond stating that the US was concerned by recent short-range missile and rocket tests ordered by Kim Jong-un.

The North Korean leader has warned of ending diplomacy with the US if the Trump administration does not make concessions by the end of December.

Ms Craft will host members of the council in her home state of Kentucky next weekend.

Richard Gowan, UN director at the International Crisis Group, said the irony of the US ambassador’s comments on Friday was that “many foreign diplomats would argue that the greatest threat to the council’s credibility is America’s refusal to negotiate seriously at the UN over Iran or Venezuela”.

“Washington has been dismissive of the UN for much of this year,” Mr Gowan said. “If it wants the council to regain credibility it needs to persuade other powers it takes the UN seriously again.”