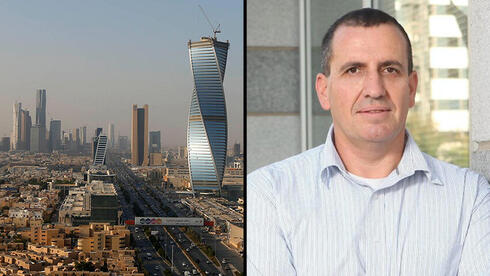 As Eyal Waldman, chairman of Waldo Holdings, returns from 4-day visit to Gulf kingdom, he says Saudi hosts keen to begin cooperating with Israeli businesses ahead of 2030, when oil revenues no longer main source of income

Attila Somfalvi |
A high-profile Israeli entrepreneur says there is an “incredible potential” for business opportunities with Saudi Arabia.
Eyal Waldman – chairman of Waldo Holdings and founder and former CEO of Mellanox Technologies – returned from a four-day trip to Saudi Arabia on Sunday morning, visiting Jeddah and Riyadh.
“I return excited from an eventful trip,” he told Ynet. “Crown Prince Mohammed bin Salman is advancing far-reaching policy changes in a short time, and transforming Saudi Arabia for the better. There is construction everywhere,” he said.
Although he entered Saudi Arabia with a non-Israeli passport, he said his identity was well known to his hosts, who included officials from the government as well as members of the business community.
Waldman said he believed there is a hope that the visit of U.S. President Joe Biden next month would yield substantial advances in Israel-Saudi ties. “Perhaps we will achieve the normalization we are all expecting,” he said.
“The visit could advance peace or an agreement with the Palestinians,” he said. “A major part of the Arab world is present in Saudi Arabia, and if the Americans and the kingdom advance their relations, the road would open for normalization with Israel,” he said.
He believes the Saudis are looking ahead at 2030, when oil will not be such a revenue earner, and are looking for opportunities to cooperate with Israel – especially in the technological fields.
At 36, Mohammed bin Salman (MBS) is leading a whole kingdom of one of the most influential counties in the Middle East and in the world. Although he is still regarded as the crown prince, the second most important position after the king, the medical state of his father requires him to fulfill both positions.
In April 2016, he introduced his ambitious plan called “Saudi Vision 2030,” which aims to reduce Saudi Arabia’s dependence on oil, diversify its economy, and develop public service sectors such as health, education, infrastructure, recreation, and tourism.
However, the his apparent involvement in the killing of journalist Jamal Khashoggi in October 2018 has taken a toll on his reputation, ignited harsh condemnation from the West, and even personally from Biden.
Saudi Arabia seems to be warming up to Israeli ties recently. In an interview with The U.S.-based Atlantic magazine, MBS said he recognized Israel’s right to exist, and did not rule out potential diplomatic relations in the future.