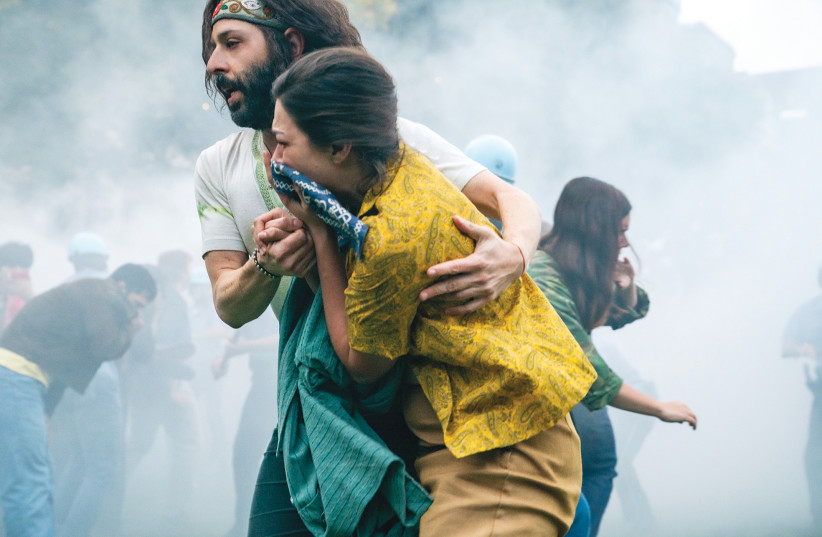 Shi’ite Muslim clerics arrive for a mass funeral for victims of a suicide attack on a mosque, in Qatif, east Saudi Arabia, May 25, 2015 – (photo credit: REUTERS/STRINGER)

How likely is it that followers of the Islamic State (ISIS) will heed its call on social media for attacks on Saudi oil pipelines and other infrastructure after the kingdom allowed planes en route to and from Israel to cross its territory?

The cryptic audio message on the Telegram messaging platform earlier this month called for retaliation for Saudi support for the United Arab Emirates’ and Bahrain’s normalization of ties with Israel.

While Middle East experts do not have a crystal ball, they are skeptical that this appeal will lead to something bigger.

“ISIS is ‘whistling in the dark.’ They have lost their equipment and the services of their formerly numerous volunteers,” Dr. Oded Eran, a senior researcher at the Institute for National Security Studies in Tel Aviv, told The Media Line.

He was referring to the war against Islamic State, in which it lost its last swathe of territory, in the Syrian town of Baghouz. In March 2019.

Brian G. Williams, an Islamic history professor at the University of Massachusetts, Dartmouth, told The Media Line: “They have gone underground, operating a shadow war.”

“We [US and allied forces] didn’t wipe them out, even though they are much diminished by the war and most fighters did not come home,” Williams said.

Eran, a former Israeli ambassador to Jordan and the European Union, said that “ISIS has lost not only its glamor but also most of its military might.”

Williams concurred, “ISIS’s grandiose claims have been delegitimized and the glory and allure diminished.”

“We are witnessing activity of remnants of an [ISIS] empire while on the other hand, they [ISIS] are banking on the strength of some Muslim tribes in northern Saudi Arabia close to the area in Iraq where the Islamic State existed,” Eran said.

The Islamic State caliphate existed from about 2014 to 2019.

The former ambassador said he is not convinced that the northern tribes will heed ISIS’s appeal.

“It is very doubtful that they will get any support from the clans and that this call will be met with a positive response. Even during the height of the prestige and expansion of ISIS, there were no signs of support in the north of the Kingdom of Saudi Arabia,” said Eran.

In any case, “the Saudi security services are well-prepared and very aware of the dangers and threats from this region.”

“ISIS is weak, to say the least. They have suffered a massive disruption wave,” said Dr. Kamran Bokhari, director for analytical development at the Center for Global Policy, a US-based think tank concerned with the intersection of US foreign policy interests and Muslim states and societies.

“We measure them via activity. We measure the health of terror groups through attacks. And if there are no terror attacks, we can’t measure,” Bokhari told The Media Line.

Prof. Joshua Teitelbaum, a specialist on Saudi Arabia and the modern Middle East at Bar Ilan University outside of Tel Aviv, told The Media Line that “ISIS is diminished but not extinguished.”

The organization is “severely weakened, lost their territorial base and is not exactly in the prime of life. They have taken lots of beatings.”

Yet, ISIS cannot be written off, Teitelbaum said.

“They are capable of attack[s] in the Kingdom of Saudi Arabia. In past years, there have been bombings and shootings in the kingdom, not regime threatening, but they can be regarded as dangerous,” he said.

No one is counting the terror group out of the picture.

“They can still construct chaos,” Williams said. “They hold a binary – black or white – version of life in the Middle East,” he added. “If you are not with us, you are against us, is normal, and this should worry the Saudis.”

Bokhari said: “Insurgents blend in with the countryside. When it is convenient for them to come back another day, they will.”

Today, they “engage as information operators. They are not done operating like an insurgent group. They know how to talk to their audiences. This message is a ‘place holder’ until they resume their operational capabilities,” he said.

ISIS is “reassessing their resources, assessing the landscape for their operations and seeing an opportunity in Saudi Arabia, though they haven’t seen success there.”

Economic and social reforms in Saudi Arabia are changing the status quo and may also inspire attacks.

“Crown Prince Mohammed bin Salman (MBS) is pushing against extremism, and not necessarily against ISIS people, and that is creating a lot of frustrated people,” Bokhari said.

For Roby Barrett, a Middle East scholar at Washington, DC’s Middle East Institute think tank, “MBS, by trying to reform the state, is causing fractures inside the royal family and introducing elements of instability through the kingdom.”

“It is difficult to tell if MBS faces serious internal threats or merely feels threatened,” Barrett, who has extensive experience with US Special Operations and intelligence agencies, told The Media Line.

“This is an important distinction because if the threats are real, then his role in the death of [Jamal] Khashoggi, the imprisoning of his political rivals, the Qatari embargo, the war in Yemen and other actions could be viewed as brutally rational ‘realpolitik.’” Khashoggi, a critic of MBS, was killed in the Saudi Consulate in Istanbul.