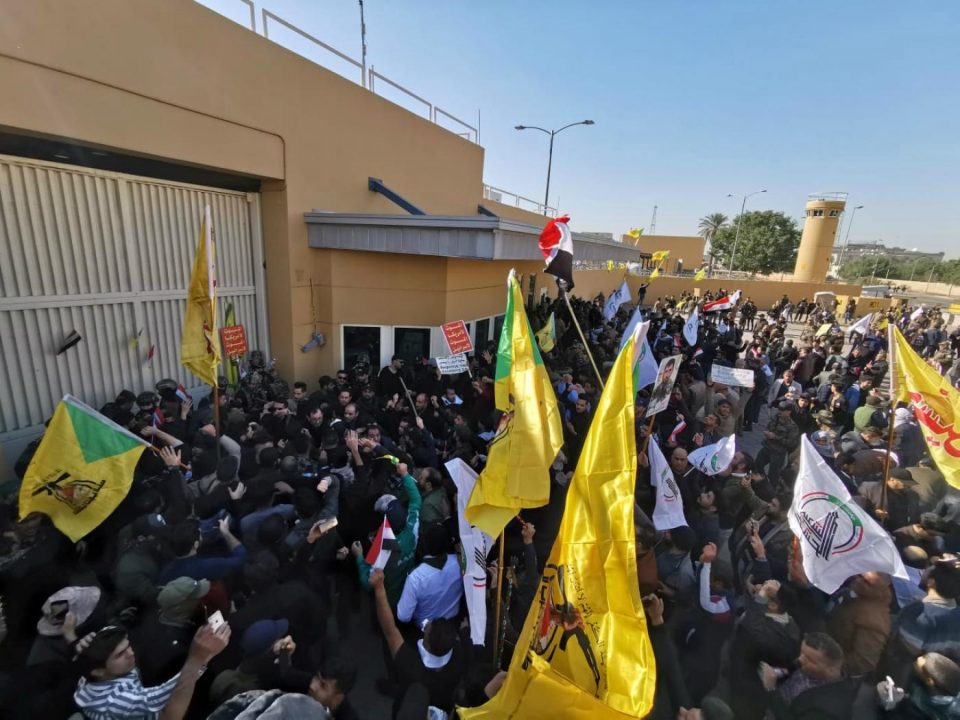 Thousands of protesters attacked the US embassy in the Iraqi capital on Tuesday in anger at American air strikes in Iraq and Syria that killed more than two dozen Iran-backed militia fighters at the weekend.

The demonstrators marched through checkpoints that usually restrict access to Baghdad’s high-security Green Zone, chanting “Death to America”, burning US flags and and holding posters calling for the embassy to be shut down.

They pulled security cameras off the wall as Iraqi security forces tried to keep them back, the AFP news agency reported. The US ambassador and other staff have been evacuated from the embassy, two Iraqi foreign ministry officials told the Reuters news agency on Tuesday.

The ambassador and staff left out of security concerns, they said. One official said a few embassy protection staff remained.

US forces carried out air strikes on Sunday against the Kataib Hezbollah (KH) militia in response to the killing of a US civilian contractor in a rocket attack on an Iraqi military base in Kirkuk on Friday.

The strikes risk drawing Iraq further into a proxy conflict between the US and Iran at a time when it is being rocked by mass protests against the political system.

Some protesters threw stones at the gate of the embassy while others chanted, “No, no, America! … No, no, Trump!” Iraqi special forces were deployed around the main gate to prevent them entering the embassy.

Qais al-Khazali, leader of the Iranian-backed Asaib Ahl al-Haq militia, and many other senior militia leaders were among the protesters.

KH flags were hung on the fence surrounding the building.

Iraqis are taking to the streets in their thousands almost daily to condemn, among other things, militias such as KH and their Iranian patrons that support Iraqi Prime Minister Adel Abdul Mahdi’s government.

Abdul Mahdi, who is leaving his post, condemned the strikes, which killed at least 25 fighters and wounded 55.

Turkey: War with Greece ‘just a matter of time’