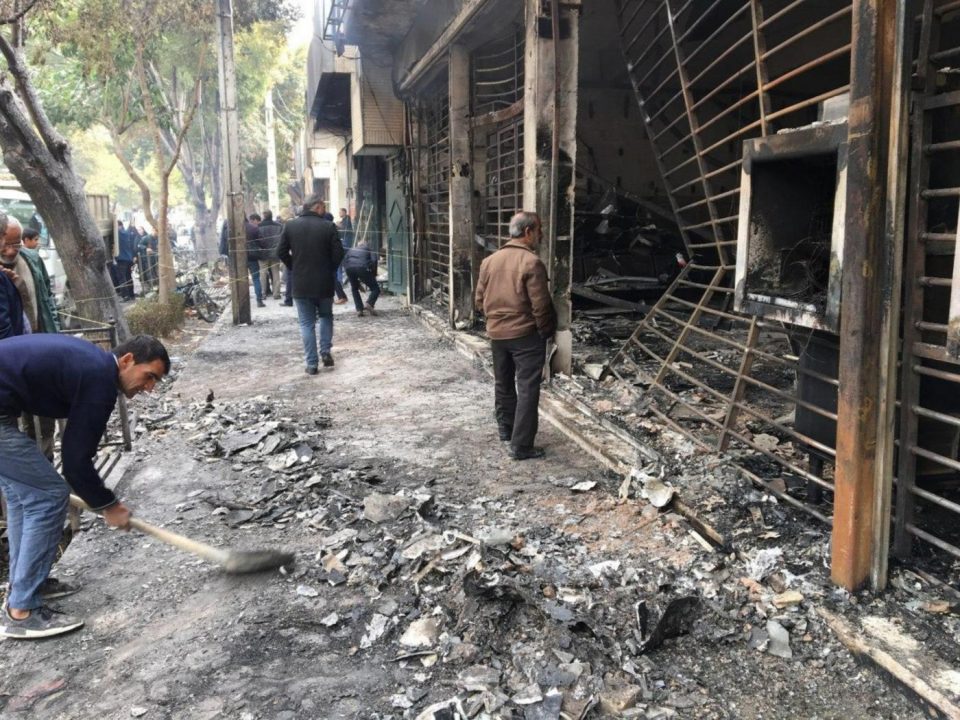 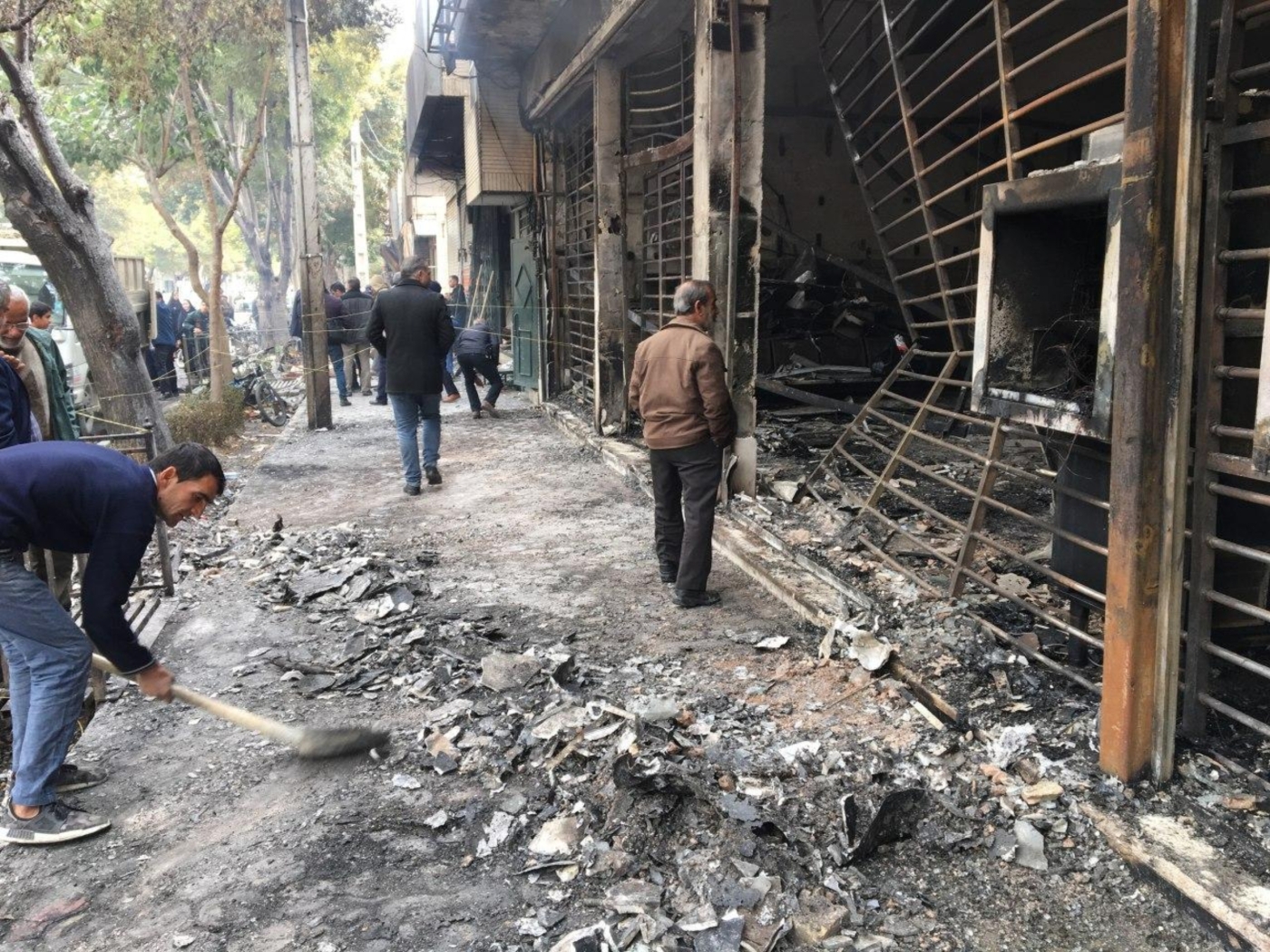 Iranians walk past a charred building set ablaze by protesters during a demonstration against a hike in petrol prices. (AFP)

Hardline clerics and conservatives, who have the full support of Iran’s Supreme Leader Ayatollah Ali Khamenei, have threatened President Hassan Rouhani with impeachment and death over alleged secret talks with Israel.

On 4 November, young clerics held up banners with death threats directed at Rouhani during a pro-government rally in the religious city of Qom.

Some of the signs said the president’s fate would be sealed in Farah Pool – a pool in which former president Akbar Hashemi Rafsanjani was found dead in 2017.

Last week, an officer from the Islamic Revolutionary Guard Corps (IRGC) threatened the president with trial for treason.

In a speech at Ardebil Azad University, IRGC officer and head of its thinktank, the Centre for Borderless Security Doctrinal Analysis, Hassan Abassi accused Rouhani of taking part in secret negotiations with Israel, as well as following the Neo-Keynesian economic school of thought.

“No matter how hard you try to escape, one day you will be tried in the Islamic Republic for holding talks with Israel,” Abbasi said. “I assure you, as long as I am alive, I will not let you escape [punishment for] negotiating with Israelis.”

However, no evidence that secret talks have indeed taken place has been made public.

Conservatives in parliament joined anti-Rouhani forces, following last week’s hike in petrol prices that led to deadly clashes between the police and demonstrators in several cities.

On Sunday, hardline clergy member and legislator Mojtaba Zolnour was collecting lawmakers’ signatures for Rouhani’s impeachment based on charges such as “spreading divisive speech, carrying out dull economic policies, being incompetent in managing the country”, and causing a sharp fall in the value of the country’s currency.

According to ILNA news agency, 50 lawmakers have signed the impeachment petition, which needs at least 90 signatures to be presented in parliament.

Environmentalists sentenced to prison for espionage

A court in Iran has sentenced a group of six environmental activists, who have been under temporary arrest since January 2018, to prison terms of six to 10 years on Wednesday.

The orders issued by a lower court convicted the activists for “espionage under the cover of environmental activities”.

According to ISNA news agency, Niloufar Bayani and Morad Tahbaz were sentenced to 10 years, Taher Ghadirian and Houman Jokar to eight years, and Amirhossein Khaleghi and Sepideh Kashani to six years in prison.

The sentences for two others in the group, Sam Rajabi and Abdolreza Kouhpayeh, will be announced next week.

The activists have 20 days to appeal the decision.

Kavous Seyed Emami, another environmentalist who was arrested with the group, died in prison a month after his arrest.

Prison authorities claimed that he committed suicide – however his family has called for an independent investigation into his death.

President Rouhani’s administration has announced that it will earn $116m per year by its recent move to increase fuel prices, that have resulted in widespread demonstrations across the country and at least 100 deaths.

“If we reduce our daily fuel consumption by 10 million litres, and sell it in the Persian Gulf, then we can annually save 14,000 billion rial (about $116m),” Mohammad Ali Dehghan a deputy to the Iranian economy minister was quoted by ISNA news agency.

Since the reimposition of US sanctions in 2018, the Iranian economy has suffered greatly and the Iranian rial has lost 70 percent of its value.

Despite the current increase in fuel prices, Iran is still one of the cheapest places in the world to buy petrol and diesel. The current price of petrol is 30,000 Iranian rial (about $0.20) per litre.

Former president Mahmoud Ahmadinejad is mobilising supporters to help him back into power either through the 2020 parliamentary elections or the 2021 presidential elections.

Analysts speculate that the current economic crisis in Iran coupled with hostile US policies could pave the way for Ahmadinejad to renew his presence in the main circle of power.

“Ahmadinejad and his circle need a political organisation through which they can enter the parliamentary and presidential elections,” Hamdely daily wrote. “And there is no choice for them better than Jebhe Paidari.”

Jebhe Paidari, or Front of Islamic Revolution Stability, is a conservative organisation that supported Ahmadinejad during his 2005-13 presidential term.

The daily also stated that in recent weeks, politicians close to Ahmadinejad have started campaigning for the March 2020 parliamentary elections.

Meanwhile, the Donya-e Eqtesad daily reported that members of Ahmadinejad’s inner circle have been attempting to convince the Guardian Council of the Constitution – the county’s main vetting organisation – to permit him to enter the 2021 race.

In 2017 presidential elections the Guardian Council disqualified Ahmadinejad to run again for president.

* Iranian press review is a digest of reports that are not independently verified as accurate by Middle East Eye.