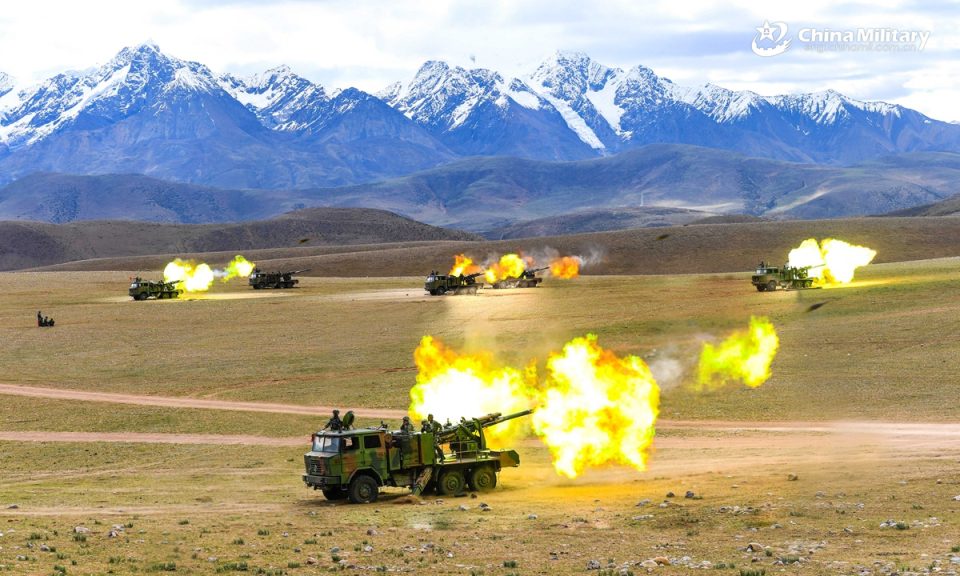 Truck howitzers attached to a brigade under the PLA Xizang Military Command fire a salvo of shells at mock targets during a coordinated exercise recently.Photo:China Military
By Yang Sheng and Liu Xuanzun Source:Global Times Published: 2020/6/21 21:48:40
324

After the border clash in the Galwan Valley, nationalism and hostility against China within India are rising sharply, while Chinese analysts and some reasonable voices inside India warned that New Delhi should cool down the nationalism at home.

India will be more humiliated than after the 1962 border conflict with China if it cannot control anti-China sentiment at home and has a new military conflict with its biggest neighbor, analysts said on Sunday.

Indian Prime Minister Narendra Modi said Friday that his government has given the armed forces full freedom to take any necessary action, and he also appeared to downplay the clash that killed 20 Indian soldiers and injured more than 70 on the Chinese side of the Line of Actual Control in the Galwan Valley on Monday.

“Nobody has intruded into our border, neither is anybody there now, nor have our posts been captured,” Modi said, referring to Ladakh’s Galwan Valley, Reuters reported.

Chinese observers said Modi is trying to respond to the nationalists and hardliners with tough talk, but he understands his country cannot have further conflict with China so he is also making an effort to cool tensions.

Lin Minwang, a professor at Fudan University’s Center for South Asian Studies in Shanghai, told the Global Times on Sunday that Modi’s remarks will be very helpful to ease the tensions, because as the prime minister of India, he has removed the moral basis for hardliners to further accuse China.

Beijing-based military expert Wei Dongxu told the Global Times on Sunday that Modi’s assertion that Indian forces can take all necessary steps is a show of strength for domestic audiences to appease the Indian masses and boost the Indian troops’ morale.

Modi is playing with words in order to avoid an escalation as he does not want to really unleash his army by encouraging them to actively start another clash. China’s capability not only in terms of the military, but also overall and international influence, is superior to India’s, Wei said. 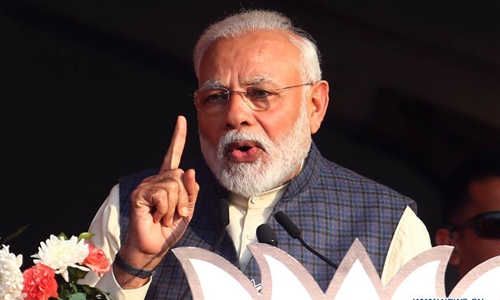 “It is normal to see heated nationalism in India, but we don’t need to worry whether nationalism will hijack the policymaking of India to further provoke China. When India is in conflict with Pakistan or other neighbors, nationalism might drive New Delhi to take actual operations, but when it comes to China, it is a different story,” Lin said.

Indian government and military leaders understand how powerful China is, while Indian nationalists are ignorant and arrogant, Lin said. “So they might say some harsh words, but they dare not take the first shot against us.”

“If 20 were martyred on our [Indian] side, then there would have been at least double the casualties on their [China] side,” V.K.Singh, India’s minister for roads and transport, told TV News24 in an interview broadcast late on Saturday.

Chinese experts said the official wants to placate the nationalists by making speculations to satisfy the hardliners. They do not want to put more pressure on the government to further provoke China, and the reason why China did not release the number is that China also wants to avoid an escalation, because if China’s casualties number less than 20, the Indian government would again come under pressure.

For now, India should focus on its own epidemic and economic problems, Wei said, noting that having frictions with neighbors will do India no good, as the accumulation of negative factors will damage India even more.

China is being very restrained in its efforts to avoid conflict, but this does not mean China is afraid of provocation or aggression from any country, especially India. Chinese military observers said that an escalated, large-scale military conflict involving main Chinese troops, if that were to happen, would mean a rout just like the war in 1962, with very disproportionate casualty figures unfavorable to India.

Because the Chinese military has an informationized combat system that integrates all troops, weapons and equipment together, while also having very disciplined troops and officers with advanced tactical awareness, they noted.

China’s priority for using military force is never in the West against India but in the East, such as reunification with Taiwan, so China’s deployment in the border region is less than the Indian side, Lin said.

However, if conflict breaks out, China’s overwhelming advantages on transportation and military industry will help the People’s Liberation Army to acquire an absolute strategic and tactical advantage against the India on the frontline.

“This is why India hasn’t dared to launch a full attack against the PLA in decades but keeps creating low-level tensions occasionally,” he noted.

Indian forces use weapons bought from different countries which many not coordinate with each other well, not to mention their undisciplined troops who can blow up their own submarine in a dockyard and shoot down a friendly helicopter, observers noted.

Indian economist Swaminathan Aiyar said in a Saturday report by Indian media outlet the Economic Times that the gap between China and India militarily and economically is five times bigger than it was in 1962. Attempting military adventures in that area is asking to be thrashed again and humiliated on a scale five times bigger than in 1962.

In a potential self-defense counterattack, China will secure its own territory and not likely claim Indian territory after emerging victorious, but the battle will deeply hurt India so much that global position and economy would go backwards to decades ago, Chinese analysts said.