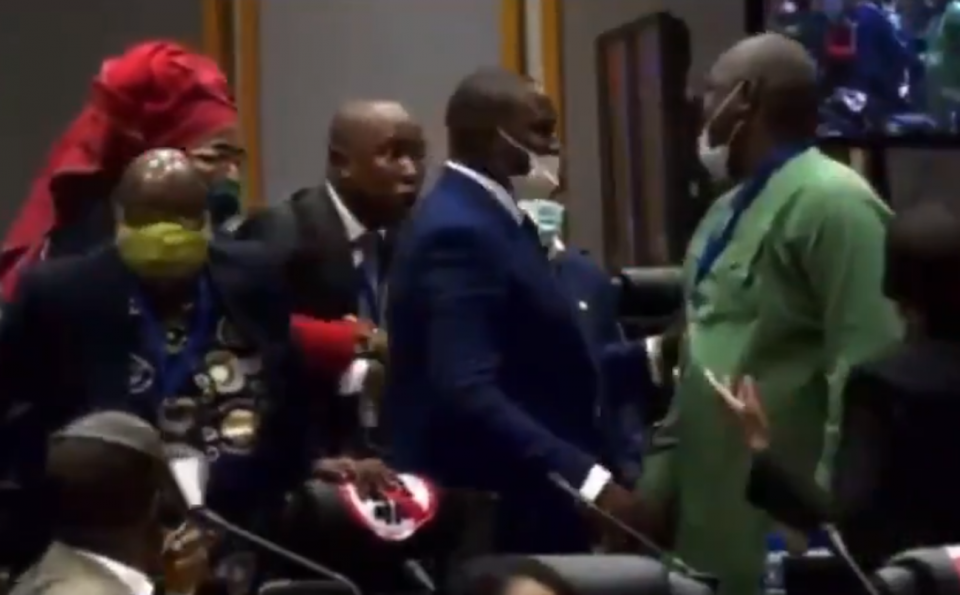 Malian lawmaker threatens to kill fellow member of Pan-African Parliament
Economic Freedom Fighters leader Julius Malema was heard saying, “I will kill you,” while pointing a finger at an MP. Source: SABC

Numerous scuffles broke out on the floor of the meeting in Midrand, South Africa, as a disagreement over the process to elect a new president for the AU’s legislative body boiled over.

The scenes were broadcast on South Africa’s national broadcaster the SABC. The Pan-African Parliament election was suspended while leaders worked out a way forward.

The election had already been postponed last Friday when a staff member working at the venue near Johannesburg tested positive for the coronavirus.

But that meeting last week also first revealed the tensions when South African lawmaker Julius Malema was heard threatening Malian lawmaker Ali Kone in the midst of the sitting.

“I’ll kill you outside. Outside this room, I’ll kill you. I’ll kill you,” Malema, a notoriously fiery leader of a far-left opposition party in South Africa, was heard saying while pointing his finger at Kone.

It all stems from a disagreement between a block of countries from West Africa and a block from southern Africa over whether the presidency should move around the various regions of Africa on a rotational basis.

The last two presidents of the Pan-African Parliament have been from West Africa and there’s never been a president from the south in the short history of the parliament, which came into existence in 2004.

As tempers again frayed today, lawmakers wrestled over a white ballot box at the front of the room that was meant to hold the vote papers for the election.

Two women first fought over the box, trying to rip it out of each other’s hands. Other members of the parliament then joined the tussle.

Then, an enraged male lawmaker ripped off his suit jacket and aimed a kick in the direction of female member Pemmy Majodina of South Africa. The unidentified lawmaker said he was not trying to kick Majodina but rather trying to kick a cellphone out of the hand of another lawmaker recording the chaos on his phone.

“It’s quite a rough and chaotic situation now, and the matter is about the election and rotational principle,” Majodina told SABC.

As the mayhem unfolded, other lawmakers shouted into their microphones that there were “armed men in the room” and called repeatedly for police and security. They claimed that they were being threatened by a group of South Africans with guns. Majodina said there were no guns in the room.

African and international relations expert Dr. Charles Sinkala told the SABC that the scenes, broadcast on television in South Africa, were embarrassing.

“We do not expect elected leaders to behave like such horribles,” he said.

“Look at the footage … it’s adults who need adult supervision.”