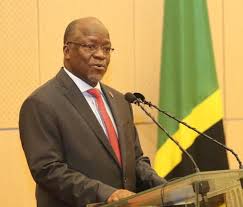 Nzega. President John Magufuli, who is seeking re-election in the October elections, explained why he did not go to Europe in the last five years saying he was busy making sure Tanzania was developing.

Dr Magufuli, who entered the second day of rallies, told a gathering here that his dream is turn the East African nation into another Europe in Africa.

“The last time I travelled to Europe is when I was studying. I did not go to Europe because I knew Europe is also here. The kinds of projects we are undertaking will definitely turn Tanzania into another Europe,” he told the gathering where he asked for votes.

“I will surprise you in the next five years if you vote for me again,” he added at a fully-parked ground.

The projects he was proud of include the ongoing construction of the standard gauge railway (SGR) from Dar es Salaam through the central corridor connecting Tanzania to DR Congo, Rwanda, Burundi and Uganda.

“I want to make Tanzania another Europe so that Europeans would come here to see good things,” he said at the well-attended event.

Dr Magufuli also said he will finish the Lake Victoria water project, which he said is currently at 95 percent of implementation and upon completion it will benefit some 55,000 people of Nzega.

He also said the water project will be extended to Shelui in Singida Region.

He stopped at Shelui in Singida Region before moving on to Igunga, Nzega and Tinde.

At Nzega, he was received by a crowd who were eager to listen to him.

Nzega Urban candidate Bashe, who is also deputy Minister for Agriculture, said a lot of projects were in pipeline for Nzega including ensuring that all people were connected to clean and safe water.

“What we are currently doing is to allow people register with the water authority and get connected so that they pay in instalment,” he said. “We are also planning an agricultural project so that we breed seeds here in Nzega. Once it’s done, the cost of maize seeds will go down from Sh12,000 per two kilo currently to Sh5,000,” he added.