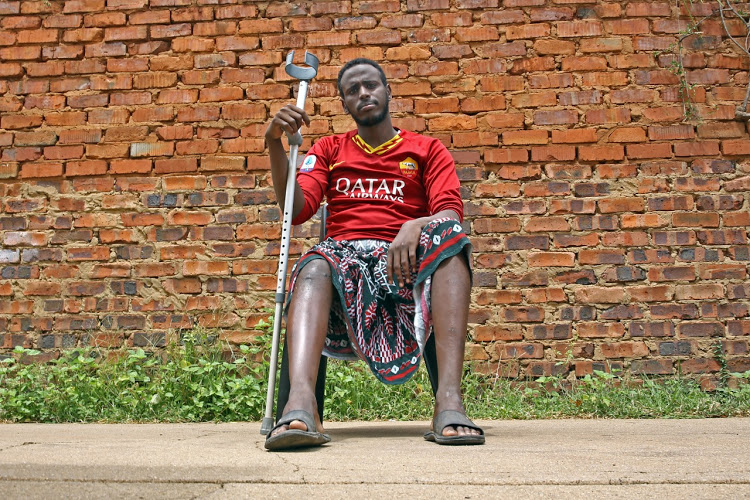 Amir Ahmed Mohammed has a bullet wound on his leg after he was attacked at his Atteridgeville shop last week, along with other foreign shopkeepers.
Image: Thapelo Morebudi / The Sunday Times
Shonisani Tshikalange 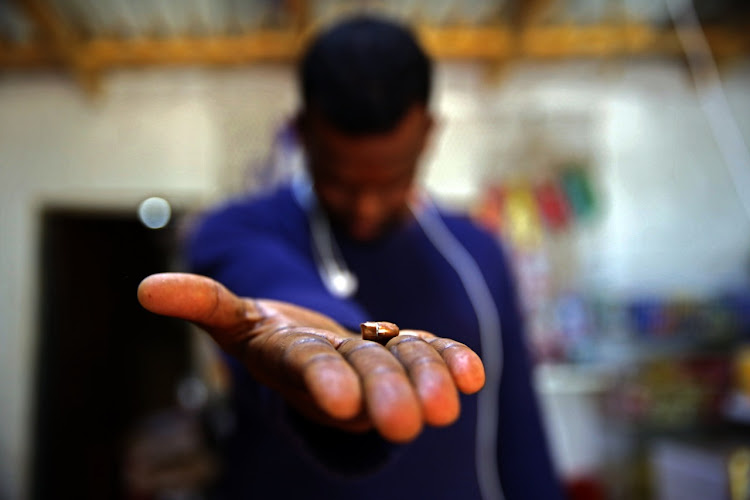 A 26-year-old man holds a piece of bullet after he was one of several Somali shop owners and caretakers who were attacked in Atteridgeville last week.
Image: Thapelo Morebudi / The Sunday Times

Somali shop owners and caretakers are scared for their lives after attacks on their shops on successive days in Atteridgeville, west of Pretoria, last week.

At least six Somalian-owned shops were hit, with more than four Somali nationals being wounded in the incidents.

TimesLIVE has contacted police for say and this story will be updated.

“They break in after midnight and they demand money and start to shoot and fight people. Six shops were attacked and four people were injured,” he said.

Amir Ahmed Mohammed, who has been shot below his right knee in one of the attacks, said the bullet entered his leg and, fortunately, exited.

The 25-year-old said he was sleeping on Thursday in the shop when three “tsotsis” gained access through the roof.

“Three tsotsis shot me in my right leg. I was sleeping inside the shop. I could hear that they were many outside, but only three came in through the roof. They didn’t ask any questions when they entered, they just started shooting at me, demanding money,” he said.

Holding his crutches, the 25-year-old winces from the pain he can still feel from the injury, which has been stitched up and bandaged.

“They collected airtime. They asked me if I have cigarettes and I said no. They shot at me more than once but only one bullet injured me,” he said. “They were not covered on the face but I was scared to look at them, fearing for my life. They left through the roof.” 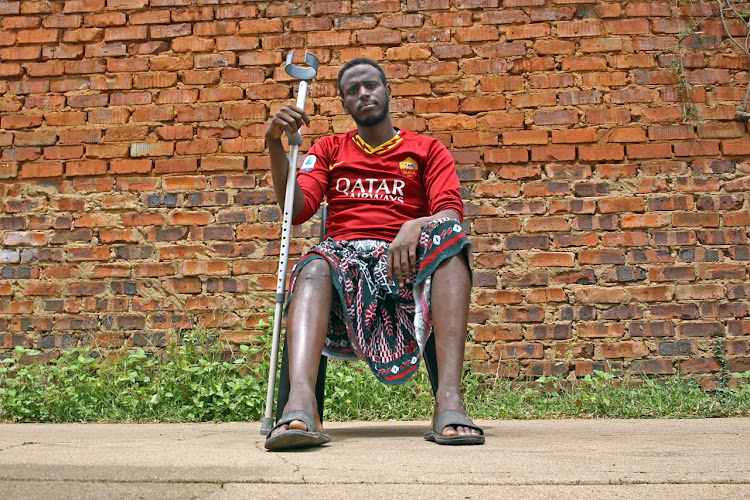 Mohammed said police took a report hours after the incident.

Pointing at an old wound, the 25-year-old said it wasn’t the first time he was robbed.

“I don’t feel safe in SA. I am scared. At night I can’t sleep. There is no peace here. When I tell my parents, who I left back home, that I am injured they are worried. In my country there is no peace, that is why I cannot go back. There are no jobs so I just have to stay here and make a living,” he said.

He said he was scared to go back to the shop after the incident.

“I want to stay in town because the place is not safe. My body is in pain now. When they shot me I was scared. I thought I was going to die,” he said.

Abdihakim Abdullah Mohamud said he was sleeping on Friday in his small room attached to his shop when he heard a loud bang as if something strong was hitting against the concrete wall.

“It was exactly 2am. We were sleeping and we were not expecting anything. We heard a noise against the wall; it was being knocked down.

“Me and my colleague moved to the front of the shop and waited to see what was going to happen. We tried to call our friends. After few minutes they managed to break down the wall,” he said.

The 26-year-old said when the three men came in they started hitting them with the tinned products that were on the shelves.

“They hit us with the tins that we have in the shop, demanding that we give them money. But there was no money in the shop. After few minutes they stopped with the tins and started shooting at us,” he said. 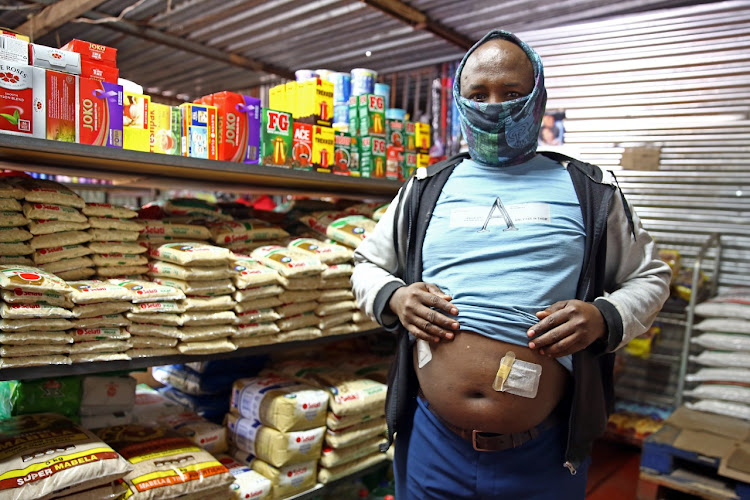 Hassim Muhammad, 33, said he had to live through six armed robberies in and around Gauteng since he moved to the country.
Image: Thapelo Morebudi / The Sunday Times

Mohamud was shot on his right leg, just above his knee.

He said the three men left with airtime, coins and some clothes.

Mohamud said it was not his first gun wound or attack.

I was shot in another shop in 2019 and moved to this one thinking that things will be much better. I am scared.

“I was shot in another shop in 2019 and moved to this one thinking that things will be much better. I am scared. The person that I am working for told me that if I am still not feeling well, I should give him time so that he can find someone to replace me and move me,” he said.

The man, who has been in SA for eight years, said he was only trying to make a living for himself as he has no family.

“The only way I can survive is to be there in the shop. I am just trying to survive. I have stayed in this place for eight years and everyone is nice. They were shocked and after the incident they have been checking up on me,” he said.

Hassiim Muhammad was shot on his stomach on Wednesday.

The bullet penetrated the right side of the 33-year-old’s stomach when he got shot, exiting through the left side and fortunately not causing harm to any organs.

“I was standing outside when the guys came in with guns. They dragged me inside the shop. I fell down and they shot me. I saw them threatening my colleagues with guns, demanding money. I slept in the hospital for two nights,” he said.

Muhammad said after the attack happened the men went out to attack other shops the same night.

“I feel bad because I came here for business and not to die.” he said.

Muhammad said he has had to live through more than four armed robberies in and around Gauteng.

Durban shop owners traumatised after their shops looted, set alight – what we know so far

One of the family members of the men who is still in hospital undergoing treatment after being attacked in the shop had to travel all the way from Bloemfontein.

Ali Ahmed said he received a call about the shooting of his brother early in the morning while still sleeping.

“Sunday, 4am, I got a call from a friend in Pretoria west, telling me that my brother was seriously injured and in hospital. I was in Bloemfontein, I had to wake up and ask someone to drop me off on N1 and stood there waiting to catch a lift. I came to Pretoria in a hurry to check on my brother,” he said.

Ahmed said he couldn’t see his brother as he was still in the hospital and he has been waiting to see him close to five days.

“I can’t sleep, I am worried but at least I was able to ask a nurse to give him a phone and I can call him,” he said.

He said his brother said he had to undergo two operations.

‘The attacks are xenophobic’

Daniel Byamungu Dunia, executive director of the NGO African Solidarity Network, said the attacks on foreign nationals and their stores was still happening around the country, including in Durban.

“People are still attacking foreign nationals with the aim of removing them from the eThekwini municipality. They don’t want them to trade and want all the trading business to be taken by local South African citizens,” he said.

Dunia said the attacks were a result of the government’s failure to protect non-South African citizens.

“The mayor and his team, they first resolved the matter, so what happened is that the attacks continued and it was a result of a failure from the government to protect the refugees, asylum seekers  and foreign nationals in general,” he said.

He said the attacks are xenophobic as they target foreign nationals.

“The attacks are xenophobic because they only target the foreign nationals. And remember we are heading to our local elections. If the attacks don’t stop, if there are no strong measures to address them — the next step, since the government is failing to address the attacks, will be for foreign nationals to stand and defend themselves — and the fear is that we will have a bloodbath in the province,” he said.

Somalia among the most corrupt states in the world