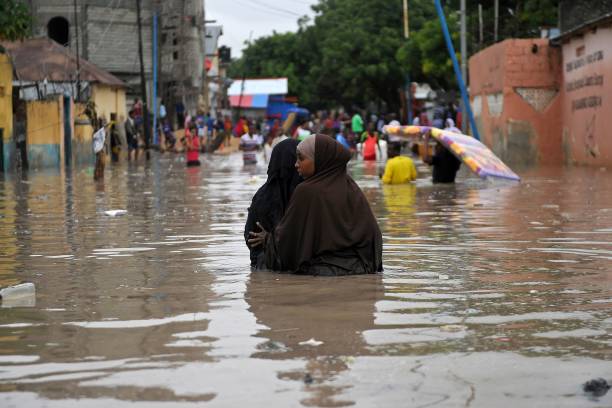 Locals wade through a flooded street after bursting of a river in Beledweyne, central Somalia, May 17, 2020. At least 24 people have died while 858, 667 others have been affected by heavy rains and riverine floods in Somalia, the UN Office for the Coordination of Humanitarian Affairs said on May 15. /Xinhua

The recent torrential rains across Somalia have affected around 166,000 people, the United Nations humanitarian agency said on Monday.

The UN Office for the Coordination of Humanitarian Affairs (OCHA) said while the rains have reduced in some areas, it is alarming that Somalia has been hit by a double climate disaster, with drought declared on April 25 and recent heavy rains causing riverine and flash flooding.

According to OCHA, the combined impact of drought and floods is likely to exacerbate the already critical food security situation in Somalia, where more than 2.7 million people are projected to be food insecure.

“Furthermore, these climate shocks will cause displacement, jeopardize access to safe water, contribute to an increase of water-borne diseases and negatively impact livelihoods,” OCHA said in its latest Floods Update report released in Mogadishu.

The UN said key air and road transportation routes have been affected, impacting on the availability of food supplies and partners’ ability to reach affected populations.

It said the 2021 Somalia Humanitarian Response Plan requires 1.09 billion U.S. dollars to assist four million people but is only 19 percent funded as of Sunday.

On May 9, the UN agency said at least 25 people were killed from May 3 to 9 due to heavy rains which were pounding several parts of Somalia.