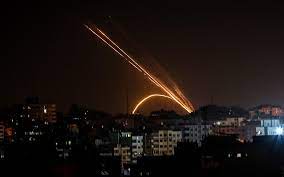 Three people, including a child, have been injured near Tel Aviv as a volley of rockets was fired towards the city, a local ambulance service told Sputnik.

A Sputnik correspondent earlier reported that the air raid sirens went off in Tel Aviv as dozens of rockets could be seen being intercepted in the sky by the Iron Dome missile defence system.

Soon after the alert, Hamas said it had fired 130 rockets towards Tel Avivhttps