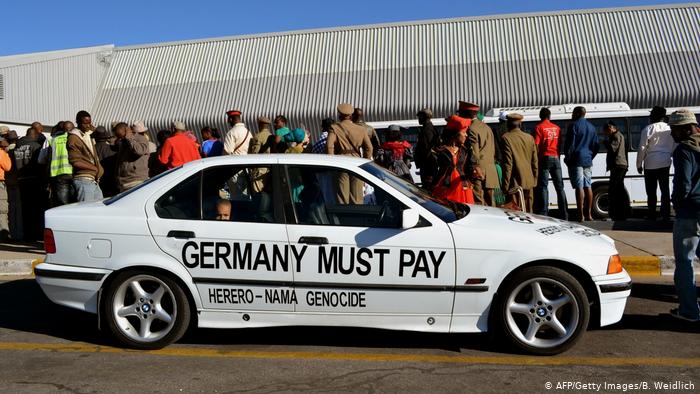 The German colonial empire committed indescribable crimes in countries like Namibia, Tanzania and Burundi. A century on, former colonies are now demanding reparations, placing mounting pressure on the federal government.

More than a century since Germany’s colonial empire committed numerous atrocities on the African continent, the federal government is being forced to contend with its past head on.

Beginning in 2015, negotiations have been ongoing between Namibia and Germany concerning reparations for the genocide of the Herero and Nama ethnic groups in the early 1990s. But although both sides have met on several occasions, very little has been achieved. Meanwhile, Tanzania has accused German troops of committing war crimes while suppressing the Maji Maji uprising between 1905 and 1907 and is also asking for reparations. Now Burundi is urging both Germany and Belgium to pay €36 billion ($42.6 billion) in reparations for “aggressions” committed during the time of colonial rule.

Jürgen Zimmerer, a professor of African history at the University of Hamburg, says the push for reparations was a long time coming. “Berlin was surprised by the demands, although it was foreseeable for a long time that this important chapter cannot be swept under the carpet,” he told DW.

On the one hand, Germany has imposed high moral standards when it comes to coming to terms with its own past. On the other hand, it is reluctant to act when faced with its colonial-era crimes committed in Africa.

Between 1885 and 1919, Germany was the third-largest European colonial power in Africa after the United Kingdom and France. The German Empire stretched from South West Africa (modern-day Namibia) to German East Africa (which comprised the territory of today’s Burundi, Rwanda, and Tanzania, excluding the island of Zanzibar), as well as areas in modern day Togo, Ghana and Cameroon. The empire only lasted a little more than three decades. After it lost the First World War, the German Reich had to cede its colonies to the victorious powers. This illustration from 1904 is entitled “Captain Franke fighting the Hereros”

“Although it was a short period, the German colonial system was very radical,” says Zimmerer. “The colonies had to be conquered de facto everywhere, because there was resistance everywhere, which was brutally suppressed by the German side.”

For the past five years, Germany has been negotiating with Namibian authorities over a formal apology for the crimes committed during the colonial era, alongside reparation payments.

Representatives of the Herero and Nama are clear that they want an official apology from Berlin, but there have been disagreements over which form — and which label — the reparations should take.

“Germany wants to face its political and moral responsibility for the crimes committed between 1904 and 1908,” Ruprecht Polenz, the federal government’s Special Commissioner for the Dialogue with Namibia, told DW. But from the perspective of the federal government, however, he says it is not a legal issue: “This has also been stated several times by courts to which parts of the Herero and Nama have referred. It is a political-moral question and it follows from this that we choose terms in the text and declarations that express this and not terms that are legal in a narrower sense.” Polenz adds that Germany would prefer to apologize for the crimes sooner rather than later. Following in Namibia’s footsteps, Burundi has also asked for €36 billion ($42.86 billion) as compensation for crimes committed during the colonial era. A group of experts appointed by the Burundian Senate is preparing a report.

Aloys Batungwanayo, a Burundian historian and a professor at the University of Lausanne, considers the compensations to be justified in light of “German aggression” in Burundi.

“We accuse Germany of brutal aggression against the Burundian population,” he told DW.  During the colonial era, Germany subdued the Burundi militarily. Now, 100 years later, the main concern is “that Germany accepts that it is necessary to thoroughly research the consequences of its colonial policy and find a solution on how both sides should deal with it in the future.”

Tanzania: Memory of the victims of the Maji Maji uprising

Tanzania is also putting increasing pressure on the German government to take responsibility for war crimes during the colonial era in East Africa. In early 2020, the Tanzanian ambassador to Germany, Abdallah Possi, called on the federal government to “negotiate reparations” for crimes committed by Germany in East Africa — including massacres of a number of ethnic groups who were unable to overwhelm the German occupiers during the Maji Maji uprising. Achilles Bufure, the director of the Tanzanian National Museum in Dar es Salaam, told DW that it was imperative to research the consequences of Germany’s colonial policy and war crimes. As museum director, however, he is also concerned with another important topic: The return of countless stolen art objects and cultural assets.

“It would be a very good first sign if, for example, the large dinosaur skeleton that is on display in the German Museum of Natural History in Berlin is returned to its original location in Tanzania,” he said.

The Tanzanian government plans to reclaim countless objects and human remains that are currently kept in German museums. Numerous skulls and bones were brought to Germany from the former colony. Many of the bones and cultural objects belonged to people who had rebelled against Germany in the Maji Maji War.