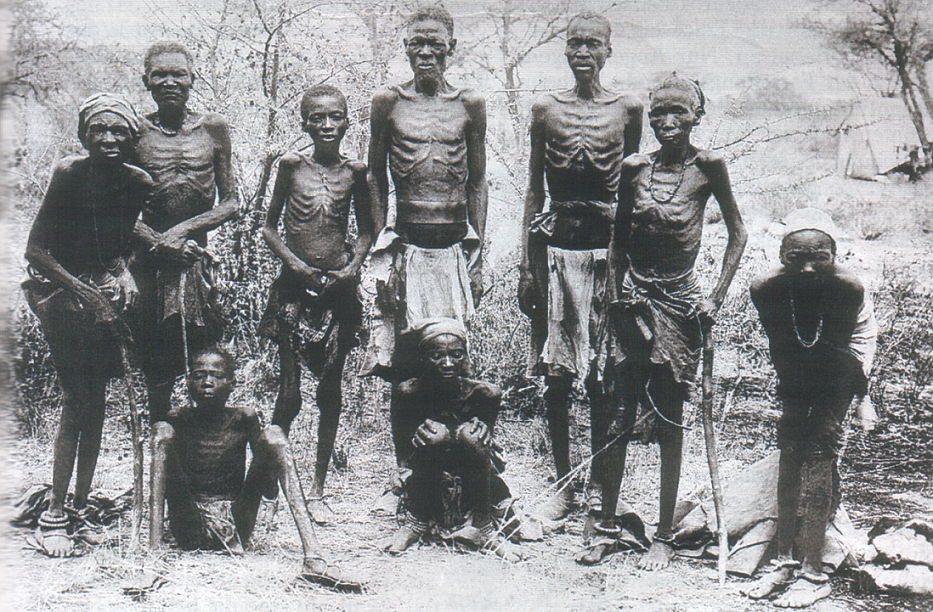 Our spring issue, “Pandemic Politics,” is out now. It features over 120 pages of beautiful illustrations and quality writing and analysis. Get a discounted subscription today!

Germany is often commended as the world leader in remembrance. The “German model” has gained international recognition as an exemplary path toward historical accountability for the crimes of the Nazi Holocaust. And yet, a country that has done much reckoning with one traumatic period in its past has largely failed in confronting another painful history — the legacy of German colonialism. Various attempts at addressing this historical blind spot, whether by victims’ advocates, citizen initiatives, or parliamentary groups, have long been met with empty promises, silence, or outright rejection.With the recent wave of protests for racial justice in the aftermath of the killing of George Floyd, it has again become clear how deeply rooted current forms of racism are, following from a long history of racialized violence. And Germany is far from innocent in this regard. The flawed negotiations over reparations for the country’s colonial crimes show how the failure to remedy past harms continues to incur pain and trauma in the present.

The History of Genocide

While the German Empire was comparatively short-lived, its henchmen committed unspeakable acts of violence. In the former colony of German South West Africa — today’s Namibia — colonial troops carried out the first genocide of the twentieth century against the Ovaherero and Nama people.

From 1884, they had seized large portions of the indigenous lands and livestock and subjected men, women, and children to harsh labor and other forms of punishment. When, in 1904, the Ovaherero resisted, the German forces brutally suppressed the uprising and immediately afterwards issued an extermination order. According to Imperial Order 3737, “Every Herero found inside the German border, with or without a gun or cattle, will be shot.”

In addition to these killings, a telegram sent from the Imperial Chancery in January 1905 records the first use of concentration camps. Foreshadowing the crimes of the Nazi Holocaust, the Konzentrationslager were set up to cause “death by exhaustion” — through starvation, forced labor, malnutrition, sexual violence, medical experiments, and disease.

This “genocide by written order” — as it has been termed by Veraa Barnabas Katuuo, founder of the Association of Ovaherero Genocide in the USA — left 65,000 Ovaherero dead by 1908. Similar tactics were used against the Nama when they pushed back against colonial rule, resulting in 10,000 deaths.

Representatives of the Ovaherero and Nama have long requested a formal acknowledgement and apology from Germany for these crimes against humanity. Germany has thus far refused both — instead asking “for forgiveness for the events.”

While the United Nations’ 1985 Whitaker Report officially deemed the massacre against the Ovaherero and Nama a “genocide,” Germany accepted this only in 2016 — and with an important disclaimer. The Federal Foreign Ministry argued that it was not possible to legally codify the crime of “genocide” for events that had occurred before the Holocaust. Still today, the German government insists that its use of the term genocide in the context of Namibia is strictly “political-moral” rather than judicial.

While this kind of political maneuvering has allowed Germany to avoid liability for reparations, the country did enter bilateral negotiations with the Namibian government in 2015. Now, five years later, Germany is for the first time prepared to offer reparation payments, thereby hoping to settle the matter once and for all.

The Ovaherero and Nama, however, who had originally petitioned for the intergovernmental consultations, remain skeptical. Since the Namibian government under the SWAPO party, which is dominated by the Ovambo — an ethnic group not affected by the genocide — controls the negotiations and any resulting payments, the Ovaherero and Nama have effectively been excluded from the process.

Faced with this impasse, they are now setting their hopes on a class-action lawsuit. As the appointed representative of the Ovaherero people in the United States, Mr Katuuo filed the suit together with the paramount chief of the Ovaherero, Vekuii Rukoro, and Nama chief David Frederick as the lead plaintiffs before the US Federal Court in New York City in 2017.

That a US court has jurisdiction in the matter is not a simple judicial technicality, but is owed to a particular historical event that manifests the longevity of colonial practices and racialized violence. For it is in the US — in the American Museum of Natural History (AMNH) in New York City — that the remains of at least two victims of the German genocide in Namibia are kept.

When Mr Katuuo was finally granted access to the AMNH archives in 2017, he took photographs of the two skulls bearing hand-written inventory numbers and the label “Herero.” The black ink on pale bone runs next to conspicuous scrape marks. The colonial officers, who had collected the severed heads of the dead, forced Ovaherero women to boil the skulls and scrape off any remaining flesh using glass shards. A German lieutenant, Graf Schweinitz, who witnessed these crimes, wrote that the “cooking of the dead and the violent screams of insanity will echo forever in the hallowed silence of eternity.”

The skulls had made their way to the United States via several detours. After their first “processing,” they were shipped off to Germany for anthropogenic studies. In 1906, most of them were added to the collection of Austrian-born anthropologist Felix von Luschan, a member of the German Society for Racial Hygiene and the infamous inventor of the “von Luschan scale,” a chromatic scale used for racial classifications based on skin color.

While von Luschan’s public collection — a total of 6,300 skulls, of which only 800 have been repatriated to Namibia — is still housed in Berlin, his wife sold his entire private collection to the AMNH after his death in 1924. The purchase effectively doubled the museum’s physical anthropology holdings.

The two skulls labeled “Herero,” which had been taken by Germany in violation of international law more than a century ago, have now been introduced as evidence in the lawsuit filed by the Ovaherero and Nama. For Mr Katuuo, it is a given that the remains of his ancestors need to be repatriated to Namibia, where they could either be properly buried or exhibited in a display that teaches people about the history of the genocide. To keep the bones where they are, stored away in cardboard boxes in a museum basement, would merely protract the vile history of colonial “collecting.”

But the repatriation of human remains is only one step in a long process toward justice. As descendants of the victims of genocide and the legitimate representatives of all Ovaherero and Nama people — not only in Namibia but in Botswana, South Africa, and worldwide — the paramount chief of the Ovaherero and the Nama traditional leadership also demand that they are granted a seat at the negotiating table. As Dr Ngondi Kamatuka, president of the Association of the Ovaherero Genocide in the USA, puts it, supporting the quest of his people by including them in the Namibian-German conversations means “to be on the right side of history.”

The plaintiffs also want the German government to address the “incalculable damages” that colonial violence caused the Ovaherero and Nama people. Crucially, this goes beyond reparations payments and taps into concepts of transitional justice.

One way forward, they suggest, would be to redistribute agricultural land in Namibia. This would deal with the fact that the diminished political power of the Ovaherero and Nama since German colonialism is in part the result of colonial land grabbing. Prior to the arrival of the Germans, most agricultural land in Namibia had been communally owned by the nomadic Ovaherero, and the colonizers had contractually been granted the right to settle in limited areas. However, they soon broke these contracts and unlawfully seized over 25 percent of the lands, which were also the most fertile grazing lands for cattle.

By 1990, when Namibia gained independence, half of the country’s agricultural land was owned by a mere 0.2 percent of the population, most of them white farmers. For the Ovaherero and Nama, a land reform that redresses this imbalance to ensure the economic wellbeing of their people is vital. Unlike the SWAPO government’s Agricultural Land Reform Act of 1995, which favors the Ovambo people in resettlement processes, they want to see a fair chunk of ancestral lands transferred to the Ovaherero and Nama. The success of the class-action lawsuit in New York, which demands “the return of the assets and property that was looted and confiscated,” is essential here.

Yet the resolution to the case is now up in the air. In March 2019, US district judge Laura Taylor Swinn ruled that Germany was immune from the claims by the Ovaherero and Nama. But the plaintiffs are not ready to give up and have since filed an appeal with the Second Circuit US Court of Appeals. While the coronavirus pandemic has made the timing of the judicial proceedings less predictable, the lawsuit is still expected to continue this year.

And Mr Katuuo sees reason for hope. He points out that in the past the Ovaherero and Nama have received much support from the German people — both individuals and organizations like the citizen initiative Berlin Postkolonial e.V., which he considers critical to moving the German government in the right direction.

What is more, in tune with calls for racial justice in the US and elsewhere, many Germans are now shifting the conversation about contemporary racism to address not only individual harm but also expose racism’s institutionalized dimensions. And there is a growing understanding that in order to undo systemic racism, Germany must confront its history of past racial violence as well.

Reparations payments are at the heart of this process. On June 20, the Nama Traditional Leaders Association and the Herero Traditional Authority in the Republic of Namibia issued a joint press statement, in which they voiced their support for the global reparations movement. They are also calling for the removal and ban of all colonial symbols in Namibia and express their “unreserved solidarity” with the Black Lives Matter protests.

This does not only highlight the fact that colonialism has incurred both a material and a moral debt. It also goes to shows that the German government’s practice of excluding the victims’ descendants from the negotiating table has deepened racial injustice in the present.

Maresi Starzmann is a researcher for the Reshaping Prosecution program at the Vera Institute of Justice.