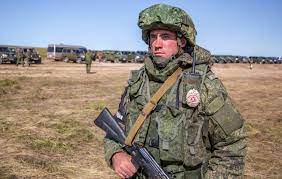 Tensions have increased between Paris and the country’s military junta in recent weeks, including over the fate of European forces deployed in the region to fight militants.

The US army last week estimated hundreds of Wagner personnel were in the Sahel state, but the country’s ruling army have said this is not true.

“They are already at the moment using the country’s resources in exchange for protecting the junta. They are despoiling Mali,” he told the Journal du Dimanche newspaper.

“Wagner uses the weakness of certain states to implant itself… to reinforce Russia’s influence in Africa,” Le Drian added, though he said it did not seek to replace the Europeans in the region.

The French foreign minister did not say what would happen to a European force deployed in the area to fight militants after Mali’s rulers succeeded in expelling a contingent of Danish troops this week.

“We are speaking to our partners to see what kind of response” is needed, he said.

“Our fight against terrorism must continue — but probably under different conditions,” he added.

Asked if this meant a withdrawal from Mali, he answered: “I did not say that.”