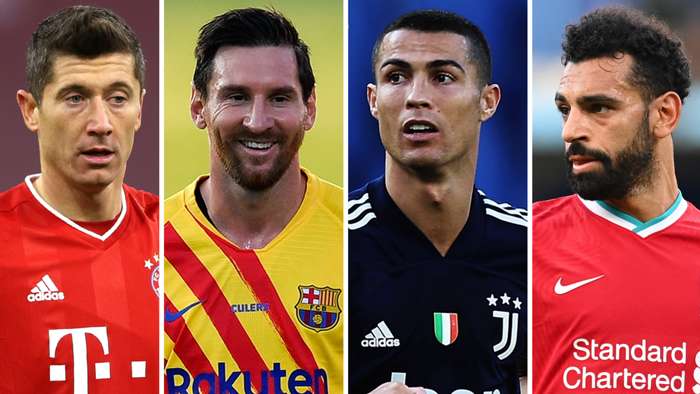 25/11/2020
A whole host of familiar names are up for this year’s individual prize, which will be awarded to the player who receives the most public votes

The final shortlist for the 2020 FIFA The Best Men’s Player of the Year award has been revealed, with Robert Lewandowski, Lionel Messi, Cristiano Ronaldo and Mohamed Salah all nominated for the prize.

Barcelona superstar Messi, who won the accolade last year, leads the 11-man list of players up for the individual gong, which will be presented at The Best FIFA Football Awards ceremony on December 17.

Bayern striker Lewandowski is the man best placed to dethrone the Argentine, having already won the UEFA Men’s Player of the Year Award after firing the German outfit to Champions League glory in 2019-20.

The Polish striker is joined on the list of nominees by ex-team-mate Thiago Alcantara, who left Allianz Arena to join Liverpool in September, while Reds duo Sadio Mane and Virgil van Dijk have also made the final cut alongside Salah.

Manchester City‘s Kevin De Bruyne completes the list of Premier League stars competing for the award, while Real Madrid have bagged just the one nomination, with club captain Sergio Ramos acknowledged for leading the Blancos to their 34th La Liga title last season.

Former Santiago Bernabeu favourite Ronaldo will be aiming to win the FIFA honour for the third time after another fine individual campaign at Juventus, and PSG duo Neymar and Kylian Mbappe have also been included after playing starring roles in the French outfit’s run to the European Cup final.

The final nominees for the Best FIFA Men’s Goalkeeper have also been announced, with Alisson, Thibaut Courtois, Keylor Navas, Manuel Neuer, Jan Oblak and Marc-Andre ter Stegen all in contention for the prestigious title.

Leeds United head coach Marcelo Bielsa is the surprise name on the Best FIFA Men’s Coach shortlist, with the Argentine boss grouped together with Hansi Flick, Jurgen Klopp, Julen Lopetegui and Zinedine Zidane ahead of next month’s vote.

The nominees for the same three categories in the women’s game have also been published, as Lucy Bronze, Pernille Harder, Ji So-yun, Sam Kerr and Vivianne Miedema have all been recognised for their stellar performances over the past 12 months.