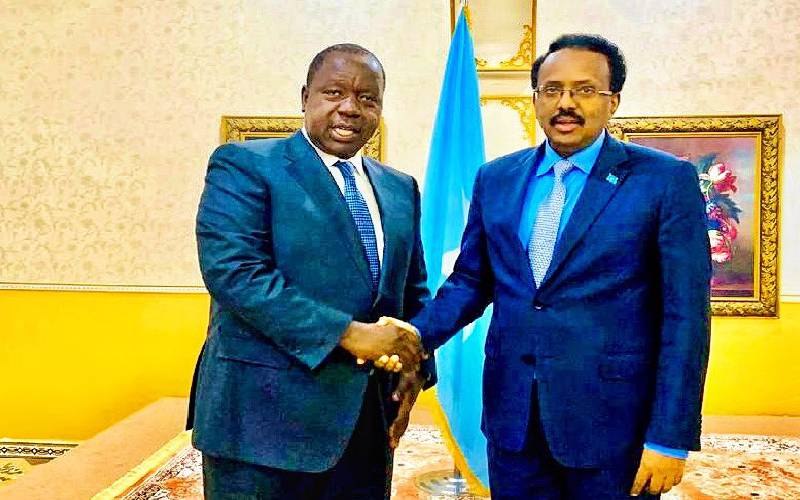 The European Union has asked Kenya and Ethiopia to organise a security summit on cross-border cooperation following tensions on the Kenya-Somalia border.

Mandera County in Kenya, which is near the border, has been tense for more than a week now following clashes between Jubbaland forces and those loyal to the Federal Government of Somalia.

In a declaration on March 14, the EU said attacks about a fortnight ago in the Gedo region have created instability and resulted in causalities and large scale displacement of civilians.

“This has had a severe humanitarian impact notably on vulnerable women and children,” it said in the statement.

In Mandera, one person died while at least 10 were injured in clashes that saw some Jubbaland soldiers cross over into Kenya reportedly after being overpowered.

Property was destroyed and some residents fled from their homes in fear of a serious conflict.

Kenya and Somalia have also traded accusations, with President Uhuru Kenyatta accusing Somalia of violating its territorial integrity and the latter accusing Kenya of interfering with its internal affairs.

The EU lauded this move, saying such a meeting is important in de-escalating disagreements.

“An anticipated summit between the heads of state and government of Somalia and its neighbours is urgent. It should consider incorporating steps to verify and monitor the situation on the ground as a confidence-building measure,” the union said.

The EU further noted that the fighting has fuelled tension and diverted assets and attention from military operations against Al-Shabaab terrorists in Lower and Middle Shabelle, thus jeopardising efforts for stability in Somalia.

It also said that fighting has also been detrimental to Somalia’s relationships with its neighbours and partners, hence the need for President Farmaajo, federal states in that country and regional partners to fully cooperate and ensure and end to violence.

“Lasting solutions must be found to safeguard ongoing efforts to degrade Al-Shabaab, build-up integrated Somali security forces and create a secure and enabling environment for state-building and development.”

Further, all parties involved were asked to do everything possible to reduce tensions, exercise restraint, respect the integrity of sovereign borders and seek peaceful resolution of their differences.

“The European Union underlines the importance of stability and good cooperation among Ethiopia, Kenya, and Somalia in their common border area where they have shared interests,” the council added.

The Intergovernmental Authority on Development (Igad) was asked to facilitate a meeting of the neighbouring countries as an urgent discussion on the state of implementation of agreed joint priorities in the political and security sphere is needed.

“This discussion is an important element to continue to strengthen effective cooperation between Somalia and its international partners in the spirit of mutual accountability and partnership,” the EU said.

So what if the Ottomans shaped the modern world?